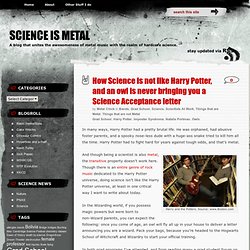 He was orphaned, had abusive foster parents, and a spooky nose-less dude with a huge-ass snake tried to kill him all the time. Harry Potter had to fight hard for years against tough odds, and that’s metal. Harry and the Potters. Source: www.Boston.com And though being a scientist is also metal, the transitive property doesn’t work here. In the Wizarding world, if you possess magic powers but were born to non-Wizard parents, you can expect the following: once you come of age, an owl will fly all up in your house to deliver a letter announcing you are a wizard.

In both grad programs I’ve attended, and from reading many a grad student forum on the internet, I see a lot of students make the same mistake I did. For years before grad school, I contributed to quality research, all the time waiting for some sort of external confirmation that I was finally ready to be a scientist, that I had enough skills and experience to be Worthy. 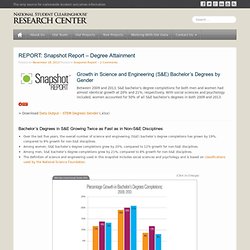 With social sciences and psychology included, women accounted for 50% of all S&E bachelor’s degrees in both 2009 and 2013. > Download Data Output – STEM Degrees Gender (.xlsx) Why Most Of This College's Engineering Students Are Women. In 2013, only 19 percent of fresh-faced college graduates with engineering degrees were women, according to the National Student Clearinghouse Research Center. 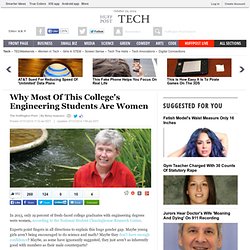 Experts point fingers in all directions to explain this huge gender gap. Maybe young girls aren't being encouraged to do science and math? Maybe they don't have enough confidence? Maybe, as some have ignorantly suggested, they just aren't as inherently good with numbers as their male counterparts? But at Harvey Mudd College just 30 miles east of Los Angeles, that ratio isn't a problem. The Huffington Post sat down with Maria Klawe, Harvey Mudd's first female president, to ask how the school attracts more women to its engineering programs. Her answer: It's easier than you think. I heard you speak Fortune Brainstorm about ways to get more women into engineering, and you mentioned this idea of making engineering classes less "testosterone-filled" and turning them into creative, problem-solving classes.

Unhooking the Bra of Objectification. The internet is buzzing with debate about whether it’s OK for women to dress ‘sexy’ for Halloween parties. 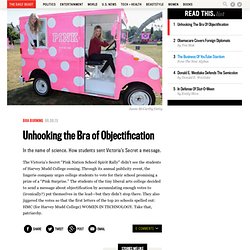 Surely this should be one day of the year where anything, and everything, goes. Americans, particularly younger and left-leaning ones, turn redder than a KitKat wrapper at the mention of sexy Halloween costumes. From Jezebel to The Daily Show, news outlets of varying stripes have lamented and mocked the array of sexy (some would say slutty) Halloween costumes for women. Sure, there is the sexy witch and the sexy nurse, but for those who want to be a bit more esoteric, there is the sexy dark Roman goddess. For the outdoorsy type, there is the sexy lady lumberjack. Certainly, these costumes are easy to laugh at, but the time to rail against them has come and gone. The Society of Women Engineers. 2010-04_IW_European_Engineering_Report_02.pdf. Why Aren't More Girls Attracted To Physics? : All Tech Considered. Hide captionGirls are more likely to take high school physics if they see women in their communities working in science, technology, engineering and math, a new study finds. 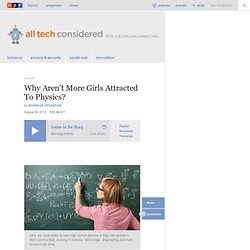 Dominik Pabis/iStockphoto.com Girls are more likely to take high school physics if they see women in their communities working in science, technology, engineering and math, a new study finds. You don't need to be a social scientist to know there is a gender diversity problem in technology. The tech industry in Silicon Valley and across the nation is overwhelmingly male-dominated. That isn't to say there aren't women working at tech firms. Visit Silicon Valley and you will hear many people talk about the need to increase the number of female hackers. A new study by University of Texas sociologist Catherine Riegle-Crumb in the journal Social Science Quarterly offers an interesting new perspective on this divide.

There are some obvious things that could cause those variations. Study shows gender bias in science is real. Here’s why it matters. It’s tough to prove gender bias. 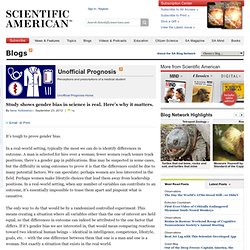 In a real-world setting, typically the most we can do is identify differences in outcome. A man is selected for hire over a woman; fewer women reach tenure track positions; there’s a gender gap in publications. Bias may be suspected in some cases, but the difficulty in using outcomes to prove it is that the differences could be due to many potential factors. We can speculate: perhaps women are less interested in the field.

Perhaps women make lifestyle choices that lead them away from leadership positions. The only way to do that would be by a randomized controlled experiment. But in a groundbreaking study published in PNAS last week by Corinne Moss-Racusin and colleagues, that is exactly what was done. The scientists also offered lower starting salaries to the “female” applicants: $26,507.94 compared to $30,238.10. This is really important. We are not talking about equality of outcomes here; this result shows bias thwarts equality of opportunity.