The condition of Women

Saudi Men Buying Syrian Refugee Children as Brides and Prostitutes. Muslim GirlsPhoto: Paul Chesley/Getty Everyone's heard about the fighting in the Syrian civil war, but there have been too few stories about how the Syrian civil war has affected the women and children left behind by the men who have gone off to fight. 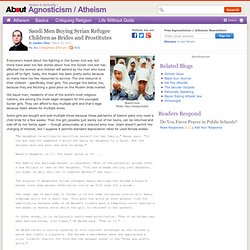 Sadly, the impact has been pretty awful because so many have too few resources to survive. The one resource is their children - specifically, their girls. The younger the better, too, because they are fetching a good price on the Muslim bride market. Old Saudi men, residents of one of the world's most religious nations, are among the most eager shoppers for the youngest Syrian girls. Some girls are bought and sold multiple times because these patriarchs of Islamic piety only need a child bride for a few weeks. "My daughter is willing to sacrifice herself for her family," Nezar says. Video: Bangladeshi sex workers take steroids to 'plump-up' for clients. Mother’s Labor-Camp Sentence Sparks Fury - China Real Time Report. 11-year-old girl married to 40-year-old man. By Samuel Burke, CNN Before their wedding ceremony begins in rural Afghanistan, a 40-year-old man sits to be photographed with his 11-year-old bride. 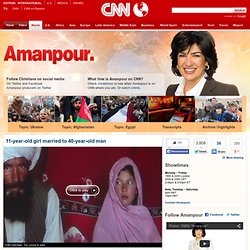 The girl tells the photographer that she is sad to be engaged because she had hoped to become a teacher. Her favorite class was Dari, the local language, before she had to leave her studies to get married. She is one of the 51 million child brides around the world today. And it's not just Muslims; it happens across many cultures and regions. Photographer Stephanie Sinclair has traveled the world taking pictures, like the one of the Afghan couple, to document the phenomenon. Faiz, 40, and Ghulam, 11, sit in her home prior to their wedding in rural Afghanistan in 2005. Amanpour asked Sinclair if the 11-year-old Afghan girl married in 2005, and others like her, consummate their marriages at such an early age. Sinclair has been working on the project for nearly a decade. "Whenever I saw him, I hid.

In Yemen, a similar picture. 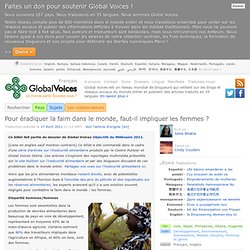 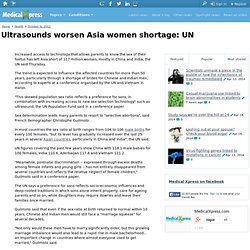 The trend is expected to influence the affected countries for more than 50 years, particularly through a shortage of brides for Chinese and Indian men, according to experts at a conference organised by the UN and Vietnam in Hanoi. "This skewed population sex ratio reflects a preference for sons, in combination with increasing access to new sex-selection technology" such as ultrasound, the UN Population Fund said in a conference paper. Sex determination leads many parents to resort to "selective abortions", said French demographer Christophe Guilmoto. 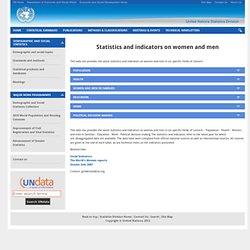 The data have been compiled from official national sources as well as international sources. All sources are given at the end of each table, as are technical notes on the indicators presented. Related links: Facts & Figures - Women, Poverty & Economics - Gender Issues: HIV/AIDS. World Wide Status of Women. Each year, 1/2 million women die from pregnancy complications and 100,000 from unsafe abortions. 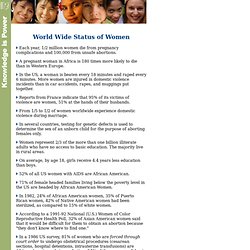 A pregnant woman in Africa is 180 times more likely to die than in Western Europe. In the US, a woman is beaten every 18 minutes and raped every 6 minutes. More women are injured in domestic violence incidents than in car accidents, rapes, and muggings put together. Reports from France indicate that 95% of its victims of violence are women, 51% at the hands of their husbands.

From 1/5 to 1/2 of women worldwide experience domestic violence during marriage. In several countries, testing for genetic defects is used to determine the sex of an unborn child for the purpose of aborting females only. Women represent 2/3 of the more than one billion illiterate adults who have no access to basic education. On average, by age 18, girls receive 4.4 years less education than boys. The World's Women 2010: Trends and Statistics - Wikigender.org. From wikigender.org Background The World’s Women 2010: Trends and Statistics is the fifth issue of The World’s Women and was produced by the United Nations to coincide with the first-ever World’s Statistics Day, 20 October 2010. 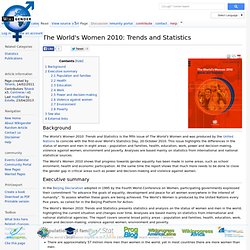 This issue highlights the differences in the status of women and men in eight areas – population and families, health, education, work, power and decision-making, violence against women, environment and poverty. Analyses are based mainly on statistics from international and national statistical sources. The World’s Women 2010 shows that progress towards gender equality has been made in some areas, such as school enrolment, health and economic participation. Women leader. Les femmes, actrices essentielles dans les révolutions arabes.