Women will be extinct in the computer science world if this trend continues. Today, computer and information technology is advancing faster than at any time in human history. 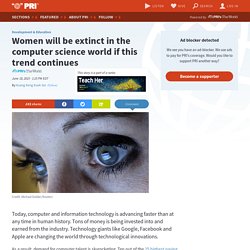 Tons of money is being invested into and earned from the industry. Technology giants like Google, Facebook and Apple are changing the world through technological innovations. As a result, demand for computer talent is skyrocketing. Ten out of the 25 highest paying jobs in demand listed by jobs website Glassdoor this year require a high level of computer skills. Out of the 25 best jobs in America identified by the same website, which were ranked based on earning potential, career opportunities and number of job openings, seven were computer science-based. However, if you are a female student in America, the chances of you joining this boom are slim. Similar to other science and technology subjects, the number was climbing up rapidly from 1971 at 13.6 percent and peaked in 1984 at 37.1 percent.

Then came the computer games on personal computers. To explore NCES data, click here. How one college went from 10% female computer-science majors to 40% Twelve years ago, after an epic legal battle over the University of Michigan’s affirmative action admissions policy in its law school and undergraduate school, the Supreme Court upheld the importance of student body diversity for the institution’s educational mission and the need to consider race as a factor in admissions. 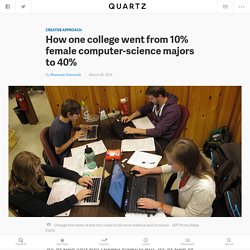 The case, Grutter v Bollinger (2003), which also relied on a prior case that dated back to 1978, University of California v Bakke, cited extensive evidence about the importance of a racially and ethnically diverse student body. However, in 2012 the Supreme Court reopened the issue, with the Fisher v University of Texas case. Abigail Fisher is a white female applicant who applied to the university in 2008 and was denied admission. She then sued the University of Texas at Austin on the grounds that the university’s race-conscious admissions policy violated the equal protection clause of the Fourteenth Amendment.

Can diversity be achieved by ignoring race? National Center for Women & Information Technology. Empowering girls to be future technology leaders. Want to Get More Girls Into STEM? Give Them Real-World Work. A screen grab from Burlington High School’s Help Desk video, “All the Techie Ladies,” produced by the female members of the team. 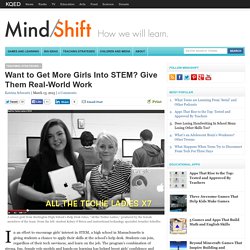 From the left: student Kelsey O’Brien and instructional technology specialist Jennifer Scheffer. In an effort to encourage girls’ interest in STEM, a high school in Massachusetts is giving students a chance to apply their skills at the school’s help desk. Students can join, regardless of their tech savviness, and learn on the job. The program’s combination of strong, fun, female role models and hands-on learning has helped boost girls’ confidence and excitement about tech. The all-student run Help Desk is part of Burlington High School’s Student Technology Innovation and Integration course. “It’s great you have this great coursework, but what’s the real-world application of these skills?”

“Help Desk is not a real-world simulation,” said senior Cat Hoyt, “Help Desk is the real world.” “They’re hard, but fun,” said Kelsey O’Brien of her STEM classes. #SXSWedu: Code like a girl. The 2015 SXSWedu Conference and Festival is in full swing in Austin, Texas. 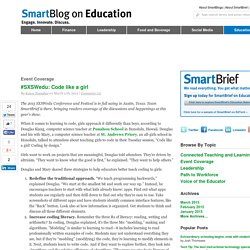 Team SmartBrief is there, bringing readers coverage of the discussions and happenings at this year’s show. When it comes to learning to code, girls approach it differently than boys, according to Douglas Kiang, computer science teacher at Punahou School in Honolulu, Hawaii. Douglas and his wife Mary, a computer science teacher at St. Andrews Priory, an all-girls school in Honolulu, talked to attendees about teaching girls to code in their Tuesday session, “Code like a girl! Coding by design.” Girls want to work on projects that are meaningful, Douglas told attendees. Douglas and Mary shared three strategies to help educators better teach coding to girls: Redefine the traditional approach.

Girls get excited about coding when it solves a problem or serves a purpose, said Mary. Did you miss some of our SXSWedu coverage? Related Posts No Related Posts Found. Video: 'Girls Who Code' Talk About the Inspiration. Credit: Nadir Hashmi/NA.dir on Flickr, under Creative Commons. 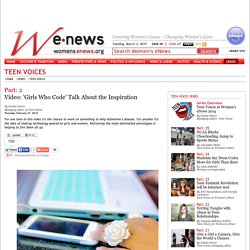 Lean In. To Get Women Into Computer Science, Sheryl Sandberg Launches Lean In Mentorship Network. Only 18% of computer science majors are women. 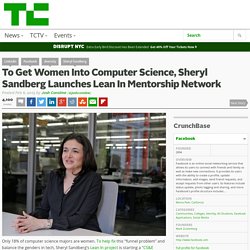 To help fix this “funnel problem” and balance the genders in tech, Sheryl Sandberg’s Lean In project is starting a “CS&E Chapter”. Potential and current women in computer science and engineering can join the chapter to connect with each other for advising and support. Time for IT jobs to be set aside for women. With women accounting for only a fraction of people studying computer science, there have been calls for gender-related quotas for IT roles. 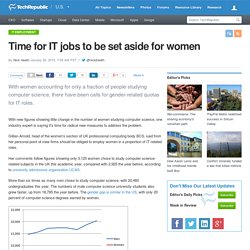 With new figures showing little change in the number of women studying computer science, one industry expert is saying it's time for radical new measures to address the problem. The top tech priority of 2015: Two X chromosomes. The US continues to fall behind in preparing the next generation of STEM innovators to build the future. 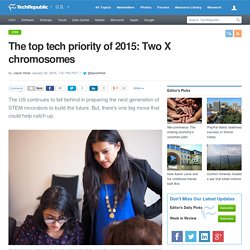 But, there's one big move that could help catch up. I work at the intersection of two industries -- technology and media -- that have some of the lowest representations of women. And, full disclosure, I'm a forty year old white dude. Google Invests $50 Million to Close the Tech Gender Gap.