The Catholic Church on Women 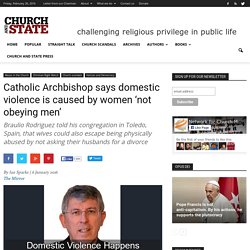 The Roman Catholic Archbishop of Toledo, Braulio Rodriguez, told his congregation that wives could avoid being hit by doing what they are told. Women could also escape being physically abused by not asking their husbands for a divorce , Rodriguez said. He told churchgoers in his sermon: “The majority of cases of domestic violence happen because the woman’s partner does not accept them, or rejects them for not accepting their demands. “Or often the macho reaction comes about because she asked for a separation.”

He also said many relationship problems occurred because the couple were not in a ‘true marriage’, and he criticised the practice of ‘quickie divorces’. He said: “I don’t think our political leaders are worried about divorce figures when they have fought so hard to implement the so-called quick divorce.” St. Vicious RCC Devised Claims For “Protecting” Women In Fact Mean Denying Basic Civil Rights. Donald A. 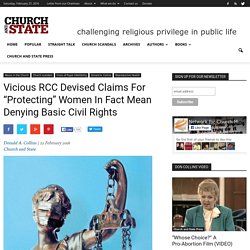 Collins | 22 February 2016Church and State One of many persons who commented was named “Connie” on the seminal piece in the February 21, 2016 NY Times Magazine article entitled “Do Women Need Legislative ‘Protection’” by Emily Bazelon. Connie emailed “We save the whales, seals, bees, butterflies, birds and just about any threatened or endangered plant and animal species compassionately” but she didn’t say women don’t need to be a protected species by withholding vital health services ala the Catholic Church’s antediluvian views on women’s reproductive rights. Of course it took clever thinking to come up with this “protection” angle—but after all Pope Francis is the first Jesuit pope and that branch is well known for its ability to try to make an illogical silk purse out of a sow’s ear.

However, Bazelon, whose arrival at the Times Magazine a year or so ago, has allowed her to write other ground breaking pieces. You can read the entire article here. Feminists objected. Gregory Paul.

The Catholic Church on Birth Control 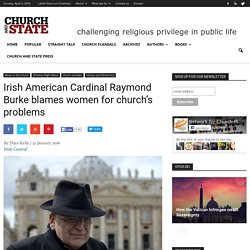 According to Cardinal Raymond Burke, since the 1960’s women have “feminized” the church and discouraged “manly” men from participating in clerical life. Burke, 66, the firebrand conservative who was recently demoted by Pope Francis to the ceremonial post as patron of the Order of Malta, pointed to the introduction of altar girls as an example. Serving mass is a “manly” job argues the Irish American Cardinal, and so the participation of women and girls in the daily life of the church has had a chilling effect that has led to a drop in morale and priestly vocations. “Young boys don’t want to do things with girls. “It requires a certain manly discipline to serve as an altar boy in service at the side of priest, and most priests have their first deep experiences of the liturgy as altar boys.”

The Catholic War on Women. By Gregory Paul | 25 February 2012OpEdNews It is literally true that the Catholic patriarchy is engaged in a global conspiracy to deny women their reproductive rights. 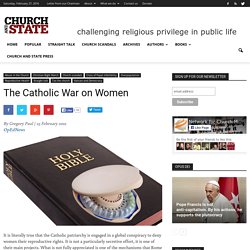 It is not a particularly secretive effort, it is one of their main projects. What is not fully appreciated is one of the mechanisms that Rome is using to work towards it’s goal as it claims victimhood due to denial of religious freedom when it comes to medical matters. Take over as much of the health care system here and abroad as possible. To be sure, the ultimate goal of the all-boy Catholic elite is to simply use big government to ban contraception and especially abortion via secular laws. The mechanism for keeping women in their place is simply to own or control as many medical establishments as possible. And the church’s insistence on denying women based on dubious religious grounds is causing problems for their health system. “Whose Choice?” The New Inquisition – the Roman Catholic Man Cult’s modern War on Women. By Gregory Paul | 20 December 2010RDFRS While working on a manuscript on the dark side of the Catholic patriarchy, which I hope will become a book, I realized that the modern anti-abortion campaign is the misogynist descendent of the Inquisitions that are supposed to have ended in the 1800s. 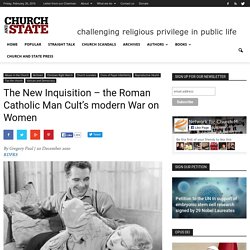 To understand why, we need to take a look back at when the Holy See operated a system that enforced a state of terror upon the good peoples of Europe. The below consists largely of extracts from the manuscript. Back when Europe was still under the sway of the Jesus cult a few hundred years ago, it was a sociological basket case. The Greco-Roman concepts of democracy were long forgotten as pagan deceits.