Kalki Koechlin - TBIP Tete-a-Tete. Kalki Koechlin: The Printing Machine. 'We Are the Future Cunt': CyberFeminism in the 90s. ​CyberFeminism \\ˈsī-bərˈfe-mə-ni-zəm \\ : A wave of thought, criticism, and art that emerged in the early 1990s, galvanizing a generation of feminists, before bursting along with the dot-com bubble. 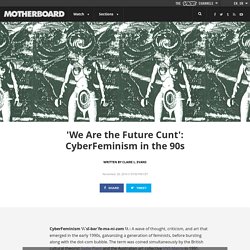 The term was coined simultaneously by the British cultural theorist ​Sadie Plant and the Australian art collective ​VNS Matrix in 1991, during the heady upwelling of cyberculture—that crucial moment in which the connective technology of the Internet was moving into the public sphere. CyberFeminism looked and sounded like this, basically: That’s the 1991 ​A Cyberfeminist Manifesto for the 21st Century, by VNS Matrix. Nobody knew how the clitoris really worked until four years ago. Warren Buffett is bullish ... on women - May. 2, 2013. Warren Buffett with the late Katharine Graham of the Washington Post at his 50th-birthday party in 1980 (Fortune) In the flood of words written recently about women and work, one related and hugely significant point seems to me to have been neglected. 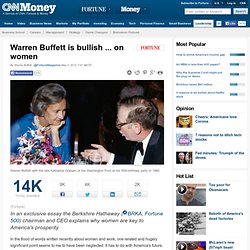 It has to do with America's future, about which -- here's a familiar opinion from me -- I'm an unqualified optimist. Now entertain another opinion of mine: Women are a major reason we will do so well. Start with the fact that our country's progress since 1776 has been mind-blowing, like nothing the world has ever seen. But that's not the half of it -- or, rather, it's just about the half of it.

Despite the inspiring "all men are created equal" assertion in the Declaration of Independence, male supremacy quickly became enshrined in the Constitution. Finally, 133 years later, in 1920, the U.S. softened its discrimination against women via the 19th Amendment, which gave them the right to vote. Bais Chana Women International, Extraordinary Jewish Learning. Don’t Just 'Lean In': 10 Ways Women Entrepreneurs and Leaders Should Take Action Now. Standing almost a foot taller than most boys throughout my adolescence had at least one clear benefit: I’ve always been a girl’s girl. 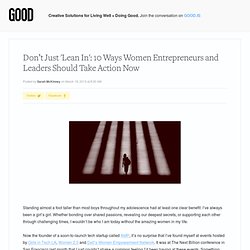 Whether bonding over shared passions, revealing our deepest secrets, or supporting each other through challenging times, I wouldn’t be who I am today without the amazing women in my life. Now the founder of a soon-to-launch tech startup called AMP, it’s no surprise that I’ve found myself at events hosted by Girls in Tech LA, Women 2.0 and Dell’s Women Empowerment Network. It was at The Next Billion conference in San Francisco last month that I just couldn’t shake a common feeling I’d been having at these events. Something was missing (besides men)—there was a palpable lack of guardedness or need to prove, creating space instead for genuine laughter, authentic displays of vulnerability, and wisdom-packed lessons learned.

Comment: Mother India has badly let down generations of its daughters. By Dr. 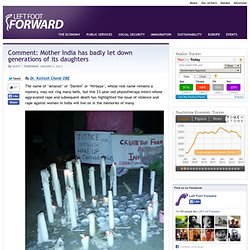 Kailash Chand OBE The name of ‘Amanat’ or ‘Damini’ or ‘Nirbaya’, whose real name remains a mystery, may not ring many bells, but this 23-year-old physiotherapy intern whose aggravated rape and subsequent death has highlighted the issue of violence and rape against women in India will live on in the memories of many. What was done to the girl was so brutal even the doctors had to control their tears when asked about her condition. Why was there such savagery in this rape case? While we await the post-mortem of the political fallout of the whole sad saga, what is very clear is women in India will no longer accept the current state of the law and its application, or lack of.

The death of Amanat now turns an already horrible crime into murder. How is it possible in a country which boasts to have so many women politicians at the local and national level that young, ordinary girls feel unsafe on the streets? Catalyst, Inc. (CatalystInc)

CATALYTIC WOMEN. Catalytic Women is a vibrant community of donors and social impact investors founded in San Francisco in 2011. 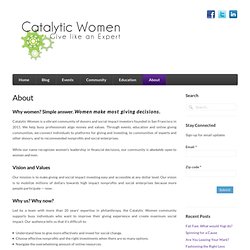 We help busy professionals align money and values. Through events, education and online giving communities, we connect individuals to platforms for giving and investing, to communities of experts and other donors, and to recommended nonprofits and social enterprises. While our name recognizes women’s leadership in financial decisions, our community is absolutely open to women and men. Vision and Values Our mission is to make giving and social impact investing easy and accessible at any dollar level. Why us? Led by a team with more than 20 years’ expertise in philanthropy, the Catalytic Women community supports busy individuals who want to improve their giving experience and create maximum social impact.

Catalytic Women offers an extensive network to foster connections among donors, families, communities and experts. Programs we offer to individuals and companies. Diane MacEachern: Women Leave Rio+20 Motivated to Galvanize Sustainability Around Family Planning and Reproductive Rights. There is a direct correlation between access to voluntary family planning, women's empowerment and environmental sustainability. 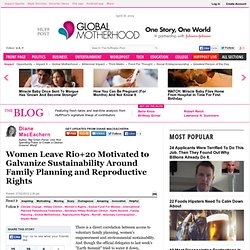 And though the official delegates to last week's "Earth Summit" tried to water it down, thousands of grassroots activists made it one of the biggest issues to rock Rio+20, as the event was also called. Why? Because ensuring that women have full reproductive rights creates one of the most desirable "two-fers" on the planet.

Complete access to voluntary family planning is among the quickest, simplest, and most affordable ways to improve women's quality of life. It is also one of the most direct, immediate and cost-effective ways to reduce climate change. Women took these issues to Rio because more than 200 million women in the U.S. and around the world cannot choose whether or when to have a baby, simply because they don't have access to voluntary family planning. This did not sit well with Hillary Rodham Clinton, the U.S. Dr. Www.goldmansachs.com/citizenship/10000women/news-and-events/international-womens-day/doc-icrw-10000-women-report.pdf. An Initiative to Provide Business & Management Education to Female Entrepreneurs in Emerging Markets. 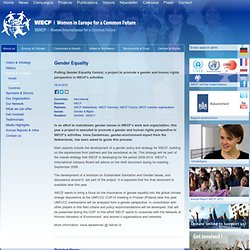 Irene Dankelman, gender-environment expert from the Netherlands, has been asked to guide this process. Main aspects include the development of a gender policy and strategy for WECF, building on the experiences from partners and the secretariat so far. This strategy will be part of the overall strategy that WECF is developing for the period 2009-2014. WECF’s International Advisory Board will advice on the draft document during its meeting, September 2008. Irdana - publisher of spiritual literature by women.