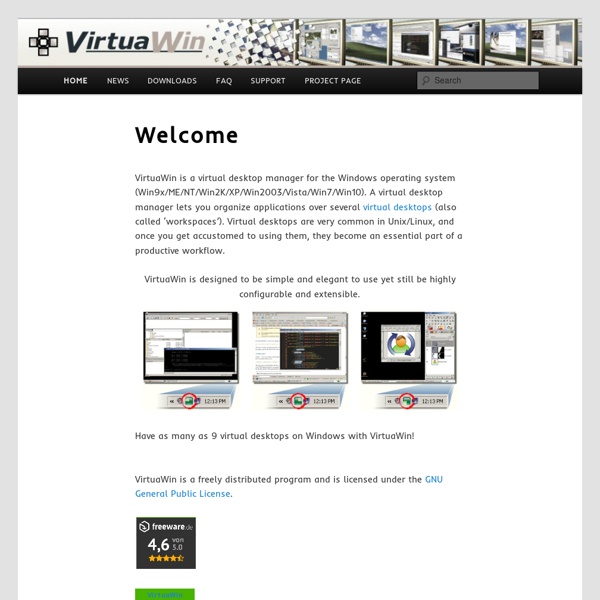 VirtuaWin Vs. Windows 10 Virtual Desktops VirtuaWin‘s virtual desktops has long provided the ability to expand your Windows work-space without adding extra physical screens. Now that Windows 10 includes its own virtual desktop/work-space feature I’ve found it both an improvement and a small step backwards. After a few months with both let’s break down how they compare. Here is a table documenting my findings as of January 2016. (Since Windows 10 and VirtuaWin may evolve in the future I’ll try to keep this up-to-date.) While VirtuaWin is more feature packed I personally don’t miss most of the capabilities absent in Windows 10’s desktops.

The Bourne Trilogy (DVDrip) excellent quality! The Bourne Trilogy (DVDrip) excellent quality! Type: Video > Movies Files: Size: 2.06 GiB (2209208320 Bytes) How To Use Four Desktops At Once & Boost Productivity [Windows] While it’s nice that you can ALT-tab your way through as many open applications as you like, it would still be nice to have areas of the desktop set aside for specific display tasks – like the clock, weather, mail and so on. Well, there is a power tool from Windows SysInternals called Desktops, which lets you create three additional “virtual desktops” where you can spread out your applications as much as you like. You no longer have to pile one application on top of the other in one screen – with Desktops, you can just flow through your four desktops as if you have four computers running at once. Once you download and set up the app, the first thing it’ll ask you to do is to configure the hotkey sequence you’ll use to switch between your four desktops.

How To Get The Best Features Of Mac, Linux & Co On Windows Do you suffer from operating system envy? I know I do. While I’m mainly a Windows user, I can appreciate a lot of the features available on Mac and Linux. How to Create and Manage Virtual Desktops in Windows 10 This article explains how to create and mange Virtual Desktops in Windows 10. As we know, Microsoft announced the launching date of Windows 10. The launching date of Windows 10 is 29th July 2015.

WinFF 1.3.1 Apropos my earlier post... About 10 minutes after making a generally complimentary post, I discovered that the one criticism I had of this product was in error. I tried to post a correction, unfortunately, this website would not allow me to post the correction for 24 hours. So here it is, along with some more details on editing presets: In fact WinFF provides the ability to fine-tune the conversion profiles and save different variations of the defaults under custom names (very helpful). However, that feature is separate from the 'Additional Options' tabbed dialog, which at first glance appears to be the place to go in order to fine-tune the conversion presets.

Corporation Celebrate the savings on your favorite Stardock titles in the Steam Holiday Sale! Games are up to 75% off* - don't miss out! Read Full Article Plymouth, MI. – December 15, 2016 - Stardock and Mohawk Games have released an update for Offworld Trading Company that fully integrates the game with Steam Workshop. Players who would like to mod the game will now be able to mod xml data for buildi [advanced] Using raw COM interfaces in AHK - Tutorials - AutoHotkey Community IntroductionCOM is a very powerful way to automate things on your computer. This tutorial will show you a way to use the very powerful COM technology even in situations whre it seems impossible at first sight. You may know the COM.ahk library by Sean or have used COM to automate IE, Word, Excel etc. But this is only a very small subset of COM. If you look around msdn, you will find plenty COM interfaces.