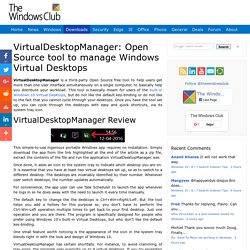 This tool is basically meant for users of the built-in Windows 10 Virtual Desktops, but do not like the default key-binding or do not like to the fact that you cannot cycle through your desktops. Once you have the tool set up, you can cycle through the desktops with easy and quick shortcuts, via its system tray icon. This simple-to-use ingenious portable Windows app requires no installation. Simply download the app from the link highlighted at the end of the article as a zip file, extract the contents of the file and run the application VirtualDesktopManager. exe. Once done, it adds an icon to the system tray to indicate which desktop you are on.

For convenience, the app user can use Task Scheduler to launch the app whenever he logs in so he does away with the need to launch it every time manually. How to Add an Indicator to See What Virtual Desktop You’re On in Windows 10. The ability to have multiple desktops was missing for a long time in Windows, until Windows 10 finally added it. 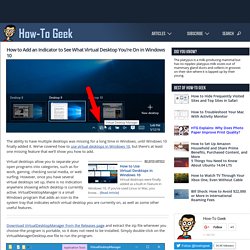 We’ve covered how to use virtual desktops in Windows 10, but there’s at least one missing feature that we’ll show you how to add. Virtual desktops allow you to separate your open programs into categories, such as for work, gaming, checking social media, or web surfing. However, once you have several virtual desktops set up, there is no indication anywhere showing which desktop is currently active. VirtualDesktopManager is a small Windows program that adds an icon to the system tray that indicates which virtual desktop you are currently on, as well as some other useful features.

Download VirtualDesktopManager from the Releases page and extract the zip file wherever you choose–the program is portable, so it does not need to be installed. The default hotkeys for switching desktops in Microsoft’s Virtual Desktops are Ctrl+Win+Left and Ctrl+Win+Right. An AutoHotkey Rainmeter/desktop toggler. : Rainmeter. Hyperlink. RainMeter. Good Scripts, AHK.

VirtualDesktop/VirtualDesktopInteropHelper.cs at master · Grabacr07/VirtualDesktop. GitHub - Grabacr07/SylphyHorn: Virtual Desktop tools for Windows 10. CubeDesktop NXT Download. A practical and effective application that helps you create various virtual and independent desktops, increasing the space you have to work and play with Working with multiple desktops you can increase productivity and efficiency by managing your folders in a better and intuitive way. 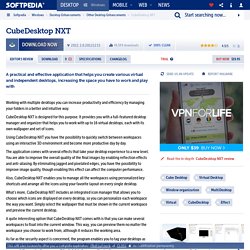 CubeDesktop NXT is designed for this purpose. It provides you with a full-featured desktop manager and organizer that helps you to work with up to 16 virtual desktops, each with its own wallpaper and set of icons. Using CubeDesktop NXT you have the possibility to quickly switch between workspaces using an interactive 3D environment and become more productive day by day. The application comes with several effects that take your desktop experience to a new level.

Also, CubeDesktop NXT enables you to manage all the workspaces using personalized key shortcuts and arrange all the icons using your favorite layout on every single desktop. Virtual Desktop Assist Download. A virtual desktop manager for creating virtual desktop The number of users who need to work on multiple desktops at the same time has grown significantly lately, so every single app that's able to create and manage virtual desktops quickly gains attention and appreciation. 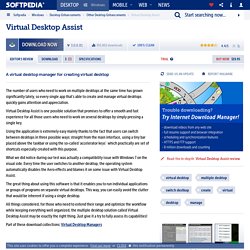 Virtual Desktop Assist is one possible solution that promises to offer a smooth and fast experience for all those users who need to work on several desktops by simply pressing a single key. Using the application is extremely easy mainly thanks to the fact that users can switch between desktops in three possible ways: straight from the main interface, using a tiny bar placed above the taskbar or using the so-called 'accelerator keys' which practically are set of shortcuts especially created with this purpose. What we did notice during our test was actually a compatibility issue with Windows 7 on the visual side. Actual Virtual Desktops: Multiple Monitors Compatibility - Independent Virtual Desktops on each Monitor. Requesting API calls for Windows 10's virtual desktops. MultiTabber - Home. Virtual Desktop - Home. How to Create and Manage Virtual Desktops in Windows 10. This article explains how to create and mange Virtual Desktops in Windows 10. 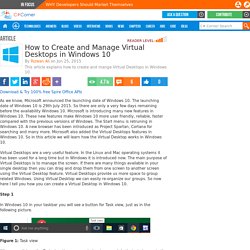 Figure 1: Task view When you click on the Task view then a new window is opened. VirtuaWin Vs. Windows 10 Virtual Desktops. VirtuaWin‘s virtual desktops has long provided the ability to expand your Windows work-space without adding extra physical screens. 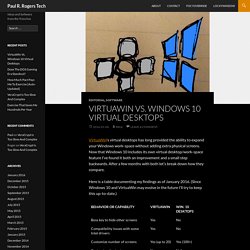 Now that Windows 10 includes its own virtual desktop/work-space feature I’ve found it both an improvement and a small step backwards. After a few months with both let’s break down how they compare. Here is a table documenting my findings as of January 2016. Virtual Desktops for the Windows Operating System. Virtual Desktop on WIndows 10 - Software Recommendations Stack Exchange. Current community your communities Sign up or log in to customize your list. more stack exchange communities company blog Stack Exchange Inbox Reputation and Badges. 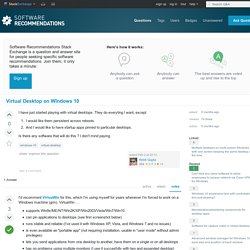 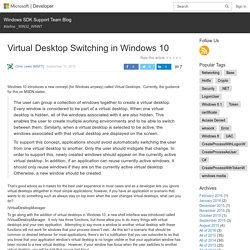 Currently, the guidance for this on MSDN states: The user can group a collection of windows together to create a virtual desktop. Every window is considered to be part of a virtual desktop. When one virtual desktop is hidden, all of the windows associated with it are also hidden. This enables the user to create multiple working environments and to be able to switch between them. That’s good advice as it makes for the best user experience in most cases and as a developer lets you ignore virtual desktops altogether in most simple applications; however, if you have an application or scenario that wants to do something such as always stay on top even when the user changes virtual desktops, what can you do? 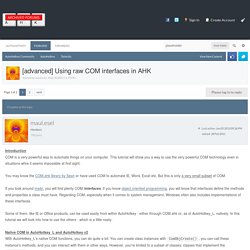 This tutorial will show you a way to use the very powerful COM technology even in situations whre it seems impossible at first sight. You may know the COM.ahk library by Sean or have used COM to automate IE, Word, Excel etc. But this is only a very small subset of COM. If you look around msdn, you will find plenty COM interfaces. If you know object oriented programming, you will know that interfaces define the methods and properties a class must have. Some of them, like IE or Office products, can be used easily from within AutoHotkey - either through COM.ahk or, as of AutoHotkey_L, natively. Native COM in AutoHotkey_L and AutoHotkey v2With AutoHotkey_L's native COM functions, you can do quite a lot: You can create class instances with ComObjCreate(), you can call these instance's methods, and you can interact with them in other ways.

As first step, we search the interface on msdn. Ptr := ComObjCreate(CLSID, IID) GitHub - nullpo-head/Windows-10-Virtual-Desktop-Switching-Shortcut: A tool to make up for the lack of "Switch to Nth Virtual Desktop" shortcut in windows 10. Follow. ATTENTION INFO.