Marios Kokkodis. Will the On-Demand Economy Raise Global Living Standards?  The global workforce has begun a significant transition away from full-time salaried jobs and towards a variety of flexible forms of employment, independent businesses of one, freelance work, and other forms of on-demand labour. 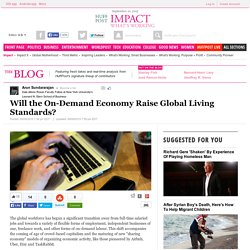 Labor looks different in the 21st century–so should job training.

Slack Just Made It Easier To Unify Your Online Work Life. Slack wants to weave itself into the rest of your digital work tools. 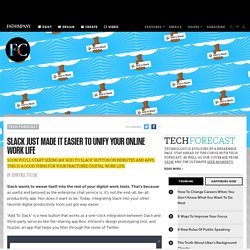 That's because as useful and beloved as the enterprise chat service is, it's not the end-all, be-all productivity app. Nor does it want to be. Today, integrating Slack into your other favorite digital productivity tools just got way easier. "Add To Slack" is a new button that works as a one-click integration between Slack and third-party services like file-sharing app Box, InVision's design prototyping tool, and Nuzzel, an app that helps you filter through the noise of Twitter.

Crowdwork. Virtual worlds. Gaming. Facts and Statistics about Virtual Work. Working from home is a growing trend for both employees and employers. 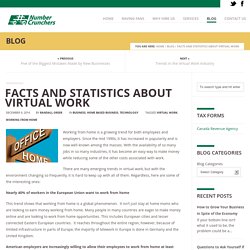 Since the mid 1990s, it has increased in popularity and is now well known among the masses. With the availability of so many jobs in so many industries, it has become an easy way to make money while reducing some of the other costs associated with work. There are many emerging trends in virtual work, but with the environment changing so frequently, it is hard to keep up with all of them. Regardless, here are some of the interesting ones: Nearly 40% of workers in the European Union want to work from home This trend shows that working from home is a global phenomenon.

American employers are increasingly willing to allow their employees to work from home at least once a month If you are already employed, working from home for your current employer may be an option. Online jobs in social networking and online content are increasing. The Internet is already a great medium to make money, but now it is increasingly so. MP_%20World%20of%20Virtual%20Work%20Facts_Stats_FINAL.pdf. Connecting talent with opportunity in the digital age.

Labor markets around the world haven’t kept pace with rapid shifts in the global economy, and their inefficiencies have taken a heavy toll. 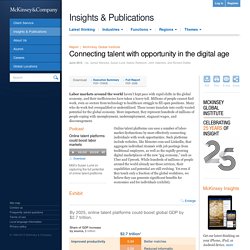 Millions of people cannot find work, even as sectors from technology to healthcare struggle to fill open positions. Many who do work feel overqualified or underutilized. These issues translate into costly wasted potential for the global economy. Online Labor. Welcome to Forbes. InfodevDocuments_1056. Welcome to Forbes. A Taxonomy of Virtual Work by Miriam A. Cherry. Saint Louis University - School of LawJuly 26, 2010 Georgia Law Review, Forthcoming Abstract: Millions of people worldwide entertain themselves or supplement their incomes – or both – by meeting with fellow employees as avatars in virtual worlds such as Second Life, solving complicated problems on websites like Innocentive, or casually “clicking” to make money for simple tasks on Amazon.com’s Mechanical Turk. 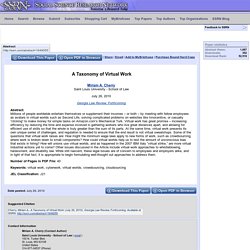 Virtual work has great promise – increasing efficiency by reducing the time and expense involved in gathering workers who live great distances apart, and allowing for efficient use of skills so that the whole is truly greater than the sum of its parts. At the same time, virtual work presents its own unique series of challenges, and regulation is needed to ensure that the end result is not virtual sweatshops. 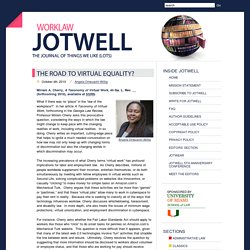 Cherry, A Taxonomy of Virtual Work, 44 Ga. L. Rev. __ (forthcoming 2010), available at SSRN. What if there was no “place” in the “law of the workplace?” In her article A Taxonomy of Virtual Work, forthcoming in the Georgia Law Review, Professor Miriam Cherry asks this provocative question, considering the ways in which the law might change to keep pace with the changing realities of work, including virtual realities. The increasing prevalence of what Cherry terms “virtual work” has profound implications for labor and employment law. For instance, Cherry asks whether the Fair Labor Standards Act should apply to workers like those who “click” to do small tasks for pennies on Amazon.com’s Mechanical Turk website.

Trends - Employment Reports. Empl20141120_new-forms-employment-study_en.pdf. COST-Action-IS1202-Working-Paper-12.pdf. The Third Wave of Virtual Work. Artwork: Jules de Balincourt, Big Globe Painting, 2012, oil and acrylic on panel, 90″ x 96″ If you wanted to find three decades of the evolution of knowledge work encapsulated in a single career, Heidi McCulloch’s would be a good one to consider. 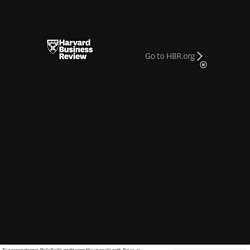 As a liberal arts graduate, McCulloch started out working in corporate marketing departments and then moved to an advertising agency, becoming an outside service provider to companies like the ones where she’d previously worked. After starting her family, she stepped away from that world and took on an entrepreneurial challenge: restoring and selling a historic inn. She came back to agency work a few years later and rose to vice president by playing specialized roles on global project teams.

And now? To a career planner, McCulloch’s might seem like an erratic path. Experts project that within a few years, more than 1.3 billion people will work virtually. Mobile Virtual Work - A New Paradigm? Dear Reader This is a book about mobile virtual work. 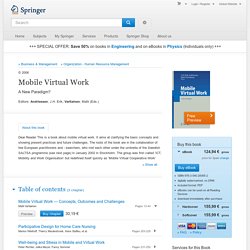 It aims at clarifying the basic concepts and showing present practices and future challenges. The roots of the book are in the collaboration of few European practitioners and - searchers, who met each other under the umbrella of the Swedish SALTSA programme (see next page) in January 2002 in Stockholm. Technology at Work. Makeshift Society - Welcome. Freelancers Union Retirement Plan. Retirement planning: the basics How much annual income will you need during your retirement years to support the lifestyle you want? 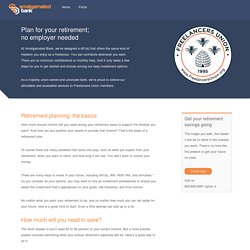 And how can you position your assets to provide that income? That’s the basis of a retirement plan. Of course there are many variables that come into play, such as what you expect from your retirement, when you want to retire, and how long it will last. You don’t want to outlive your money. Our National Expansion. When I founded the union nearly 20 years ago, we were trying to make sense of this new type of worker -- and bring them together to solve their problems. 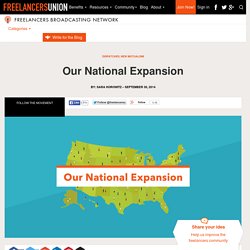 In 2001, we began connecting members with the quality, affordable health insurance they needed -- eventually launching our own social-purpose insurance company covering 25,000 New Yorkers. Today, I’m proud to announce what’s next. We are embarking on an ambitious national expansion -- bringing the sustainable, social-purpose model we’ve built in New York to all of the nation’s 53 million freelancers. Freelancers Union going to scale will mean new ways for independent workers nationally to buy benefits, access health care, get work, and connect to each other. Instead of millions of individuals on their own, we’re weaving our members together in a true freelancer network and creating a new mutualist marketplace. And that’s our key difference. That’s where Freelancers Medical comes in.

Our centers are true community spaces. IRS Says Virtual Greeters Are Real Employees. By Alphaville Herald on 12/05/08 at 9:42 am Electric Sheep Company VP Giff Constable confirms IRS ruling by Pixeleen Mistral, National Affairs desk Misty and Maia are employees – not contractors This weekend, the Second Life Herald learned that the Internal Revenue Serivce has ruled the greeters employed by the Electric Sheep Company for the CSI:NY metaverse/television cross promotional event are ESC employees rather than contractors. The ruling is significant – it suggests a number of Second Life players-turned workers had their employment status misclassified over the last 6 months. The CSI:NY hypervent was met with mixed success, but continues on a reduced scale providing work for a number of metaverse residents.

IBM virtual strike. Winifred Poster: Digital Labor Conference. Winifred Poster is a sociologist teaching at Washington University, St. Louis. Her interests are in feminist labor theory, digital globalization, and Indian outsourcing. IS UNIT WEB SITE - IPTS - JRC - EC. In the context of the European Employment strategy, the Agenda for New Skills and Jobs, the Grand Coalition for ICT Jobs, and specifically in its 2012 EMPLOYMENT PACK, the JRC-IPTS is conducting research to inform policy makers on some of the new forms of work and pathways to employability mediated by the internet. This research focuses on internet-mediated work activity: crowd-sourced labour, crowd funding, online volunteering and reciprocal work exchange (time banks). These have been developed over the last 10 years and are now growing in importance. BriefingonICT4EMPLworkshop11Junev07.pdf. TimebankingacrossEurope.pdf. VolunteeringCravenspresentation_may31.pdf.

Journal of Evolution and Technology. Association of Professional Futurists - Profutures News. While researching his next book in values changes, APF co-founder Andy Hines mined the APF listserv for texts spanning the turbulent 1960s to 1980s era that identified major future transformations. Colleagues responded with a rich set of notable writings from all STEEP categories (social, technological, environmental, economic, and political), recapped in a blog post "Looking Back on the Coming Values Transformation. " According to Andy, "In retrospect, a lot of what was forecast has happened, just that it's been so gradual as not to be noticed.

" Still others may be new to you, for instance, Robert Theobald's The Challenge of Abundance (1962) or Roszak's The Making of a Counter Culture (1968). In particular, since it influenced my mallable teenage mind, I was delighted to see Zen and the Art of Motorcycle Maintenance (1974) by Robert Pirsig recognized as signaling the coming convergence of east and west philosophies.

It remains a valued text within arm's length even now. Women in Technology. Do you feel that sites like Elance provide more work opportunity for women vs. traditional employment to grow their careers? Is Virtual Work the Key to the Future of Women in Technology? The lack of women entrepreneurs in the tech industry, and the shortage of female tech employees, have been topics of much discussion.

The Future of Work & Collaboration. According to Cisco’s Connected World Technology Report, the future of work will be more flexible and collaborative than ever before. In this two-part blog series, Rowan Trollope, Senior Vice President and General Manager of Cisco’s Collaboration Technology Group, explores how the IT and business landscape is changing based on this new research and how organizations can prepare. Information on all forms of virtual work.