How to Brew Coffee in an Ibrik: A Modern Take. [Zoltán Kis competing in the 2012 World Ibrik/Cezve Championship] Last week we covered a traditional method of brewing Turkish coffee in an ibrik, a small pot designed for stovetop preparation of coffee. 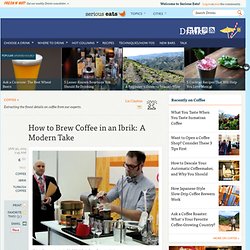 Though the techniques used to make the classically sludgy, intense coffee are hundreds of years old, it's no surprise that modern coffee lovers couldn't leave well enough alone. To this end, the World Ibrik/Cezve Championship was born, a battle of skills and innovation using these small metal pots, with results that traditionalists are likely to scoff at. Seeing as the brewer is used differently throughout the (primarily Eastern European) countries in which it is popular, we saw no reason to discount even more adventurous twists on the ibrik. We spoke to the reigning World Ibrik Champion, Zoltán Kis of Hungary—and seeing as future World Ibrik Championships are currently on hold, he may reign for considerable time—about his prize-winning method, and philosophy.

34. THE EVOLUTION OF COFFEE APPARATUS. Chemex® Coffeemakers & Filters. The Chemex® coffeemaker was invented by Peter J. 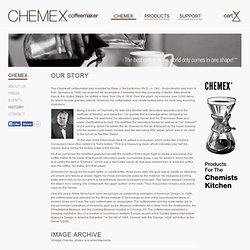 Schlumbohm, Ph.D., in 1941. Schlumbohm was born in Kiel, Germany in 1896. He received his doctorate in Chemistry from the University of Berlin. After several trips to the United States, he settled in New York City in 1936. Over the years, he invented over 3,000 items for which he was granted patents. Being a doctor of Chemistry, he was very familiar with laboratory apparatus and the methods of filtration and extraction.

To the wall of the Erlenmeyer flask he added a protrusion, which looks like a bubble. He then combined the modified glass funnel with the modified Erlenmeyer flask to create a one-piece drip coffee maker to be made of heat proof, laboratory grade, borosilicate glass. Vacuum Coffee Pots:  History. The history of coffee brewers. Right from the beginning, coffee pots were made for coffee. 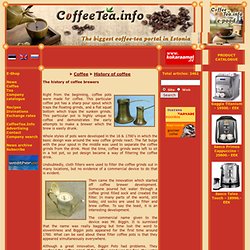 This particular coffee pot has a sharp pour spout which traps the floating grinds, and a flat squat bottom which traps the sunken grinds. This particular pot is highly unique to coffee and demonstrates the early attempts to make a brewer which the brew is easily drunk. Whole styles of pots were developed in the 16 & 1700's in which the basic design was around the way coffee grinds react. The fat bulge with the pour spout in the middle was used to separate the coffee grinds from the drink. Электрическая капельная кофеварка, 1.2 л. b. over Черный. Kahva Coffee Maker by Lina Fischer. Coffee making magic I remember hearing as a child a quote that is most often attributed to Sir Isaac Newton; “what goes up. must come down…” Newton may not have said those very words, but his simple premise should be enough to debunk the black magic involved with this gravity defying coffee maker by Lina Fischer. 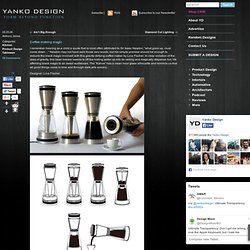 In clear violation of the laws of gravity, this bean brewer seems to lift the boiling water up into its ceiling and magically dispense hot, life affirming black magic to an awed audiences. The “Kahva” has a clean hour glass silhouette and reminds us that all good things come in time and through dark-arts sorcery… Designer: Lina Fischer How to use it: 1. How to Use a Pour Over Brewer. Hario V60 Coffee Dripper - Dave Borton's Review. First impressions: Solid. 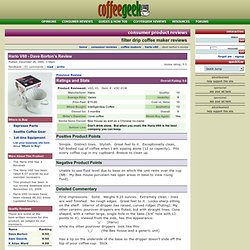 Weighs 9.25 ounces. Extremely clean - lines are well finished. No rough edges. Great feel to it. The Hario V60 Coffee Machine. Discovered in the depths of Instagram comes this question generating photo of a prototype for what appears to be a programmable, fully automatic water dispersing device for a Hario V60 setup—the V60 Coffee Maker. 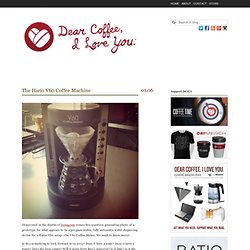 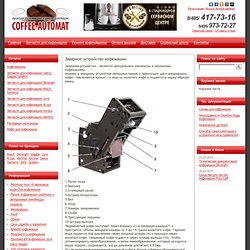 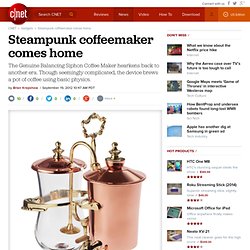 Do an eBay search for vintage or retro and that becomes all too clear. Another label that gets applied all over the place is steampunk. Sometimes one can even see it applied to things that plug into the wall. For those who fancy technology from the Victorian or Edwardian eras, that is probably not what they have in mind. Beautiful Wood and Steel Steampunk Coffee Maker. Cafetière (or, as you might say, French Press) meets Victorian deep-sea diver’s helmet in the Freud coffee plunger. 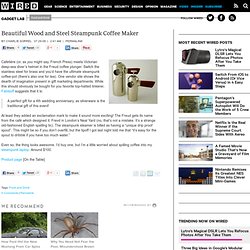 Switch the stainless steel for brass and you’d have the ultimate steampunk coffee-pot (there’s also one for tea). One vendor site shows the dearth of imagination present in gift marketing departments. While this should obviously be bought for you favorite top-hatted tinkerer, Fabstuff suggests that it is: A perfect gift for a 4th wedding anniversary, as silverware is the traditional gift of this event! At least they added an exclamation mark to make it sound more exciting! 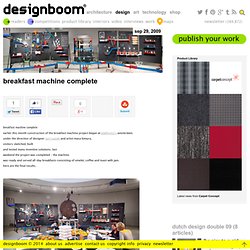 By employing some laws of physics—such as the ‘Venturi Effect’ and thermodynamics—the device would punch the espresso capsule placed within the barrel, when the temperature and pressure is right to give you the perfect shot. Ex-NASA and Apple engineer makes $11,111 Blossom One Coffee Maker decked in mahogany and teak. With a belief that it takes science, engineering, and art to brew a cup of insanely great coffee, a group of master engineers who previously worked at NASA and Apple, has now crafted what is called as the finest coffee brewing machine ever made.

Dubbed as Blossom One Limited, this $11,111 production coffee maker that empowers you with unprecedented control over coffee brewing was manufactured by company Blossom Coffee, a brainchild of MIT engineering graduate and coffee fanatic Jeremy Kuempel, and two other colleagues. Especially designed to deliver coffee like never before, the Blossom One which operates almost silently and boasts Wi-Fi connectivity and camera, takes its elegant design inspiration from sports cars, premium furniture, and the Bauhaus movement. It’s a coffee maker crafted to change the perception of coffee-making, right from bean to cup. Actually, Jeremy Kuempel added camera to the machine in order to scan Quick Response (QR) codes. Il Tiro - One Shot of Espresso by Stefan Riegebauer, Christina Carli, Florian Kainz & Niko Schwarz. One Shot Espresso Gun. How to Brew Ice Drip Coffee.