PERK: Finally, a Fully Automated Pourover Coffee Machine by PERK. With PERK's full automation, it is simple to get into Third Wave coffee. 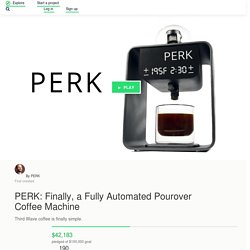 You get perfectly extracted coffee at the push of a button; no more compromises, no more fiddling with cones and kettles, and no more discussions about theory. The “first wave” for coffee began in the early 1900’s when roasters provided convenience by packaging coffee to be affordable and ready to brew. In the 1960’s, with the growth of coffee shops such Starbuck and Peet’s, the “second wave” ushered in a movement focused on consistently drinkable coffee along with a social experience. The latest era, the “Third Wave,” began in the early 2000s and focuses on delivering coffee so bright, sweet and fruity that it no longer needs cream or sugar.

Yes, You Can Make Real Cuban-Style Coffee At Home. How to Brew Pour-Over Coffee. This is a condensed version of an article that originally appeared on Gear Patrol in January of 2016. 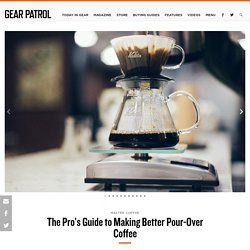 How to Make Pour-Over Coffee. Pour-over coffee isn’t just a convenient way to brew a single cup of coffee at a time; it also calls for a radically simple technique. 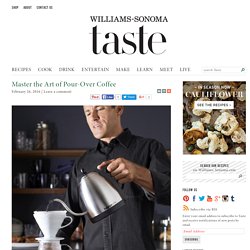 Just-boiled flows over ground beans, extracting essential oils as brewed coffee drips through the cone filter and into your server or mug. Cleaning up is a cinch: simply toss the used filter into the compost and rinse out the cone. The secret to pour-over done right is slow, careful pouring, precise measurement of your coffee and your water, and the correct water temperature. 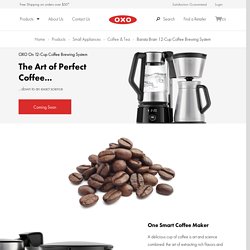 In addition to brewing perfect coffee, you can also use the Brewing System to heat water for tea or other hot beverages. The removable glass kettle is made of durable, BPA-free borosolicate glass, which provides thermal shock protection and a pure, clean taste. The Brewing System is designed to boil water in the kettle before brewing coffee, and its intelligent scale measures the exact amount of water needed per cup of coffee; this means you can add extra water to the kettle to have boiling water left after your coffee brews for tea, hot chocolate, oatmeal and more. You can also use the System to boil up to 12 cups of hot water without brewing any coffee. Epicurious Is Unnecessarily Snobbish About Homemade Espresso — Strong Opinions. Does home espresso invariably suck? 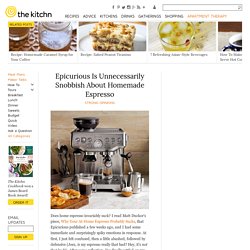 I read Matt Duckor's piece, Why Your At-Home Espresso Probably Sucks, that Epicurious published a few weeks ago, and I had some immediate and surprisingly spiky emotions in response. At first, I just felt confused, then a little abashed, followed by defensive (Jeez, is my espresso really that bad? Hey, it's not that bad!). After some reflection, I've finally settled on my final takeaway: I don't care what Epicurious or Matt Duckor thinks. But I do care what you think. Matt Duckor dismisses the pod-based espresso machines and waves aside the slightly more advanced steam-powered espresso makers, saying that the only way we can hope to make semi-decent espresso at home is if we go at it with single-minded devotion and a willingness to lay down enormous amounts of cash for a "real" espresso machine.

Poppy - Pour-Over. If You Drink Coffee, Here's A Fact You Need To Wake Up To. How to make Vietnamese coffee - Ca phe sua da. Coffee Science: How to Make the Best French Press Coffee at Home. Make better coffee at home in your French press. 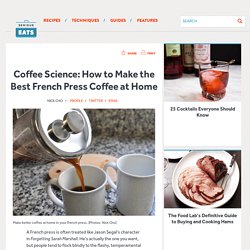 [Photos: Nick Cho] A French press is often treated like Jason Segal's character in Forgetting Sarah Marshall. Julian Baggini – The art of coffee. You’ve just had dinner at one of the best restaurants in the country, the kind of place where the chef talks about his passion for perfection, obsession with detail and demand for the best, freshest ingredients. 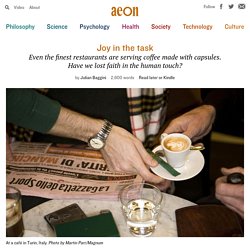 You know that there is probably one cook in the kitchen for every couple in the dining room. So you might feel surprised — even cheated — to discover that the coffee you are now enjoying was made by the waiter popping a capsule into a machine and pressing a button. This is not a fanciful scenario. In the UK, more than 15 Michelin-starred restaurants use Nespresso, the market-leading capsule system, to make their coffee — including Heston Blumenthal’s Fat Duck in Berkshire, and The Ledbury in London. In France, Nespresso supplies more than 100 Michelin restaurants, including the legendary L’Arpège in Paris. You might not care much about fine dining or coffee. With the benefit of hindsight, it now seems obvious that chess is just the kind of thing that computers could do well. Best. Coffee Packaging. Ever. We don’t just love coffee, we need coffee. 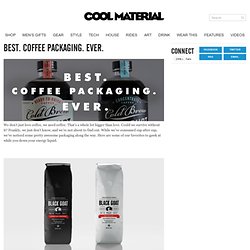 That’s a whole lot bigger than love. Could we survive without it? The secret to making great coffee revealed. Photo by Juliana Jiménez Jaramillo for Slate. 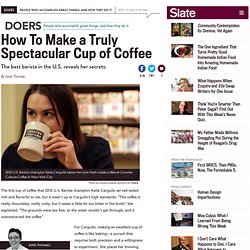 The first cup of coffee that 2012 U.S. Barista champion Katie Carguilo served tasted rich and flavorful to me, but it wasn’t up to Carguilo’s high standards. “This coffee is really chocolatey, really nutty, but it tastes a little bit too bitter in the finish,” she explained. “The grounds were too fine, so the water couldn’t get through, and it overextracted the coffee.” June Thomas is a Slate culture critic and editor of Outward, Slate’s LGBTQ section. Follow. Dymaxion. - Why you should stop cold-brewing, and use the Japanese Iced Coffee Method. How To Make an Awesome Cup of Coffee. How to Make Cold-Brewed Coffee. Inspired by conversations on the Food52 Hotline, we're sharing tips and tricks that make navigating of our kitchens easier and more fun. 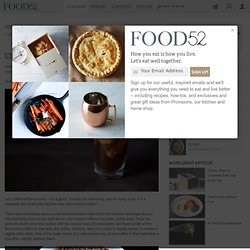 Today: What's the big fuss about cold brew? Let us explain. Iced coffee in the summer -- it's a given. World’s first roast-grind-brew coffee machine by Bonaverde Coffee Changers. Our idea Our roast-grind-brew coffee machine enables you to roast green beans on their own and therefore enables farmers to directly sell their green, raw coffee beans to you. Farmers become faces and you become a coffee changer. Help us show the world that it is time to change the way coffee is perceived, traded and enjoyed. For the first time ever, astronauts will be able to drink “good, hot and steaming” coffee in space. Last year Italian astronaut, Luca Partmitano, took questions from Astronaut Abby about his stint on the International Space Station. When asked what food he wished were available on the ISS, Partmitano responded: “The only thing I really miss, if we talk about food, is a real Italian espresso.”

In November, the treat of hot espresso will be available for astronauts on the International Space Station. According to CollectSPACE: “The ‘ISSpresso,’ a capsule-based espresso machine, will enable astronauts to brew the hot caffeinated beverage as an alternative to the instant coffee that has been their only option aboard the space station for the past 13 years.” The Italian coffee company, Lavazza, worked with aerospace engineering firm Argotec and the Italian Space Agency to create what is being called ISSpresso. “We have been thinking about taking espresso into space for some time,”Giuseppe Lavazza, vice president of Lavazza, said in a statement. Coffee-brewing alarm clock starts your day with a fresh mug. The Barisieur has a fresh cup of coffee ready and waiting for when you wake up Image Gallery (21 images) If not ourselves, we all know someone that claims to be useless until they've had that first mouthful of coffee in the morning.

The Barisiuer is an elegantly designed alarm clock that starts your day with a freshly-brewed cup of joe before you even get out of bed. View all. 10 Best Espresso Machines & Buying Guide. With a new year comes new options. We’ve updated our list of the best espresso machines with several new options and updated prices on older offerings that are now an even better deal than before. spresso is so the new moonshine. But these latter-day at-home concoctions don’t run through slipshod copper stills or spend time fermenting in claw-foot tubs. Instead, amateurs and connoisseurs across the globe utilize beautiful, complicated and completely legal kitchen countertop machinery to whip up and drip out high-grade buzz that people pay good money to sip.

Novices looking to break into the shot-pulling biz, though, will find that buying the proper equipment is an intimidating affair, complicated by ever-escalating price tags and more mechanical nerdery than a bus full of mathletes with erector sets. Categories Pick Your Poison Manual. 10 Best Espresso Machines & Buying Guide.