Brain Training Future Swarm Robot Armies. The 1984 movie The Last Starfighter tells the story of a teenager whose calling in life seems to be nothing more than to play arcade games. 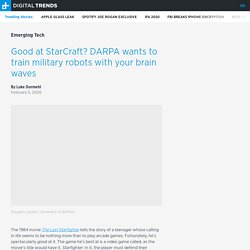 Pentagon Report Predicts Rise of Machine-Enhanced Super Soldiers. By 2050, the U.S. military could have the ability to implant sophisticated machine technology into combat troops for enhanced performance capabilities such as super eyesight and advanced brain function for controlling unmanned drones and other weapons systems, according to a recent Defense Department study. 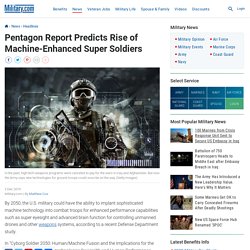 In "Cyborg Soldier 2050: Human/Machine Fusion and the Implications for the Future of the DOD," the Biotechnologies for Health and Human Performance Council study group surveyed several current and emerging technologies designed to augment human performance to present the feasibility, military uses, and ethical, legal, and social implications of the technology. "The [study group] predicted that human/machine enhancement technologies will become widely available before the year 2050 and will steadily mature, largely driven by civilian demand and a robust bio-economy that is at its earliest stages of development in today's global market," the report states. A.I. Downs Expert Human Fighter Pilot In Dogfights. 12 Futuristic Forms of Government That Could One Day Rule the World. Soldier Andrew Garthwaite's mind-control bionic op. 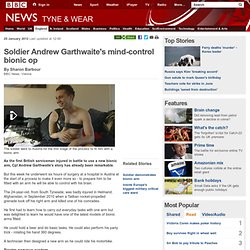 Soldier Andrew Garthwaite's mind-control bionic op. The 10 Most Important Theories About Why We Make War. How Covert Agents Infiltrate the Internet to Manipulate, Deceive, and Destroy Reputations. One of the many pressing stories that remains to be told from the Snowden archive is how western intelligence agencies are attempting to manipulate and control online discourse with extreme tactics of deception and reputation-destruction. It’s time to tell a chunk of that story, complete with the relevant documents. Over the last several weeks, I worked with NBC News to publish a series of articles about “dirty trick” tactics used by GCHQ’s previously secret unit, JTRIG (Joint Threat Research Intelligence Group). These were based on four classified GCHQ documents presented to the NSA and the other three partners in the English-speaking “Five Eyes” alliance.

Neuro-enhancement in the military: far-fetched or an inevitable future? About five years ago, not long after I started up my research group at Cardiff University, something rather strange happened. 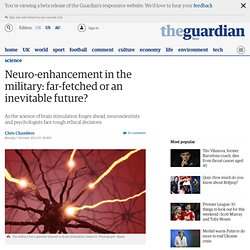 One morning I came down to my lab to find the door wide open and a suited man standing in the middle of the room, peering around and scribbling on a clipboard. He told me he worked for a private defence firm who were interested in applications of my research on human brain stimulation. 43 Books About War Every Man Should Read. Editor’s Note: This is a guest post from Ryan Holiday. 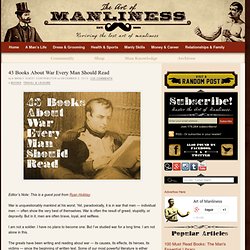 War is unquestionably mankind at his worst. Yet, paradoxically, it is in war that men — individual men — often show the very best of themselves. War is often the result of greed, stupidity, or depravity. But in it, men are often brave, loyal, and selfless. I am not a soldier. The greats have been writing and reading about war — its causes, its effects, its heroes, its victims — since the beginning of written text. The study of war is the study of life, because war is life in the rawest sense. Greenwall_report. Military Must Prep Now for 'Mutant' Future, Researchers Warn. Lockheed Martin tests its Human Universal Load Carrier exoskeleton. 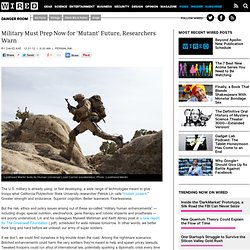 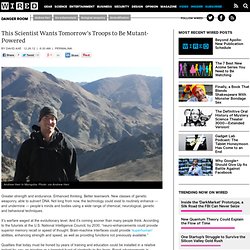 Photo: via Andrew Herr Greater strength and endurance. Enhanced thinking. Hacking the Human Brain: The Next Domain of Warfare. It’s been fashionable in military circles to talk about cyberspace as a “fifth domain” for warfare, along with land, space, air and sea. 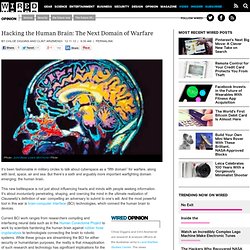 But there’s a sixth and arguably more important warfighting domain emerging: the human brain. This new battlespace is not just about influencing hearts and minds with people seeking information. It’s about involuntarily penetrating, shaping, and coercing the mind in the ultimate realization of Clausewitz’s definition of war: compelling an adversary to submit to one’s will. And the most powerful tool in this war is brain-computer interface (BCI) technologies, which connect the human brain to devices. Chloe Diggins and Clint Arizmendi are research & analysis officers at the Australian army’s Land Warfare Studies Centre. 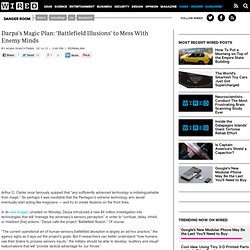 Clarke once famously quipped that “any sufficiently advanced technology is indistinguishable from magic.” So perhaps it was inevitable that the Pentagon’s extreme technology arm would eventually start acting like magicians — and try to create illusions on the front lines. In its new budget, unveiled on Monday, Darpa introduced a new $4 million investigation into technologies that will “manage the adversary’s sensory perception” in order to “confuse, delay, inhibit, or misdirect [his] actions.” Darpa calls the project “Battlefield Illusion.”