Crossrail: Where is it in the list of 'big digs'? 1 August 2013Last updated at 09:35 GMT By William Kremer BBC World Service The tunnelling for Crossrail, London's new east-west rail network, is now in its most intense phase - and the scale of the engineering challenge is as jaw-dropping as the cost is eye-watering. 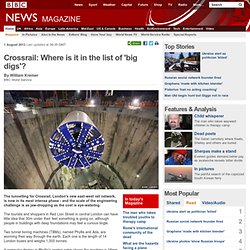 The tourists and shoppers in Red Lion Street in central London can have little idea that 30m under their feet something is going on, although people in buildings with deep foundations may feel a curious tingle. Two tunnel boring machines (TBMs), named Phyllis and Ada, are worming their way through the earth. Each one is the length of 14 London buses and weighs 1,000 tonnes. TBM: Tunnel Boring Machines - The Blog Below: A blog about everything Underground. How to you drill a hole through a mountain? 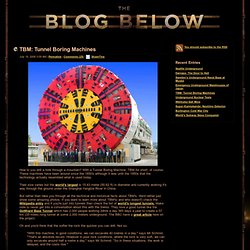 With a Tunnel Boring Machine, TBM for short, of course. Grande Strategy. 12/17/2013From Robert Clarke Imagine a machine tunneling seven miles per day through solid rock, boulders and clay... virtually anything below the waterline. 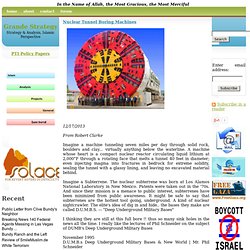 A machine whose heart is a compact nuclear reactor circulating liquid lithium at 2,000°F through a rotating face that melts a tunnel 40 feet in diameter; even injecting magma into fractures in bedrock for extreme solidity, sealing the tunnel with a glassy lining, and leaving no excavated material behind. Imagine a Subterrene. The nuclear subterrene was born at Los Alamos National Laboratory in New Mexico. Mining Magazine - Grosvenor launches tunnel boring machine. Anglo American’s US$1.9 billion Grosvenor project in Moranbah, Central Queensland, Australia reached a key project milestone on October 21 when its tunnel boring machine (TBM) operated for the first time. 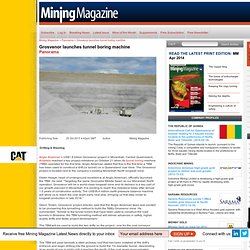 Anglo American stated that this is the first time a TBM has been used to construct a drift (or tunnel) on a Queensland coal mine. The Grosvenor project is located next to the company’s existing Moranbah North longwall mine. Dieter Haage, head of underground excellence at Anglo American, officially launched the TBM. He said: “Targeting the same Goonyella Middle Seam as our Moranbah North operation, Grosvenor will be a world-class longwall mine and its delivery is a key part of our growth planned in Moranbah. It is exciting to reach this milestone today after almost 1.5 years of construction activity. Glenn Tonkin, Grosvenor project director, said that the Anglo American team was excited to be pioneering this tunnelling method to build the 5Mt/y Grosvenor mine. Proposed SR 99 Bored Tunnel Underground Simulation March 2010. 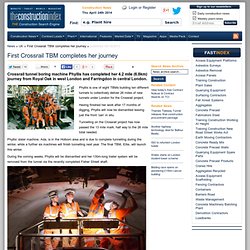 Phyllis is one of eight TBMs building ten different tunnels to collectively deliver 26 miles of new tunnels under London for the Crossrail project. Having finished her work after 17 months of digging, Phyllis will now be dismantled leaving just the front ‘can’ in situ. Tunnel boring machine to start excavating Bucharest’s future metro line M5 next week. Excavation for metro tunnels on the future new route Râul Doamnei – Eroilor in Bucharest will start on September 25, according to Bucharest metro company Metrorex. 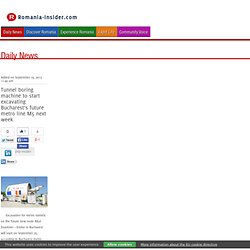 The Tunnel Boring Machine (TBM) is already mounted into the structural wall and all devices for drilling have been activated. Metrorex, which previously announced work on the tunnel would start mid-September, said it had completed several other activities to prepare for the actual drilling. The structure of tunnels and metro stations on the segment should be completed by the beginning of next year, while the entire segment Râul Doamnei—Eroilor should be finished early 2016. Crossrail's 1000 ton underground ladies. Published: 12th September 2013 It’s boring boring boring under London. 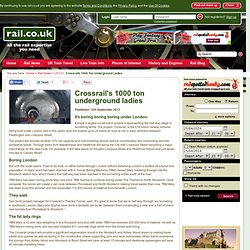 Europe’s largest construction project is approaching the half-way stage in tunnelling terms. The project, Crossrail, is the £16 billion railway scheme being built under London and in five years’ time will enable up to 24 trains an hour to run in each direction between Paddington and Liverpool Street. The project will provide another 10% rail capacity and overcrowding should reduce considerably and commuting become somewhat easier. Through trains from Maidenhead and Heathrow will serve the City with Liverpool Street becoming a major interchange on the new route.

Boring London But until the route opens, it has to be built, or rather bored through London without disturbing London’s surface structures and population. Qatar Tunnel News – tunnelbuilder.com. Tunnel. Currently the Doha Metro is the world’s largest infrastructure project at the planning stage. 82 km incorporating 25 stations will run underground in Phase 1. 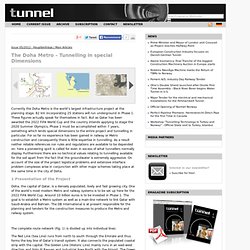 These figures actually speak for themselves in fact. But as Qatar has been awarded the 2022 FIFA World Cup and the country intends applying to stage the 2020 Summer Olympics, Phase 1 must be accomplished within 7 years, something which lends special dimensions to the entire project and tunnelling in particular. For so far no experience has been gained in railway or Metro construction and consequently there is little expertise in tunnelling. As a result neither reliable references nor rules and regulations are available to be depended on: here a pioneering spirit is called for even in excess of what tunnellers normally display. Qatar begins Doha metro tunnel awards - TunnelTalk. 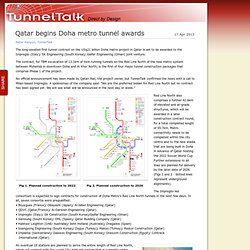 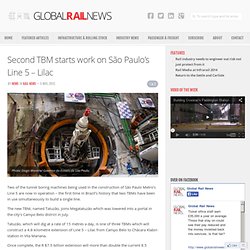 Two of the tunnel boring machines being used in the construction of São Paulo Metro’s Line 5 are now in operation – the first time in Brazil’s history that two TBMs have been in use simultaneously to build a single line. The new TBM, named Tatuzão, joins Megatatuzão which was lowered into a portal in the city’s Campo Belo district in July. Tatuzão, which will dig at a rate of 15 metres a day, is one of three TBMs which will construct a 4.8-kilometre extension of Line 5 – Lilac from Campo Belo to Chácara Klabin station in Vila Mariana.

Tunnel excavation became more complicated gradually as we approach the fault zone (after about 1800 m ).Near chainage 2359 m TBM is blocked, because of exceeding the plasticization threshold and the movement of a block of 25 cm from the right pier. Stability conditions have become so difficult to require continuous placement of liner plates. The quartzitic mica-schist is characterized by the presence of 3-4 joints, including the schistosity. Water ingress more, witnessed the imminent crossing of fault zones and / or fractures. In figure 3 is shown a sketch of the conditions of the rock mass condition at the face. La galleria (4.75 m di diametro) è stata scavata con un TBM aperta all’interno di micascisti quarzitici, sotto una copertura non maggiore di 800 m. Tunnel Manager - TBM Drives - Qatar - Qatar - Job: 58020829.