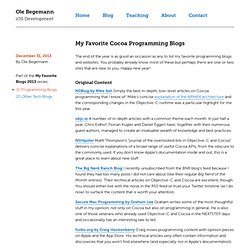 You probably already know most of these but perhaps there are one or two sites that are new to you. Happy new year! NSBlog by Mike Ash Simply the best in-depth, low-level articles on Cocoa programming that I know of. Mike’s concise explanation of the ARM64 architecture and the corresponding changes in the Objective-C runtime was a particular highlight for me this year. objc.io A number of in-depth articles with a common theme each month. NSHipster Mattt Thompson’s journal of the overlooked bits in Objective-C and Cocoa delivers concise explanations of a broad range of useful Cocoa APIs, from the obscure to the commonly used. The Big Nerd Ranch Blog I recently unsubscribed from the BNR blog’s feed because I found they had too many posts I did not care about (like their regular Big Nerd of the Month entries). 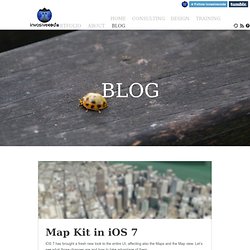 Let’s see what those changes are and how to take advantage of them. If you check the Maps app, you will notice a slight update in the cartography of the map and hybrid mode. This update aims to deliver clearer cartographic information, so some graphic elements (the roads, for example) are blended to the map and labeling stands our more. Pins, callouts and user location views have been updated to embrace the new iOS 7 UI too. There is also the new tintColor property, which applied to MKMapView will affect down all the elements to show callouts and location views with matching colors. iOS 7 has brought new ways you can look at the map: 3D mode. To control the 3D mode, open Xcode, create a Single View Application and add a MKMapView object in Interface Builder. Continuous panning Annotations - (void)showAnnotations:(NSArray *)annotations animated:(BOOL)animated 3D Camera Overlay Functionalities Eva.

iOS Programming Recipe 30: Using 3D Mapping. This week we’re gonna check out some of the mapping functionality available in iOS 7. 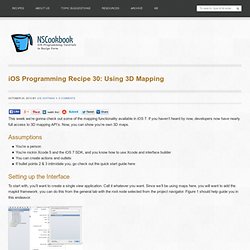 If you haven’t heard by now, developers now have nearly full access to 3D mapping API’s. Now, you can show you’re own 3D maps. Assumptions You’re a personYou’re rockin Xcode 5 and the iOS 7 SDK, and you know how to use Xcode and interface builderYou can create actions and outletsIf bullet points 2 & 3 intimidate you, go check out the quick start guide here Setting up the Interface To start with, you’ll want to create a single view application. Figure 1: Adding the mapkit framework Open up the Main.storyboard file and drag a Map View from the object library on the bottom right hand side. Figure 2 : The finished interface (for now) Ok, Now we’re ready to head into the code. Showing a Coordinate on the Map We’ll start with the simplest case, and that’s just adding a coordinate to the map. Create a new action for the “GO!”

When completed, the interface section should look like Code Chunk 1. Maps in 3D! iOS-Blog - Objective-C Tutorials, Tools and Resources for iPhone Developers. Objective-C: Introduction to Categories Have you ever wished you could add a method to an existing class that you don’t have the code for? 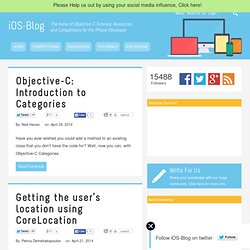 Well, now you can, with Objective-C Categories. Read Full Article Getting the user’s location using CoreLocation In this iPhone application development tutorial we are going to create an app which will present the user’s location info such as; geographical coordinates, altitude and speed using the CoreLocation Framework. Read Full Article. iOS 7: Hello World Tutorial. This is a “Hello World” tutorial to iOS programming. 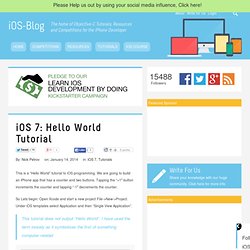 We are going to build an iPhone app that has a counter and two buttons. Tapping the “+1″ button increments the counter and tapping “-1″ decrements the counter. So Lets begin: Open Xcode and start a new project File->New->Project. Under iOS templates select Application and then “Single View Application”. This tutorial does not output “Hello World”.