Fork2. It is an exciting time to learn iOS, with the release of iOS8 and Swift. 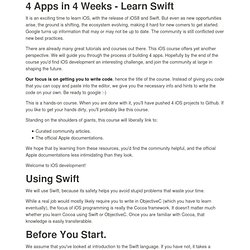 But even as new opportunities arise, the ground is shifting, the ecosystem evolving, making it hard for new comers to get started. Google turns up information that may or may not be up to date. The community is still conflicted over new best practices. There are already many great tutorials and courses out there. This iOS course offers yet another perspective. Our focus is on getting you to write code, hence the title of the course. AVAudioPlayer Class Reference. An instance of the AVAudioPlayer class, called an audio player, provides playback of audio data from a file or memory. 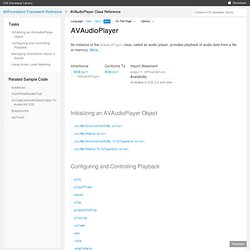 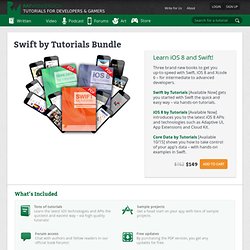 You’ll be introduced to trait collections, size classes and universal storyboards, each of which will not only help you build the best interfaces for the current crop of iOS devices, but for future ones as well.    Here’s a quick overview of the chapters in this section: Section II: App Extensions App Extensions are one of the most anticipated features of iOS 8; they let you extend your app’s content and functionality throughout the rest of the OS. Once you’ve completed the following seven chapters you’ll no doubt wonder how you ever survived without App Extensions – both as a developer and as a user. 10 Swift IOS open-source projects you cannot ignore — Swift Programming. Apple-Pay-Human-Interface-Guidelines.pdf. Swift Programming Blog - List of Swift Cheat Sheets.

Swift Programming Blog - List of Swift Cheat Sheets. How to Make a Freaking iPhone App - with iOS 8 and Swift by Rick Walter. I am making the course that I wish I had when I was trying to learn iOS development. 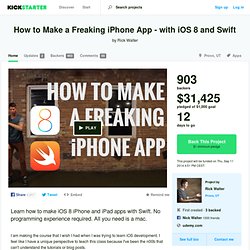 I feel like I have a unique perspective to teach this class because I've been the n00b that can't understand the tutorials or blog posts. I will walk you through everything you need to start making apps. Getting Xcode (the program we use to make apps) setup and on your machine, making a developer account with Apple, and running the iPhone and iPad simulator on your mac. I firmly believe that the best way to learn is by doing. This class will focus on making apps. ...connects with Facebook and Twitter...uses the front and rear cameras on iOS devices...records audio with the microphone...uses GPS information...connects with PARSE to make a social network Once each of these apps are built, I will tell you everything you need to know to submit these apps to the App Store.

I have been blown away by the support for this class. Best Apple Swift Tutorials for Beginners. Those of you who attended or watched this year’s WWDC well know about the new programming language released by Apple. 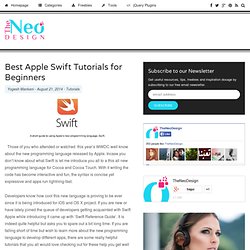 Incase you don’t know about what Swift is let me introduce you all to a this all new programming language for Cocoa and Cocoa Touch. With it writing the code has become interactive and fun, the syntax is concise yet expressive and apps run lightning-fast. Developers know how cool this new language is proving to be ever since it is being introduced for iOS and OS X project. The Swift Programming Language: Summary of the Grammar. Alamofire. Swift has hit a reset button on the iOS developer community. 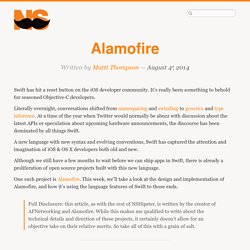 It’s really been something to behold for seasoned Objective-C developers. Literally overnight, conversations shifted from namespacing and swizzling to generics and type inference. At a time of the year when Twitter would normally be abuzz with discussion about the latest APIs or speculation about upcoming hardware announcements, the discourse has been dominated by all things Swift. SwiftToolbox. How I used Swift to put Reddit JSON in an iOS device - John Mullins. A buddy of mine suggested I try to parse the JSON from Reddit to a table view as an exercise today. 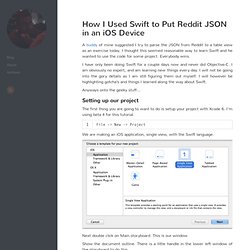 I thought this seemed reasonable way to learn Swift and he wanted to use the code for some project. Everybody wins. I have only been doing Swift for a couple days now and never did Objective-C. I am obviously no expert, and am learning new things every day. I will not be going into the gory details as I am still figuring them out myself.

Anyways onto the geeky stuff… Setting up our project The first thing you are going to want to do is setup your project with Xcode 6. We are making an iOS application, single view, with the Swift language. Next double click on Main.storyboard. Show the document outline. Highlight our View Controller for this scene, and navigate to the attributes inspector. Boolean - Swift Blog. iOS and Swift Beginner Tutorial: App like Twitter using Parse Part 1. Files and Initialization - Swift Blog. By now, most of you have written a small Swift app or experimented in the playground. 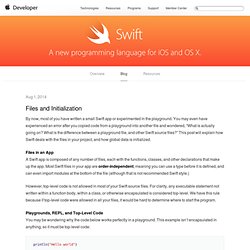 You may even have experienced an error after you copied code from a playground into another file and wondered, “What is actually going on? What is the difference between a playground file, and other Swift source files?” This post will explain how Swift deals with the files in your project, and how global data is initialized. Files in an App A Swift app is composed of any number of files, each with the functions, classes, and other declarations that make up the app. Using MapKit with Swift. I've been using Swift a lot lately. 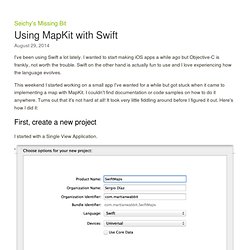 I wanted to start making iOS apps a while ago but Objective-C is frankly, not worth the trouble. Swift on the other hand is actually fun to use and I love experiencing how the language evolves. This weekend I started working on a small app I've wanted for a while but got stuck when it came to implementing a map with MapKit. I couldn't find documentation or code samples on how to do it anywhere. Turns out that it's not hard at all! Tutorial: Get Facebook Friends in Swift. Online Courses in Web Development, Mobile Development, and Design.

Design with Swift - Design+Code. Swift is much easier to follow, especially if you've never done iOS development before. 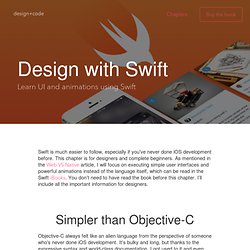 This chapter is for designers and complete beginners. As mentioned in the Web VS Native article, I will focus on executing simple user interfaces and powerful animations instead of the language itself, which can be read in the Swift iBooks. You don’t need to have read the book before this chapter. I’ll include all the important information for designers. Interacting with C Pointers - Swift Blog. Build Your First iOS App with Swift. By Todd Perkins | Thursday, July 17, 2014 Interested in building iOS or Mac apps? The Swift programming language lets you do that faster than ever before. In this brief tutorial, you’ll see how you can quickly create an app using Swift. Installing Xcode To write Swift code, you’ll need Xcode, which can be found at Click the Xcode button, then click the button to download Xcode 6 Beta. Creating Your First App Launch Xcode and at the Welcome Screen, click the button to create a new Xcode project. SWIFT Tutorial - iOS MapKit application Development.

In today’s Swift tutorial, we will explore MapKit. MapKit is a nice little framework developed by Apple. We will learn to integrate this MapKit with the Google Map javascript api and thus develop a complete application using Swift, like the one you can see below: App Description The very first view will have a textbox. The user must first input their Area and City. LearnSwift.tips. Swift Cheat Sheet. A quick cheat sheet and reference guide for Apple's Swift language. This guide intends to cover all the key features of Swift, including Strings, Arrays, Dictionaries and Flow Control. Swift is a new programming language for developing iOS and OS X apps that was introduced by Apple in June 2014. Variables var myInt = 1var myExplicitInt: Int = 1 var x = 1, y = 2, z = 3 myExplicitInt = 2 Constants let myInt = 1 myInt = 2 Strings. iPhone Tutorials. Learn Swift - Tutorials, Code Samples, References and more! Apple Swift Programming Language Resources and Tutorials for iOS and OS X app development.

Developing iOS 7 Apps for iPhone and iPad - Download Free Content from Stanford. Building assert() in Swift, Part 1: Lazy Evaluation - Swift Blog. Swift 101 - Working with Swift's New Optional Values. The Swift programming language has a new feature called optionals that were not previously available in Objective-C. They are similar to optional types in Java and nullable types in the C# programming language. Why Use Optionals? You may be thinking "I can ignore optionals—it's a feature I'll never use," but I recommend that you read further. YouTube. SwiftDate – A Smart Date/Calendar Library Written in Swift Download: – Swift. SwiftDate – A Smart Date/Calendar Library Written in Swift Download: github.com/haginile/SwiftDate SwiftDate is a powerful Date/Calendar framework written completely in Swift.

It is partially based on QuantLib, the popular quantitative finance library, and is designed to be very friendly to financial applications. Even if you are not building financial apps, you may still find its date shifting and business calendar capabilities useful. The SwiftDate framework is released under the MIT license and is available on GitHub. Swift with Sam - A beginner's guide to building clean, fun iOS apps. Swift iPhone Development Tutorial For Beginners. Apple Swift Programming Language Tutorial Series. Swift. Upload Twitter. Learn Swift Programming Language. Swift Language. Mastering Swift Tutorial Series. Swift Tutorials: Playground in Xcode 6 Beta. Learn Swift - Tutorials, Code Samples, References and more! From Objective-C to Swift: thoughts and hints - Think & Build. In this article I want to share with you some of the thoughts I had along the way during my transition from Objective-C to Swift. I’ll try to give you hints and I’ll discuss the main pitfalls, trying to compare, when possible, the different approaches of these two languages.

So without further ado let’s dive into the core of the article! Single file vs Interface-Implementation files A first big change that is worth mentioning is the dismissal of the interface.h/implementation.m structure. I have to admit that I’m a strong supporter of that model; Obtaining and sharing information about a class just via the interface file is safe and quick. In Swift interface and implementation aren’t split in two files. There are some caveats that we can use if we really are unable to tolerate this huge change: The first is obvious: Using common sense. Here is a short example mixing the two: Swift iOS Tutorial - Dismiss the Keybpard. So So Swift. YouTube. Developer Forums: Swift. Swift Tutorial for iOS: Part 4 - MapKit App Displaying World's Tallest Church. So So Swift. How to Make a Game Like Candy Crush with Swift Tutorial.

Swift 101 - Classes, Variables, Properties & Methods. Swift 101 - New, Powerful Enumerations. In this post, I'm going to demonstrate some of the powerful new features of enumerations in Swift. How to make awesome UI components in iOS 8 using Swift and XCode 6 - IBDesignables and IBInspectable. In Xcode 6 two new interface builder declaration attributes were introduced: IBInspectable and IBDesignable. IBInspectableexposes class properties in the interface builder Attribute Inspector, and IBDesignable updates the view in realtime! RW-Swift-Cheatsheet-0_3. Game development tutorial: Swift and SpriteKit - Part 1 A Simple iOS/Mac OS App. Sososwift. Introduction to SWIFT - 01 Variables. Chris Lattner's Homepage. To answer a FAQ: Yes, I do still write code and most of it goes to llvm.org. However, due to the nature of the work, I usually can't talk about it until a couple of years after it happens. :) The Swift language is the product of tireless effort from a team of language experts, documentation gurus, compiler optimization ninjas, and an incredibly important internal dogfooding group who provided feedback to help refine and battle-test ideas.

Of course, it also greatly benefited from the experiences hard-won by many other languages in the field, drawing ideas from Objective-C, Rust, Haskell, Ruby, Python, C#, CLU, and far too many others to list. The Xcode Playgrounds feature and REPL were a personal passion of mine, to make programming more interactive and approachable. The Xcode and LLDB teams have done a phenomenal job turning crazy ideas into something truly great. For more details about LLVM, see: Trending Swift repositories on GitHub today. We ❤ Swift. Swift iOS Tutorial - Build a Checklist App: Part One. Fullstackio/FlappySwift.