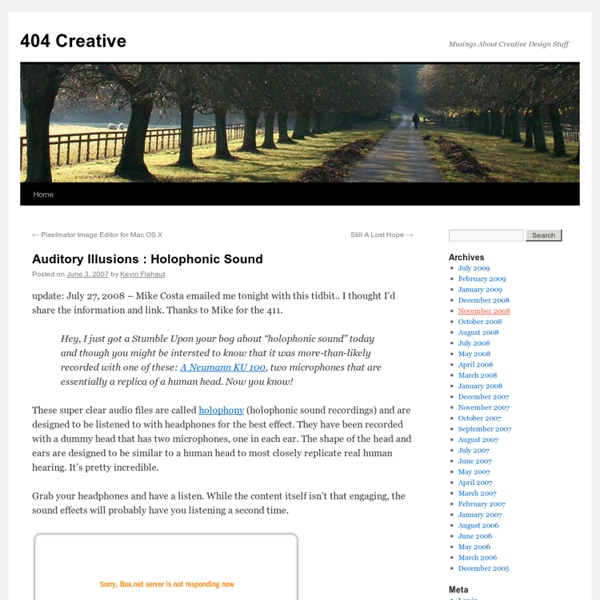 update: July 27, 2008 – Mike Costa emailed me tonight with this tidbit.. I thought I’d share the information and link. Thanks to Mike for the 411. Hey, I just got a Stumble Upon your bog about “holophonic sound” today and though you might be intersted to know that it was more-than-likely recorded with one of these: A Neumann KU 100, two microphones that are essentially a replica of a human head. Now you know! These super clear audio files are called holophony (holophonic sound recordings) and are designed to be listened to with headphones for the best effect. Grab your headphones and have a listen. more examples at www.holophonic.ch

history of animation Quadrant Online - Six myths about "deniers" Global warming “deniers”: myth-conceptions abound They’ve been compared to “flat earthers” and even “Holocaust deniers”. And, as the recent “Climategate” email scandal reveals, they have been blacklisted in certain professional circles. Scientists who disagree with the current consensus on Anthropogenic Global Warming (AGW) are dismissed by some colleagues and politicians as ignorant and irrelevant. There are numerous myths surrounding those who are wrongly labeled “deniers”. 1. No one questions that there has been a slight, but unmistakable increase in global temperature since the end of the “Little Ice Age” in the early nineteenth century. Numerous articles have appeared in scientific journals over the last several years documenting a warm bias in official temperature measurements. 2. Some of the world’s foremost atmospheric scientists, physicists, astronomers, and geologists disagree with the current consensus on anthropogenic global warming. 3. 4. But the blade cuts both ways. 5.

Before I Die… in NOLA What matters most to you Interactive public art project that invites people to share their personal aspirations in public. After losing someone she loved and falling into depression, Chang created this experiment on an abandoned house in her neighborhood to create an anonymous place to help restore perspective and share intimately with her neighbors. The project gained global attention and thanks to passionate people around the world, over 1000 Before I Die walls have now been created in over 70 countries, including Kazakhstan, Iraq, Haiti, China, Ukraine, Portugal, Japan, Denmark, Argentina, and South Africa. The walls are an honest mess of the longing, pain, joy, insecurity, gratitude, fear, and wonder you find in every community, and they reimagine public spaces that nurture honesty, vulnerability, trust and understanding. 2011, New Orleans, LA. Cordoba, Argentina. Najaf, Iraq. Brooklyn, NY. Almaty, Kazakhstan Savannah, GA. Pohang City, South-Korea. San Francisco, CA.

What Our Future Holds for Us According to Leading Experts There are 149 separate flying-car projects under way in the United States. Most of what we think we know about the future comes from movies, books and TV shows. But what’s really coming along in the next 10, 20 or even 50 years? To get a clue, we Googled around on the Internet – now that would have been science-fiction to us 20 years ago- and also talked to a quartet of experts who make their lives thinking of what might be: - Michael Rogers, recent futurist-in-residence at The New York Times and the Practical Futurist on MSNBC; now creating a TV series set in 2050. - Seth Shostak, senior astronomer at the SETI Institute in Mountain View, Calif., which searches for signals from outer space. - Lois Bujold, four-time Hugo Award winner for science-fiction novels, author of the new book “Cryoburn.” - Thomas Frey of the DaVinci Institute, a futurist think tank in Colorado. They gave their ideas on seven things we pitched at them. Anyone else out there? Can you see me? Will I have my flying car?

Designers Spin Spidey-Worthy Webs From Packing Tape Packing tape has gotten MacGyver out of many a jam, but he never managed to make an entire home out of the stuff. So he could probably learn something from Viennese/Croatian design collective For Use/Numen. The team uses nothing but packing tape to create huge, self-supporting cocoons that visitors could climb inside and explore. Installed three times in the past year, the next deployment will be next week from June 9–13 at DMY Berlin's International Design Fair, which is now in its 8th year. The installations, which look like the work of horrifyingly large arachnids, grew in scale and scope as the year progressed, first deployed inside a small Croatian gallery, then an abandoned attic during October’s Vienna Design Week. At the last installation inside Odeon, a former stock exchange building in Vienna, the group used nearly 117,000 feet and 100 pounds of tape.

An Apology: To the Girl in the Parking Garage It was late. We happened to be walking on the same path. I knew you were nervous--I would be too if I was a petite female, walking alone on a desolate and dark city street at 1:00 a.m. You were about fifty feet in front of me. I was going to turn right. I considered taking another turn or stopping for a smoke. You walked into the sanctuary of the garage, and I paused to have a smoke. The freezing wind helped me smoke my cigarette down to the filter in record time, but I thought my nicotine break gave you enough time to get to your car without some strange guy on your heels. The elevator stopped on floor 3. I wanted to get off the elevator first to show you that I wasn't stalking you, to let you walk behind me for a change. To make things worse, a penny was stuck in the grooves of the sole of my shoe. The parking deck was empty of cars, save mine and one parked right next to it. I sighed, put my car into gear, and backed out of my space. As I pulled away, I smiled and waved at you.

Arts, design blog The 5 Scientific Experiments Most Likely to End the World Let's face it, we really trust science. In fact, studies suggest that the vast majority of people will murder another human being, if a guy in a lab coat tells them it's OK. But surely in their insatiable curiosity and desire to put knowledge above all things, science would never, say, inadvertently set off a chain of events that lead to some sort of disaster that ended the world. Well, here's five experiments that may prove us wrong. Recreating the Big Bang Scientists are kind of pissed that they weren't around when the Big Bang happened. The solution, science says, is to make it happen again. God, 1. What Could Possibly Go Wrong? Well, first imagine an apocalyptic nuclear holocaust. So, Basically It's Like... Imagine you have a huge tanker truck parked outside a children's hospital. How Long Have We Got? Meet the Large Hadron Collider. This is not only the largest particle accelerator ever built, it's the largest anything ever built. Risk Level: 3 The Quantum Zeno Effect Not Pictured: Life.

Global Food Disparity: A Photo Diary In an increasingly globalized world, it’s still sometimes shocking to see just how disparate our lives are compared with other human beings around the world. A book of photographs by Peter Menzel called "Hungry Planet: What the World Eats" ("©Peter Menzel www.menzelphoto.com. Ten Speed Press, published in 2005) makes a relevant point with great irony: at a time when hundreds of millions of people don't have enough to eat, hundreds of millions more are eating too much and are overweight or obese. In observing what six billion eat for dinner the authors note, "Today, more people are overweight than underweight." It is these cultural differences, emphasized and reinforced by the author, which exemplifies the lifestyles and dietary habits of people around the world. You can buy the book here. Meet the The Manzo family of Sicily. Germany: The Melander family of Bargteheide Food expenditure for one week: 375.39 Euros or $500.07.