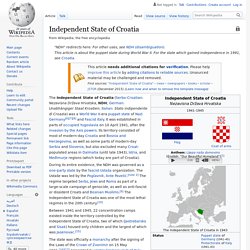 Indonesian mass killings of 1965–66. Anti-communist killings and unrest in Indonesia following a coup d'état attempt The Indonesian mass killings of 1965–66 (Indonesian genocide,[11][2][3]:4 Indonesian Communist Purge, Indonesian politicide,[12][13] or the 1965 Tragedy) (Indonesian: Pembunuhan Massal Indonesia & Pembersihan G.30.S/PKI) were large-scale killings and civil unrest that occurred in Indonesia over several months, targeting Communist Party of Indonesia (PKI) party members, Communist sympathisers, Gerwani women, ethnic Javanese Abangan,[1] ethnic Chinese and alleged leftists, often at the instigation of the armed forces and government, which were supported by the United States and other Western countries.[14][15][16][17] It began as an anti-communist purge following a controversial attempted coup d'état by the 30 September Movement. 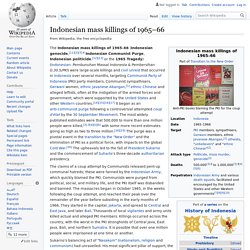 The last mammoths died on a remote island. The last woolly mammoths lived on Wrangel Island in the Arctic Ocean; they died out 4,000 years ago within a very short time. 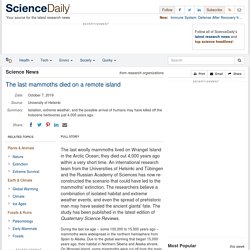 An international research team from the Universities of Helsinki and Tübingen and the Russian Academy of Sciences has now reconstructed the scenario that could have led to the mammoths' extinction. The researchers believe a combination of isolated habitat and extreme weather events, and even the spread of prehistoric man may have sealed the ancient giants' fate. The study has been published in the latest edition of Quaternary Science Reviews. During the last ice age -- some 100,000 to 15,000 years ago -- mammoths were widespread in the northern hemisphere from Spain to Alaska. Due to the global warming that began 15,000 years ago, their habitat in Northern Siberia and Alaska shrank. The Life-Sized City Blog: Danish Army's Bicycle Battalions (Short History of) The Naming of Wars: How Wars Are Named. The question of how are wars named comes up quite often. 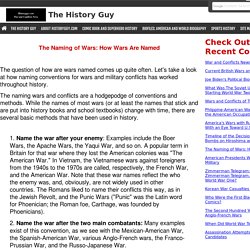 Let's take a look at how naming conventions for wars and military conflicts has worked throughout history. Phoney War. The quiet of the Phoney War was punctuated by a few Allied actions. 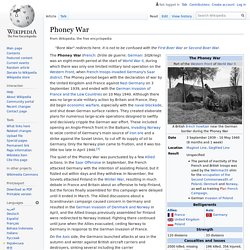 In the Saar Offensive in September, the French attacked Germany with the intention of assisting Poland, but it fizzled out within days and they withdrew. In November, the Soviets attacked Finland in the Winter War, resulting in much debate in France and Britain about an offensive to help Finland, but the forces finally assembled for this campaign were delayed until it ended in March. The Allied discussions about a Scandinavian campaign caused concern in Germany and resulted in the German invasion of Denmark and Norway in April, and the Allied troops previously assembled for Finland were redirected to Norway instead. Fighting there continued until June when the Allies evacuated, ceding Norway to Germany in response to the German invasion of France. Terminology[edit] Battle of Kadesh. Coordinates: The battle is generally dated to 1274 BC from the Egyptian chronology,[11] and is the earliest battle in recorded history for which details of tactics and formations are known. 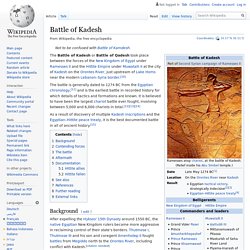 It is believed to have been the largest chariot battle ever fought, involving between 5,000 and 6,000 chariots in total.[12][13][14] Nakahama Manjirō. Nakahama Manjirō (中濱 万次郎, January 27, 1827 – November 12, 1898), also known as John Manjirō (or John Mung),[1] was one of the first Japanese people to visit the United States and an important translator during the Opening of Japan.[2] Voyage to America[edit] Nakahama Manjirō's report of his travels, 1850s, Tokyo National Museum. 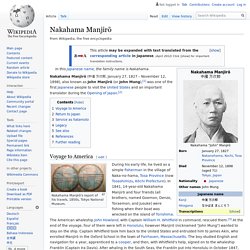 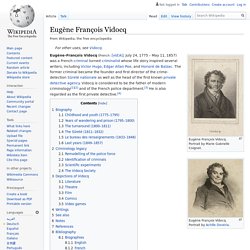 Portrait by Marie Gabrielle Coignet. Biography[edit] Eugène François Vidocq was born during the night of 23 to 24 July 1775 as the third child of Henriette Françoise Vidocq (maiden name Dion, 1744–1824) and her husband, the baker Nicolas Joseph François Vidocq (1744–1799) in Arras in the Rue du Mirroir-de-Venise,[N 1] in France. Childhood and youth (1775–1795)[edit] Little is known about his childhood; most of it is based on his ghost-written autobiography and a few documents in French archives.

Weimar Republic. Germany state in the years 1918/1919–1933 The Weimar Republic (German: Weimarer Republik [ˈvaɪmaʁɐ ʁepuˈbliːk] ( listen)) is an unofficial historical designation for the German state from 1918 to 1933. 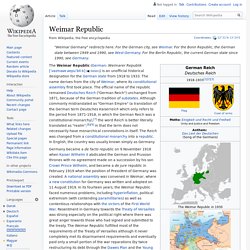 The name derives from the city of Weimar, where its constitutional assembly first took place. The official name of the republic remained Deutsches Reich ("German Reich") unchanged from 1871, because of the German tradition of substates. Plymouth Rock. History of Plymouth Rock[edit] Early history and identification[edit] Plymouth Rock is geologically classified as a Dedham Granite boulder and a glacial erratic.[4] The two most significant primary sources on the founding of Plymouth Colony are Edward Winslow's Mourt's Relation and Bradford's history Of Plymouth Plantation, and neither refers to Plymouth Rock.[5] The rock first attracted public attention in 1741 when the residents of Plymouth began plans to build a wharf which would bury it. 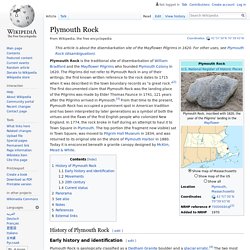 Culper Ring. Background[edit] Washington became convinced that well-organized intelligence was a necessity after several intelligence failures, including the capture and execution of Nathan Hale. Sackett had developed some advancements and new methods for spying, such as keeping an agent in enemy territory and finding a means of regular communication, which he detailed in a letter to Washington on April 7.[11] He discovered that the British were building flat-bottomed boats to use in a campaign against Philadelphia;[12] he did not produce enough correct intelligence fast enough for Washington, however, and he was soon paid and dismissed.[13] Early in 1777, American Colonel Elias Dayton set up a spy network on Staten Island to work in parallel with established American intelligence agent John Mersereau.[14]

Champa. We ask you, humbly: don't scroll away. Hi reader, it seems you use Wikipedia a lot; that's great! This is the 4th appeal we've shown you. It's awkward, but this Monday we need your help. We don't charge a subscription fee. Kaga ikki. The Kaga ikki, also known as The Peasants' Kingdom, was a theocratic feudal confederacy that emerged in Kaga Province (present-day southern Ishikawa Prefecture), Japan, during the late 15th and early 16th centuries.

The Kaga ikki was a faction of the Ikkō-ikki, mobs of peasant farmers, monks, priests, and jizamurai (lesser nobility) that espoused belief in Jōdo Shinshū Buddhism. Though nominally under the authority of the head abbot of the Hongan-ji, the Monshu, the ikkō-ikki proved difficult to control. During the Ōnin War, the ikki in Kaga, with the approval of the Monshu Rennyo, helped restore Togashi Masachika to the position of shugo (military governor).

However, by 1474 the ikki fell into conflict with Masachika, and in late 1487, they launched the Kaga Rebellion. Masachika was overthrown, and Togashi Yasutaka, his uncle, took his place as shugo. In 1531, a civil war erupted as two factions within the Kaga ikki vied for control. Benkei. Saitō Musashibō Benkei (西塔武蔵坊弁慶, 1155–1189), popularly called Benkei, was a Japanese warrior monk (sōhei) who lived in the latter years of the Heian Period (794-1185)[1]. Benkei had a varied life, first becoming a monk, then a mountain ascetic, and then a rogue warrior. As he lived, he came to respect and serve the famous warrior Minamoto no Yoshitsune. He is commonly depicted as a man of great strength and loyalty, and a popular subject of Japanese folklore, showcased in many ancient and modern literatures and productions.

Early life[edit] Everyday Murder: Nazi Atrocities, Committed by Ordinary People. March 18, 2008 04:54 PM. Courtesan. A courtesan was originally a courtier, which means a person who attends the court of a monarch or other powerful person.[1] Operation Mincemeat. Gavelkind. Robert Smalls. Robert Smalls (April 5, 1839 – February 23, 1915) was an enslaved African American who escaped to freedom and became a ship's pilot, sea captain, and politician. Early life[edit] Robert Smalls was born in 1839 to Lydia Polite, a woman enslaved by Henry McKee, who was most likely Smalls' father.[1] She gave birth to him in a cabin behind McKee's house, on 511 Prince Street in Beaufort, South Carolina.[2] He grew up in the city under the influence of the Lowcountry Gullah culture of his mother. Tecun Uman. Maginot Line. The night a river of whiskey ran through the streets of Dublin. Today I Discovered Japan's Flag Was Redesigned In 1999 And You Probably Didn't Even Notice.

Dorángel Vargas. Biography[edit] Dorángel Vargas was born in 1956 to poor farmers. His priors include three arrests, two of them for minor offenses (theft of chickens and cattle). Hrafna-Flóki Vilgerðarson. Wadi El Hitan. Sykes–Picot Agreement. Arnaud Beltrame. Julie d'Aubigny. The Man Who Died, Came Back to Life and Won the Lotto Twice- the Second Time When Reenacting the First Win for the Media. Hetty Green. Did Albania confiscate four whiskey-type submarines from the Soviet Union? Peter Madsen sentenced to life for murdering journalist Kim Wall. Philadelphia Experiment. Tunguska event. Probably the best explanation of the Dyatlov pass case I've heard. : UnresolvedMysteries. Great Pyramid tombs unearth 'proof' workers were not slaves. Did You Know... In 1386, a pig was publicly tried and executed for murder? - Filla - Pulse. Rodama: a blog of 18th century & Revolutionary French trivia: A Counter-Revolutionary parrot.

The unspeakable war and the savage Japanese soldiers who would never surrender. Thuần Ngô - Ngày này năm xưa. Ngày 25 tháng 8 năm 1945... The Secret: a thirty year old unsolved treasure hunt : UnresolvedMysteries. 1989: Hungary reburies fallen hero Imre Nagy. Iran 1979: the Islamic revolution that shook the world. The Baltic Way. Why were convicts transported to Australia? Indian-Killer Andrew Jackson Deserves Top Spot on List of Worst US Presidents - Indian Country Media Network. Why did German fighter aces have so many more kills than aces from other countries? : AskHistorians. 313 The Edict of Milan. The last kamikaze: two Japanese pilots tell how they cheated death. History of Sericulture - Insects.Orkin.com. 11 Amazing People Who Literally Saved Millions Of Lives. Why aren't there city-states anymore? What the autonomous cities of the Middle Ages can teach us about our urban future. Why there were so many German aces...

Royal marriages throughout history. SIMON BOLIVAR. Did You Know The Austrian Army Defeated Itself In The 1788 Battle Of Karansebes? - WorldAtlas.com. Solomon's Temple. Why People Wear Perfumes and Other Fragrances. The horrifying story of the last death by smallpox. Antarctic Explorers: Roald Amundsen. Magna Carta - The British Library. How German POWs pulled off the largest escape ever. 40 facts about Dunkirk 75 years after the famous evacuation. Lifelong secret of Everest pioneer: I discovered George Mallory's body in 1936. Why Bathing Was Uncommon in Medieval Europe.