Stream 58 Hours of Free Classical Music Selected to Help You Study, Work, or Simply Relax. We are bombarded by music, all the time, whether we like it or not. 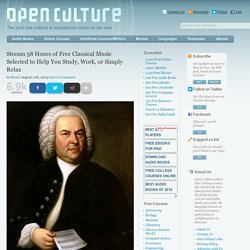 In many cases—such as those almost daily, inescapable trips to the grocery store, drug store, pet store, what-have-you store—the musical accompaniment to our journey through life has been chosen specifically for its ability to make us buy things: However grating we may find the soft rock, lite pop, or easy listening that pumps out of pharmacy speaker systems, some sinister cabal of marketing researchers determined long ago that schmaltz equals sales. And so we endure yet another terrible pop song while waiting in line with our essentials. For people like myself—highly sensitive to sound and unable to tune out bad background music—the experience can be excruciating. In our own private spaces—offices, cars, the space between our ears with headphones on—we become our own sound designers.

Related Content: Download Free Music from 150+ Classical Composers, Courtesy of Musopen.org Philip K. Jazz & Blues Television. How To Get Pissed Like A Banker In London. The City of London: home to bankers and architecturally fascinating pubs — many of which used to be banks. 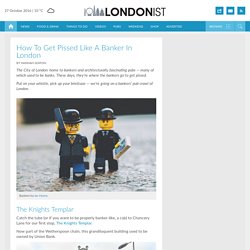 These days, they're where the bankers go to get pissed. Where To Drink Coffees From Around The World In London. WiFi Genius w/ UK Plug - Instantly Double Your WiFi Range – Dude Gadgets. NO MORE WiFi Blind Spots! 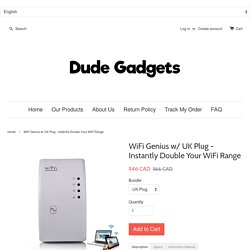 Now you can Instantly Double Your WiFi Range and boost wifi signal by simply plugging in Wifi Genius. Wifi Genius is PERFECT for your house, apartment, office building and any other place where there are WiFi blind spots and lets you Enjoy Strong WiFi Signal Anywhere You Go. WiFi Genius was designed to provide True Universal Fit, it's compatible with all kinds of routers and network cards. Simply plugging in Wifi Genius within the existing WiFi area and following included easy installation steps, you can Instantly Double Your WiFi Range! Metaspoon. Keeping a house clean can be one heck of a challenge, and to be honest, include me in the group of people who are not very good at it. 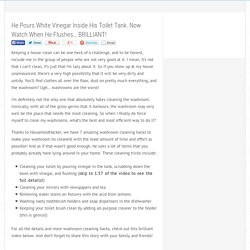 I mean, it’s not that I can’t clean, it’s just that I’m lazy about it. So if you show up at my house unannounced, there’s a very high possibility that it will be very dirty and untidy. You’ll find clothes all over the floor, dust on pretty much everything, and the washroom? Ugh… washrooms are the worst! I’m definitely not the only one that absolutely hates cleaning the washroom. Taking Notes By Hand May Be Better Than Digitally, Researchers Say. Laptops are common in lecture halls worldwide.

Students hear a lecture at the Johann Wolfang Goethe-University on Oct. 13, 2014, in Frankfurt am Main, Germany. Thomas Lohnes/Getty Images hide caption toggle caption Thomas Lohnes/Getty Images Laptops are common in lecture halls worldwide. The Cure’s Robert Smith names his Top 30 songs of the ’80s. Robert Smith of The Cure hosted a special two-hour countdown of his top 30 favorite songs from the ‘80s on Sirius XM’s 1st Wave channel on Friday. 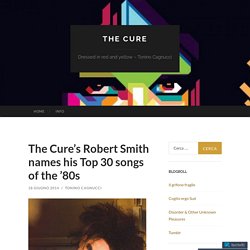 Curious what songs he picked? Here’s the list, in alphabetical order: Questions all Jeremy Corbyn supporters need to answer. Brexit, Trump: the trouble with claiming we’re in a post-truth era. A neat, if alarming, explanation for the astonishing rise of political outsiders across the western world is the idea that we live in a “post-truth era”: one in which support for outsiders soars when they make preposterous claims that are obviously not true. 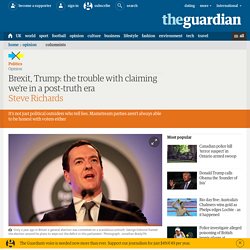 In contrast, when those who are seen to be on the inside – elected politicians and policy experts – counter with informed assessments, their popularity slumps. There is something in this. Uncontaminated by the complexities of power, the outsiders’ propositions are untested. Jeremy Corbyn’s Labour opponents should accept that their failures created him. Unless there is a dramatic and unlikely political upset, Jeremy Corbyn will again win the Labour leadership contest. 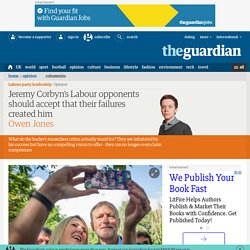 It will be a victory gifted by his opponents. Last year, his triumph was dismissed as a combination of madness, petulance and zealotry. But many commentators lack any understanding or curiosity about political movements outside their comfort zone. Political analysts who scramble over one another to understand, say, the rise of Ukip have precious little interest in a similar treatment of Corbynism, abandoning scholarship for sneers. The likes of Ukip or Donald Trump or the French Front National are understood as manifestations, however unfortunate, of genuine grievances: the movements behind Bernie Sanders, Podemos and Jeremy Corbyn are dismissed as armies of the self-indulgent and the deluded. Ancient Egypt In London: 10 Places. Ah London. 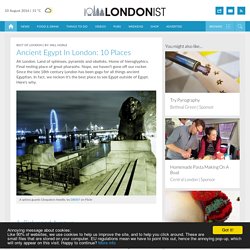 Land of sphinxes, pyramids and obelisks. Home of hieroglyphics. Final resting place of great pharaohs. Pressed to the Edge: Why vinyl hype is destroying the record. We have a problem. 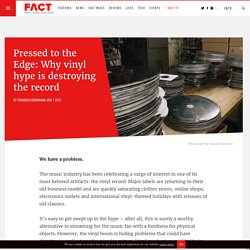 The music industry has been celebrating a surge of interest in one of its most beloved artifacts: the vinyl record. Major labels are returning to their old business model and are quickly saturating clothes stores, online shops, electronics outlets and international vinyl-themed holidays with reissues of old classics. London’s Strangest Restaurants. The oddest eateries in town. For better and worse... The one where you can get a haircut… Hurwundeki close to Cambridge Heath station has a particularly peculiar niche. The Best Places To Watch Jazz On A Budget In London. Jazz bars evoke images of smoky cities, dangerously provocative tunes, and prohibited (illegal) alcohol. But in London, at face value this couldn’t be further from the truth. Home to a legion of world class venues, including the legendary Ronnie Scott's, Vesper, and 606 Club, these bars are just out of the league of so many lovers of impromptu good music. The jazz is incredible of course, but many are eye-wateringly expensive, or require you to book months ahead.

Perfect for a special occasion, but less so if you love jazz and fancy spontaneous music without breaking the bank. Open Culture. Philosopher Sam Harris Leads You Through a 26-Minute Guided Meditation.