Future - Has humanity reached ‘peak intelligence’? You may not have noticed, but we are living in an intellectual golden age. 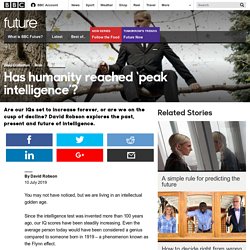 Since the intelligence test was invented more than 100 years ago, our IQ scores have been steadily increasing. Even the average person today would have been considered a genius compared to someone born in 1919 – a phenomenon known as the Flynn effect. Maslow didn't make the pyramid that changed management history — Quartz at Work. By mollycoddling our children, we're fuelling mental illness in teenagers. We talk incessantly about how to make children more “resilient”, but whatever we’re doing, it’s not working. 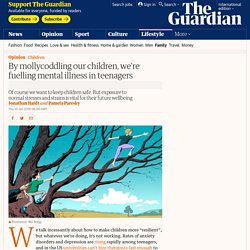 Rates of anxiety disorders and depression are rising rapidly among teenagers, and in the US universities can’t hire therapists fast enough to keep up with the demand. What are we doing wrong? Neoliberalism Is Taking a Steep Toll on an Entire Generation's Mental Health: Study. Photo Credit: pathdoc / Shutterstock Are you a millennial prone to self-criticism? 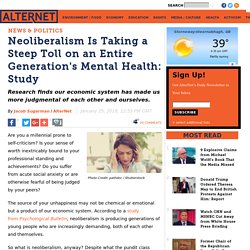 Is your sense of worth inextricably bound to your professional standing and achievements? How to Stay Sane if Trump is Driving You Insane: Advice From a Therapist. “I feel like I’ve lost faith in humanity, in our country, in myself,” a client told me recently. 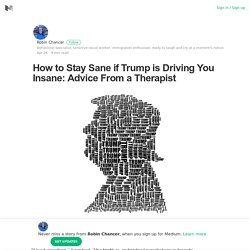 “Is this depression, or is this the election?” “Good question,” I replied. The truth is, individual psychology is hugely influenced by political realities. Why Facts Don’t Change Our Minds. Why Liberals Are More Intelligent Than Conservatives. The Psychology Behind Donald Trump's Unwavering Support. The cult of ignorance in the United States: Anti-intellectualism and the "dumbing down" of America.

© reddit.com There is a growing and disturbing trend of anti-intellectual elitism in American culture. 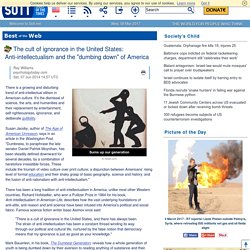 It's the dismissal of science, the arts, and humanities and their replacement by entertainment, self-righteousness, ignorance, and deliberate gullibility. Susan Jacoby, author of The Age of American Unreason, says in an article in the Washington Post, "Dumbness, to paraphrase the late senator Daniel Patrick Moynihan, has been steadily defined downward for several decades, by a combination of heretofore irresistible forces.

These include the triumph of video culture over print culture; a disjunction between Americans' rising level of formal education and their shaky grasp of basic geography, science and history; and the fusion of anti-rationalism with anti-intellectualism. " A Deep Dive Into the Blockbuster Study That Called Into Doubt a Lot of Psych Research. Yesterday, Science published a blockbuster article about the state of, well, science. 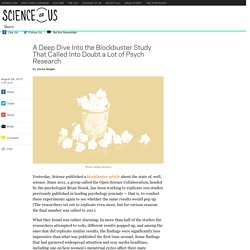 Since 2011, a group called the Open Science Collaboration, headed by the psychologist Brian Nosek, has been working to replicate 100 studies previously published in leading psychology journals — that is, to conduct these experiments again to see whether the same results would pop up. (The researchers set out to replicate even more, but for various reasons the final number was culled to 100.) What they found was rather alarming: In more than half of the studies the researchers attempted to redo, different results popped up, and among the ones that did replicate similar results, the findings were significantly less impressive than what was published the first time around. To understand why all this matters — and what it says about the exciting new science findings flashing into your news feeds seemingly every day — requires a bit of background.

Here’s an explainer. Overstated effects? P-hacking? Yes. Instability-in-Chief. ​Psychiatrists are granted the authority to commit patients involuntarily to treatment based on three guiding principles: harm to self, harm to others, and evidence of significant mental deterioration to the extent that the individual is unable to practice self care in his/her own best interest. 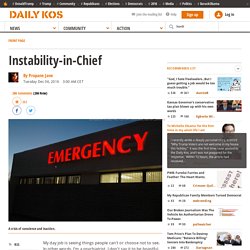 While the former risks can be ascertained by explicit threats made by the patient, the latter evidence is often gleaned from self-reported or eyewitness accounts of the patient’s concerning behaviors. To date, I have personally witnessed Donald Trump make threats against not just individuals but entire sovereign nations, and heard eyewitness accounts from individuals who report victimization at his hands. The Breakdown of Empathy and the Political Right in America. Photo Credit: a katz/Shutterstock In 1978, developmental psychologist Edward Tronick and his colleagues published a paper in the Journal of the American Academy of Child Psychiatry that demonstrated the psychological importance of the earliest interactions between mothers and babies. 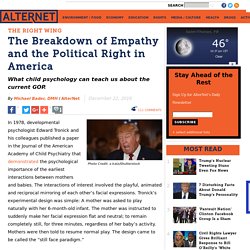 13 Cognitive Biases That Really Screw Things Up For You. The human brain is a natural wonder. 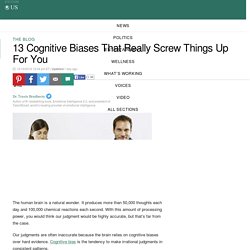 It produces more than 50,000 thoughts each day and 100,000 chemical reactions each second. The High Price of Materialism. The Demoralized Mind. © Robin Heighway-Bury/Alamy By John Schumaker / newint.org Our descent into the Age of Depression seems unstoppable. 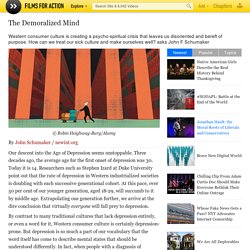 Three decades ago, the average age for the first onset of depression was 30. Today it is 14. Researchers such as Stephen Izard at Duke University point out that the rate of depression in Western industrialized societies is doubling with each successive generational cohort. By contrast to many traditional cultures that lack depression entirely, or even a word for it, Western consumer culture is certainly depression-prone. Contributing to the confusion is the equally insidious epidemic of demoralization that also afflicts modern culture. Existential disorder In the past, our understanding of demoralization was limited to specific extreme situations, such as debilitating physical injury, terminal illness, prisoner-of-war camps, or anti-morale military tactics. Moral net Consumption itself is a flawed motivational platform for a society.

Culture proofing. Jonathan Haidt: the Moral Roots of Liberals and Conservatives. Your Mental Health is More Important Than Your Grades. Caring for Your Introvert. A Silent Epidemic: The Mental Health Crisis In Our Schools. Psychology History. Compiled by Kathy Jo Hall (May 1997) Biography Theory Time Line Bibliography Carl R. Rogers is known as the father of client-centered therapy. Throughout his career he dedicated himself to humanistic psychology and is well known for his theory of personality development.

He began developing his humanistic concept while working with abused children. Dr. Rogers is a leading figure within psychotherapy and developed a breaking theory of personality development. 10 Qualities of People With High Emotional Intelligence. The Six Most Interesting Psychology Papers of 2015.