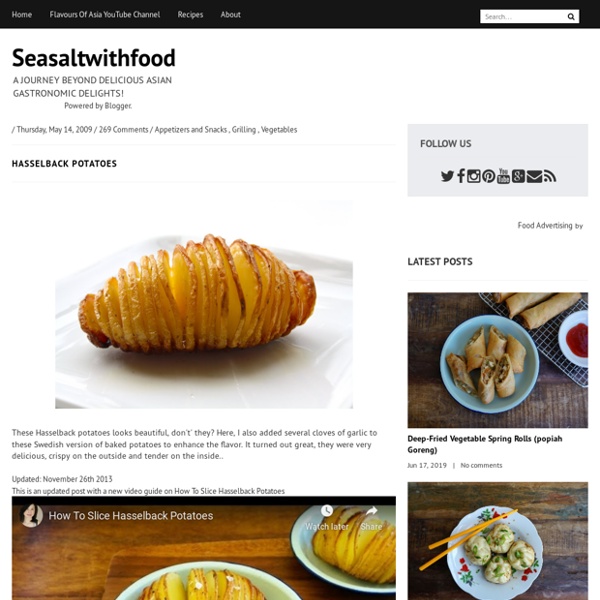 These Hasselback potatoes looks beautiful, don't' they? Here, I also added several cloves of garlic to these Swedish version of baked potatoes to enhance the flavor. It turned out great, they were very delicious, crispy on the outside and tender on the inside.. Updated: November 26th 2013 This is an updated post with a new video guide on How To Slice Hasselback Potatoes Hasselback Potatoes (Printable Recipe) Ingredients 6 Medium Size Potatoes 2 - 3 Cloves Garlic, thinly sliced 2 Tbsp Olive Oil 30 g Butter Maldon Sea Salt Freshly Ground Black Pepper Method Preheat the oven to 220˚C (425˚F). Arrange the potatoes in a baking tray and insert the garlic in between the slits. Bake the potatoes for about 40 minutes or until the potatoes turn crispy and the flesh is soft.

How to make cinnamon roll pancakes. The case of the disappearing candy corn. SCORE 76 I think I found your problem. encyclopedia of spices Spice Advice – how to make the most of spices, which spices to use with particular foods, when to add them, grinding, storage and more. Herbs and Spices Fight Disease — Most of us look at spices as a way to perk up the plate but are you aware of their potential to fight disease? Look here for some recent findings. All about Vanilla – and then some… history, curing, varieties, vanilla extract, essence, powder – even vanilla salt.

The Pastry Affair - Home - Garlic Parmesan Pull-Apart Bread I once made the driest pancake in the world. I can see you sitting at home, staring at your computer screen, and scoffing at my bold statement. Driest pancake in the world? Yeah, right. How would you even know? Oven Pancake with Apples & Bacon Pancakes is one of the very favorite family foods in Sweden - and while it's usually thin, Swedish pancakes that's on the menu, sometimes it's much more convenient to make a thick oven-baked pancake. And this is great too! It's usually more savory than the thin kind (which is often served with jam and whipped cream) and I like to put apples and bacon in mine. However, I like to eat it with something sweet - jam, or why not maple syrup? It's delicious! Oven Pancake with Apples & BaconServes 4

Baked Potatoes with Assorted Toppings For the black-bean topping variation, top the potatoes with the yogurt and scallions after removing them from the oven. The sour-cream version requires no reheating whatsoever. Photography: Alphs Smoot Martha Stewart Living Recipes Con la tecnología de Traductor Stay Connected search our site cobbler baked in jars I made these for the Seattle Bake Sale for Share Our Strength organized by Frantic Foodie (thanks Keren!). I had so much fun making pies in jars that I figured this was the perfect opportunity to bake something else in jars. This time I used half-pint wide mouth jars, a nice size for a bake sale. (Half pint jars washed and drying.) I used the blueberry cobbler recipe from Baking Illustrated. I was making 24 portions so the first time I tried to divide each recipe between 8 jars (making three total recipes worth).

Irish Car Bomb Cupcakes Recipe As I mentioned on Friday, I have been doing some experimentation with the beer and chocolate combination. The Guinness-chocolate ice cream that I made totally kicked butt, so I couldn’t wait to see how I liked beer and chocolate in my cake. The answer? I like it, a whole heck of a lot. This was my first time doing Guinness-chocolate cakes, and I was totally optimistic that I would love it, and I was definitely right. These cupcakes are fashioned after the popular drink that consists of a shot of Baileys Irish Cream and Irish whiskey dropped into a pint of Guinness. No Knead Bread: so easy a 4-yr old can make it! Monday, September 10, 2007 No Knead Bread: so easy a 4-yr old can make it! It’s been almost a year since NY Times unveiled the secret to the revolutionary No-Knead Bread. And while fads come and go, this certainly is a recipe that has transcended the fickleness of foodies. It’s time to revisit the bread…. as many of us have been brainwashed by this summer’s ice cream!