Microplastics Found in Fruit and Vegetables for the First Time. Lettuce is Plastic Food. The Terrifying Truth About Avocados. The Key Foods to Eat Organic. If You Open a Watermelon and See This, Throw It Out! Is There BEETLE WAX On Your PRODUCE? USDA Certified Organic's Dirty Little Secret: Neotame. By Barbara H. 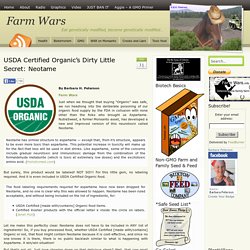 Peterson Farm Wars. Strawberries contaminated with pesticides and poisonous gases. (NaturalHealth365) The U.S. grows an estimated 3 billion+ pounds of strawberries each year, with California producing over 90 percent of them. 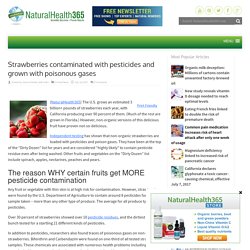 (Much of the rest are grown in Florida.) However, non-organic versions of this delicious fruit have proven not-so-delicious. Independent testing has shown that non-organic strawberries are loaded with pesticides and poison gases. They have been at the top of the “Dirty Dozen” list for years and are considered “highly likely” to contain pesticide residue even after being washed. Dude, That Isn’t Wax On Your Apple! Fancy yourself a vegetarian or vegan? 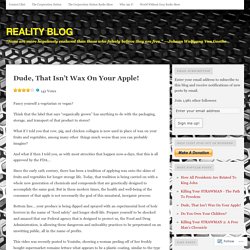 You Should Never Ever Eat Watermelons Like This, Absolutely NEVER. Sorry Hipsters, That Organic Kale Is a Genetically Modified Food. Bananas Are Naturally Radioactive. Are You Eating Poisoned Strawberries? The Truth About Chemical Residue On Fruit And Vegetables. Photo credit: bigstock.com Most people would be shocked to know just how many chemicals can be found on the fruit and vegetables they eat every day. 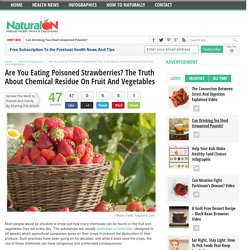 The substances are usually pesticides or herbicides (designed to kill weeds) which agricultural companies spray on their crops to prevent the destruction of their produce. Such practices have been going on for decades, and while it does save the crops, the use of these chemicals can have dangerous and unintended consequences. Residue remains on the fruit and vegetables and can be ingested by people, leading to all types of health complications. In this article we’ll explore which chemicals are the most dangerous, which fruits and vegetables are most at risk of contamination, and practical steps you can take to protect yourself and eat healthy. Beware Of Dangerous Bleached Garlic. Photo credit: bigstock.com If you love garlic and have been buying organic garlic for both its taste and health benefits, you are not alone! 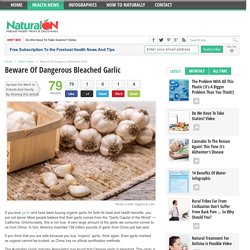 Most people believe that their garlic comes from the “Garlic Capital of the World” — California. Unfortunately, this is not true. A very large amount of the garlic we consume comes to us from China. In fact, America imported 138 million pounds of garlic from China just last year. Imported organics, particularly from China, cloud “pesticide-free” image. Organic farmers go to some lengths to avoid using synthetic pesticides on their products, and are required (at least in the United States, Canada and parts of Europe) to avoid a large number of these chemicals. 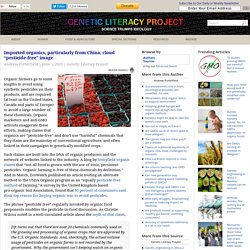 Organic marketers and anti-GMO activists exaggerate these efforts, making claims that organics are “pesticide-free” and don’t use “harmful” chemicals that they claim are the mainstay of conventional agriculture, and often linked in their campaigns to genetically modified crops. Such claims are built into the DNA of organic producers and the network of websites linked to the industry. A blog by Stonyfield organic claims that “not all food is grown with the use of toxic, persistent pesticides. You Are Most Likely Consuming Bleached And Chemical Laden Garlic From China. Here Is How To Spot It. By Anya Vien Did you know that over 80 percent of the garlic sold worldwide comes from China? 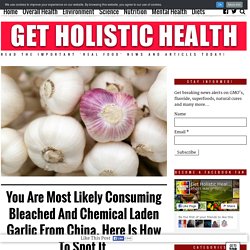 In fact, a large amount of garlic we consume here in America is from China. Check Out Which Top Foods Are Sprayed With Roundup Just Days Before You Buy Them. Photo credit: bigstock.com If you think that organic produce is a waste of money, you might be consuming a huge amount of toxins — probably many more than you realize. 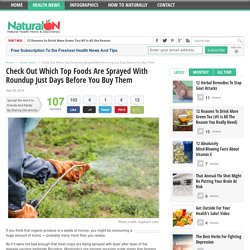 As if it were not bad enough that most crops are being sprayed with layer after layer of the disease-causing herbicide Roundup, Monsanto’s pre-harvest spraying guide states that farmers should spray all crops heavily three days prior to harvest. They aren’t referring to only GMO crops; they are talking about all crops on which Roundup is being used. Watch This Before Eating An Apple Again. Are Your Almonds Truly Raw? This may or may not come as a surprise, but if you’re buying raw almonds grown in the United States, they’re not actually raw. 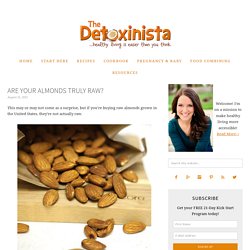 Even if they’re labeled “raw.” It has been brought to my attention that some people still aren’t aware of this fact, so I thought it might be a good idea to revisit the topic today. Effective September 2007, the USDA ordered all almond growers to “sterilize” almonds in one of several ways: heat them using steam, irradiate them using a controversial ionization process, roast or blanch them, or treat them with propylene oxide (PPO).PPO is a known carcinogen, and most countries, including the EU, have banned imported nuts treated with PPO. The chemical is so nasty that it’s even been banned by both the National Hot Rod and American Motorcycle Racing Associations, where it had been used as a fuel additive before it was deemed too dangerous.The new rule created deceptive labeling.

Frustrating, isn’t it? I was stocked up for at least 6 months. Food borne illnesses on the rise. (NaturalHealth365) You’re careful about food preparation and storage; plus you always cook meats at safe temperatures. 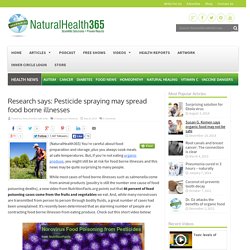 But, if you’re not eating organic produce, you might still be at risk for food borne illnesses and this news may be quite surprising to many people. While most cases of food borne illnesses such as salmonella come from animal products (poultry is still the number one cause of food poisoning deaths), a new video from NutritionFacts.org points out that 46 percent of food poisoning cases come from the fruits and vegetables we eat. Inside the Food Industry: Ingredients, By Any Other Name, Just As Sweet? Aaron DykesActivist Post What we eat is a more interesting subject that it might first appear. Behind the labels are many troubling issues… and GMOs are just the tip of the iceberg. The London Guardian carried this interest piece revealing how so much of our foods – even the most natural in appearance – are engineered, manufactured and packaged with invisible processing ‘ingredients’ derived from sophisticated lab processes.

Now, as the food manufacturing industry is keeping up with consumer demand, scary sounding and artificial looking ingredients are increasingly fading from food packages. Here are just a few segments of Joanna Blythman’s piece, Inside the food industry: the surprising truth about what you eat, well worth a full read for its peak inside your grocery store, food cabinet and assortment of convenience foods: This Little Girl's Potato Experiment Will Change The Way You Think About Food! 80 percent of non-organic U.S. apples contain harmful chemical that is banned in Europe.

(NaturalNews) It's no secret that non-organic apples contain pesticides, but new information demonstrates that upwards of 80 percent of them may also contain diphenylamine (DPA), a chemical banned in Europe. DPA, which is regulated as a pesticide, is said to keep produce from turning dark colors while in storage. Although banned overseas, such apples are still found in the United States. In fact, the most common pesticide on conventionally grown U.S. apples is DPA.

In 2012, the European Food Safety Authority, which is responsible for assessing pesticide risk, determined that manufacturers were unable to prove that DPA did not pose human health risks. Study Identifies Which Fruits and Veggies Have the Most Pesticide Residue. 10 Reasons to Avoid Soy At All Costs. In the twentieth century the soybean was one of the two major new crops introduced into the U.S.

(the other crop being canola). It has now become the number one export crop and one of the second largest crops for cash sales. Most soybean products are processed into oil (shortening, margarine, cooking oil & salad dressings) and meal. For example, you may have noticed (or may start noticing) the popular ingredient “Soy Lecithin” in many of your foods and household items.

The untold fruit and vegetable scandal. Mon. Dec. 16, 2013 by Jonathan Landsman (NaturalHealth365) Sadly forgotten, but true, most fruits and vegetables, grown decades ago, were much more nutrient-dense. China’s ‘organic label’ is a fraud. Mon. Dec. 23, 2013 by Jonathan Landsman. Vegetarians tricked by restaurants across the nation as they eat dead animals by accident. Most 'extra virgin' olive oil bottles are actually cheaper mix. More than two of every three bottles labeled imported extra virgin olive oil are either a cheaper grade of olive oil or adulterated with another type of oil, a University of California at Davis study found. Top-selling brands including Bertolli, Filippo Berio, Carapelli, Pompeiian, Colavita, Mazola and Carapelli all had bottles that flunked the test -- containing instead a cheaper virgin olive oil, the study by the university's Olive Center found. Even a brand carrying the name of TV host Rachael Ray -- who frequently touts her supposedly extra virgin olive oil -- flunked the testing on two of three samples.

GM foods cause rapid rise in allergies and cancer. Thu. Confirmed: DNA From Genetically Modified Crops Are Transferred Into Humans Who Eat Them. EWG's 2013 Shopper's Guide to Pesticides in Produce™ EWG analyzed pesticide residue testing data from the U.S. Department of Agriculture and Food and Drug Administration to come up with rankings for these popular fresh produce items. All 48 foods are listed below from worst to best (lower numbers = more pesticides) Beware of red dyes in oranges. Mon. Mar. 24, 2014 by Linda Kordich.