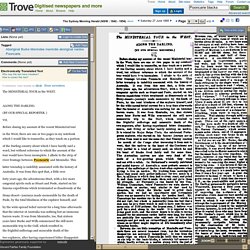 Before closing my aocount of the recent Ministerial tour in the West, there are one or two pages in my notebook which I would like to transcribe, as they touch on a portion of the Darling country about which I have hardly said a word, but without reference to which the account of the tour would have been incomplete. I allude to the strip of river frontage between Pooncarie and Menindie. This latter township is indelibly associated with the history of Australia. Forty years ago, the adventurous Sturt, with a few more congenial spirits such as Stuart and Poole, started on his famous expeditions which terminated so disastrously at the Stony-desert—journeys made memorable by the death of Poole, by the total blindness of the explorer himself, and by the wide-spread belief current for a long time afterwards that the interior ot Australia was nothing but an immense barren waste. 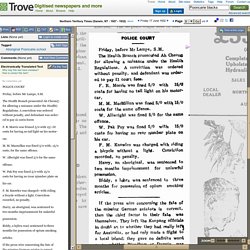 The Health Branch prosecuted Ah Cheon© for allowing a nuisance under the Health) Regulations. A conviction was ordered without penalty, and defendant was order- ed to pay £1 corin feesw F. R. Morris was firmed 5/0 with 15/<H costa for having no tail light on his motor- 28 Oct 1930 - EPIDEMIC AT BLACKS' CAMP Two Dead, Six III BROKE... 18 Oct 1893 - A BLACKFELLOW'S REVANGE. ! 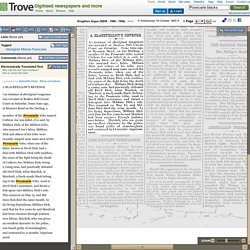 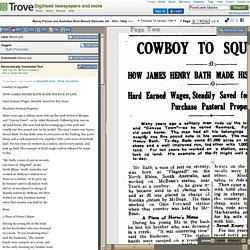 03 Sep 1881 - POONCARIE AND VICINITY, DALLING RIVEE, NEW SOUTH... 19 Nov 1929 - CHRISTMAS CHEER FOR BLACKS. 30 Dec 1922 - AN A[?]RIGINAL'S DEATH FOUND IN POONCARIE RESERVE. George Brodie, of Pooncarie, reported to Constable Taylor on December 25 that George Jackson, an aboriginal, had died on the reserve at Pooncarie. 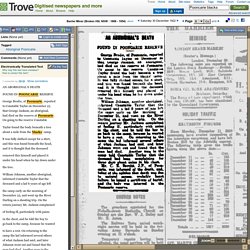 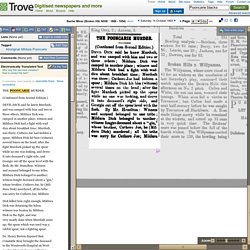 DEVIL DICK said he knew Murdoch, and was camped with him and two or three others; Mildura Dick was camped in another place; witness and Mildura Dick had a fight with wad dies about breakfast time; Murdoch was there; Cuthero Joe had hidden a spear; Mildura Dick hit him (witness) several times on the head; after the fight Murdoch picked up the spear while no one was looking, and drove it into deceased's right side, and Georgie cut off the spear level with the flesh. By Mr. Hamilton: Witness and accused belonged to one tribe; Mildura Dick belonged to another; witness fought deceased about a "gin," whose brother, Cuthero Joe, he (Mil- dura Dick) murdered; all his tribe was sorry for Cuthero Joe; Mildura Dick killed him right enough; Mildura Dick was detaining the lubra; witness was beaten by Mildura Dick in the fight, and was very nearly done when Murdoch came up; the spear which was used was a rabbit spear, not a fighting spear. 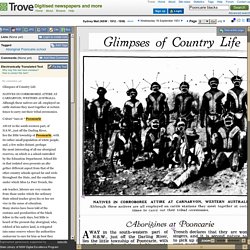 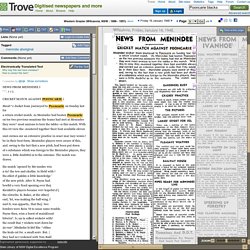 As Menindee hod beaten Pooncarie on toe two previous occasions the teams had met at Menindee they were* most anxious to turn the tables »n this match. With this irt view the- mustered together their bost available eleven unci curnea our an extensive practice in oraer mar iney wouio ! 11 Aug 1930 - SCHOOL FOR ABORIGINES OPENED AT POONCARIE. 26 Sep 1893 - THE POONCARIE AFFRAY. 07 Jun 1909 - In Far Pooncarie! In Far Fooncarie ! 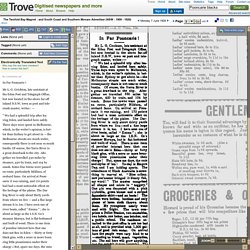 Mr L. G. Griohton, late assistant at tho Edon Post and Tologmph Offise, but now located in tho above far-off inland N.S.W, town as post and tele- crank master, writes : — " Wo had a splendid trip after lea ving Eden, and landed here safely. Three days were spent in Melbourne, which, in the writer's opinion, is bet- tor than Sydney to get about in — the Melbourne streots are much wider, consequently there is not near so muoh bnstlo.

Flannolette skirt— and no boots I The othors were hatless, bootless and only pieces of loose oloth thrown abont them. At all, and ie provided with 1,200 gal lons of good rain water. 14 Oct 1893 - THE POONCARIE MURDER CASE. "Swearing in" Some Bl... 21 Dec 1901 - GROUP OF BLACKS AT POONCARIE. 11 Jul 1931 - FLOOD WATERS FROM DARLING ISOLATE POONCARIE BLACKS. Unmapping the End of the World. Awe and anger at Lake Mungo. Ever been to Lake Mungo, down from Broken Hill and up from Mildura? 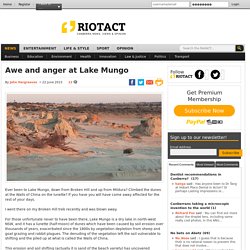 Climbed the dunes at the Walls of China on the lunette? If you have you will have come away affected for the rest of your days. I went there on my Broken Hill trek recently and was blown away. For those unfortunate never to have been there, Lake Mungo is a dry lake in north-west NSW, and it has a lunette (half-moon) of dunes which have been caused by soil erosion over thousands of years, exacerbated since the 1800s by vegetation depletion from sheep and goat grazing and rabbit plagues. The denuding of the vegetation left the soil vulnerable to shifting and the piled up at what is called the Walls of China. This erosion and soil shifting (actually it is sand of the beach variety) has uncovered evidence of human habitation dating back 20,000 to 30,000 years. This is the place where the skull of Mungo Lady and the skeleton of Mungo Man were discovered. Giant Lake Mungo was 20 per cent bigger than we thought, say researchers. Sand dunes near Lake Mungo: Blue markers are where stone tools were found, green markers where animal food remains were found.

Photo: La Trobe University The Aboriginal people who called the arid area around Lake Mungo home some 24,000 years ago were likely accomplished inland seafarers living in what is now desert country. Results of an international study has revealed that the iconic Lake Mungo, 90 kilometres north-east of Mildura, was actually a mega-lake almost 20 per cent bigger than previously thought. After dating the sediment layers found in the nearby sand dunes, researchers established that the lake's high water mark was five metres higher than realised. Inquests Intro. Inquests in Western and some of Central New South Wales This material has been compiled by Rusheen Craig and is copyright. It has been posted for private study only. No copies may be made in any format except for private study, without written permission from the copyright holder.

Inquests were held to investigate the manner and cause of death. It was necessary to hold an inquest when the deceased person was not identified, when the cause of death was not determined, when the person died as a result of homicide, and when a person died in or attempting to escape from custody. The records of these inquests are part of the Archives Resources Kit which is held by the community access points such as libraries.

Inquests were also reported in some years in the Government Gazettes. This does not mean that the Gazette always gives the correct information. General Collection B 71654/1-29. 05 Sep 1933 - THE FIRST INHABITANTS. 28 Feb 1933 - Aborigines At Pooncarie. 19 Oct 1933 - Chiefly In Our own States. Chiefly In Our Own States NARRACOORTE SHOW —The Committee which ran the rewnt successful agricultural exhibition. 10 Apr 1933 - "The Advocate" Daily Serial Barrakee Mystery COP... "The Advocate" Daily Serial-' ' ' ' Barrakee Mystery By ARTHUR W. UPFIELD. 18 Sep 1948 - Menindee Aboriginal Station Transfer To Lake Car... 02 Oct 1933 - BUILDING OF TOWNSHIP Home For Blacks Near Menind... Home For Blacks Near Menindie A new canvas town has sprung up on the banks of the River Darling, eight miles from Menindie, towards Albemarle Station.

Ancestral remains of 15-year-old Aboriginal girl returned to Tasmania from Berlin, Germany. Updated. 18 Aug 1893 - A TRIBE OF WILD BLACKS. WENTWORTH, THURSDAY. It has just been reported to the Tareena police that Fred. Williams, Ned M'Gregor, Harry Mitchell, all half-castes, and a half-caste boy, Willie, who have been dog trapping in the back country of Lake Victoria station, came upon a tribe of 30 wild blacks at a place called Cane Grass. It appears that a blackfellow named Nania escaped to the back country some 30 years ago, and it has. Www.aiatsis.gov.au/_files/archive/removeprotect/23708.pdf.

Www.aiatsis.gov.au/_files/asp/reference/StyleGuide.pdf. Mildura Weekly by Mildura Weekly. 22 May 1931 - TEACHING ABORIGINES OBSERVATIONS OF TEACHER AT P. Insights, into the life and customs of the aborigines at the Pooucarie abori- gines' reserve, with special references to the natives' habits and peculiarities in school were related by Miss Le Poer Trench, teacher in charge of the aborigines' school at that bush centre, who is at present holidaying in Broken Hill, in an interview with a "Barrier Miner" reporter this morning. Living on Aboriginal reserves and stations. The Aboriginal People, Parliament and "protection" in New South Wales, 1856-1916 - Anna Doukakis.

Pooncarie Mission. The site known as the Old Pooncarie Mission is located eight kilometres west of Pooncarie Township on the Darling River. The mission site is Western Lands Leasehold and is bounded on the western and southern sides by the Darling River. The property forms part of the Darling River floodplain and is subject to occasional flooding. Local History: A Lucrative Niche Market. The key to selling your book is the cover letter. List of Aboriginal Schools, 1876-1979. Www.community.nsw.gov.au/DOCSWR/_assets/main/documents/connectkin_guide.pdf. Parish and historical maps - Land and Property Information. File:Nanya Tribe 1894.jpg. Nanya. Appendix 2 Chronology of Significant Events.