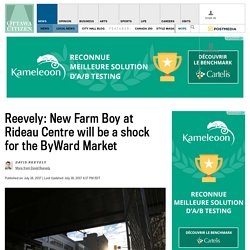 “We do have a deal with Farm Boy to open before the end of this year. We’re super-excited about the opportunity to do business with a very successful and well-regarded local retailer,” said Cindy VanBuskirk, the Rideau Centre’s general manager. Farm Boy began in Cornwall more than 30 years ago but it’s now anchored in Ottawa and has been expanding rapidly over the last five years or so, opening stores in London, Kitchener and Whitby. The details of the store plans are Farm Boy’s to share but customers shouldn’t expect a large suburban-style supermarket, VanBuskirk said.

The company has been experimenting with different templates for its stores, trying out more prepared foods and space for eating in instead of only carrying out. Would that be a bad thing? Dreevely@postmedia.comtwitter.com/davidreevely. Front Page - Ottawa Insights. VeloGo Bike Share. Know your rights: Door-to-door sales require licence from the city. Next time someone bangs on your door asking you to buy something, ask to see a licence. 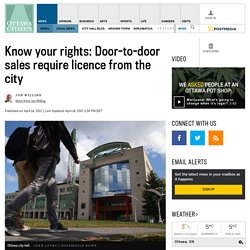 The City of Ottawa has a bylaw that requires anyone engaging in door-to-door sales to buy a permit from the city before pounding the pavement. An “itinerant seller” licence costs between $217 and $553, depending on the type of licence and how long it’s needed. Urban development, city planning, population growth and the future of Ottawa. It began life 190 years ago as Bytown, founded to house labourers who had been recruited to build the Rideau Canal. 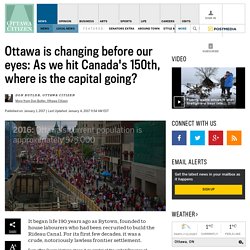 For its first few decades, it was a crude, notoriously lawless frontier settlement. Even after Queen Victoria chose it as capital of the united Province of Canada in 1857, the renamed city of Ottawa lacked basic municipal services such as paved streets, piped water and sewers. Lumber, fire and politics shaped its destiny, but not always advantageously. When Allan Gotlieb arrived in 1957 to take up a job at External Affairs, the future Canadian ambassador to the United States was appalled. “An unkempt, decaying village,” he sputtered in his 2006 diplomatic memoir, The Washington Diaries. Meet the voice you hear every time you ride Ottawa public transit. As an actor, Julian Doucet has done everything from performing in Shakespeare plays to a role in a Budweiser commercial. 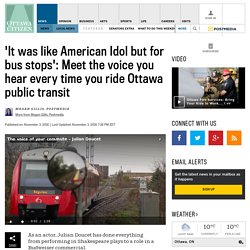 But to the Ottawa native’s biggest audience, he is literally invisible. Doucet’s voice calls the stops on city buses, the O-Train Trillium Line and, starting in 2018, the brand-new Confederation Line from Tunney’s Pasture to Blair Road. So the Citizen rode the rails with Doucet for a chat between the O-Train’s Greenboro and Bayview stations.

Your audience is about to grow – how do you feel about being the voice of the new light-rail line? I think it’s pretty exciting. Story. Once-in-a-decade dryness: Rainless Ontario verges into drought, and there’s no end in sight Ontario has a problem: It has barely rained for three months. 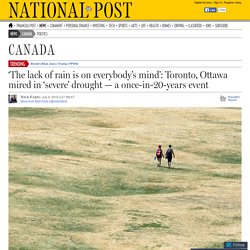 Much of the province has laboured through an aberrantly dry spring and summer, marked by rainfall 100 mm below normal in some areas from April to June. “These conditions occur once every 10 years. They’re considered extremely low precipitation for this time period,” said agroclimate specialist Trevor Hadwen. “I don’t see a whole lot of major relief anytime soon.” Read more… Debra Pretty-Straathof was driving through Lanark County Wednesday afternoon, passing burnt fields and brown grass along a stretch of rural Ottawa farmland, when a single speck of rain fell on her windshield. Revitalization plan for ByWard, Parkdale markets moves forward - Ottawa.

Councillors on Ottawa's finance and economic development committee hope turning over Ottawa's ByWard and Parkdale markets to a new not-for-profit corporation will inject new life into the markets. 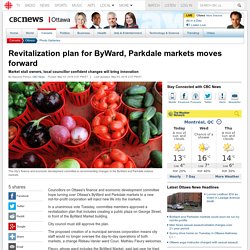 In a unanimous vote Tuesday, committee members approved a revitalization plan that includes creating a public plaza on George Street, in front of the ByWard Market building. City council must still approve the plan. The proposed creation of a municipal services corporation means city staff would no longer oversee the day-to-day operations of both markets, a change Rideau-Vanier ward Coun. Mathieu Fleury welcomes. Fleury, whose ward includes the ByWard Market, said last year he tried to launch a Thursday night market, only to discover the process required six weeks before approval could be given. "We have great staff who are currently managing the markets, but they're restricted by city bylaws. Corporation's board would report to city "It'll get rid of some of the red tape. Hourly Forecast: Ottawa. Monopolatte. DRAW THE LINE. Ottawa Asian Heritage Month Society2012. Events Organized by Ottawa Asian Heritage Month Society Event Location AbbreviationsLAC: Library and Archives Canada (395 Wellington St.) 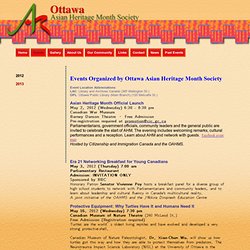 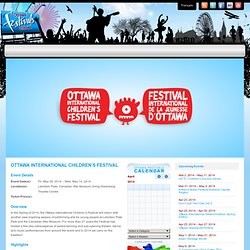 For more than 27 years the Festival has hosted a five-day extravaganza of award-winning and eye-opening theatre, dance and music performances from around the world and in 2014 we carry on the tradition! Highlights Feature Shows from Canada and around the world! Event Information. Reward program. Does VIA have a points program for frequent travelers? 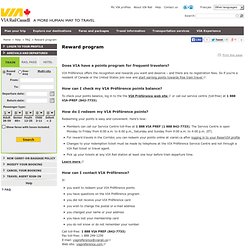 VIA Préférence offers the recognition and rewards you want and deserve – and there are no registration fees. So if you're a resident of Canada or the United States join now and start earning points towards free train travel How can I check my VIA Préférence points balance? To check your points balance, log in to the the VIA Préférence web site. Indie Coffee Passport Ottawa. Yummy Sushi. Ottawa Public Library / Bibliothèque publique d'Ottawa.