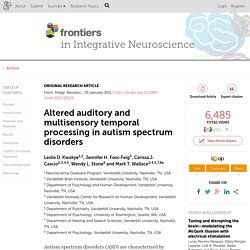 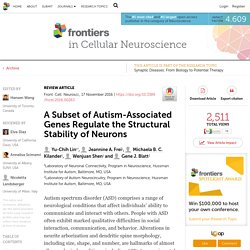 ASD occurs in 1:68 individuals in the United States (Baio, 2014) and complex genetic interactions appear responsible for a high degree of heterogeneity of the clinical symptoms in ASD. Individuals with ASD often co-express other comorbidities including epilepsy which often complicates diagnosis and treatment. A Translational Framework of Educational Neuroscience in Learning Disorders. Introduction Educational neuroscience (EN), a discipline situated between neuroscientific and psychological research, has remained rather distant from educational research (Bruer, 2016). 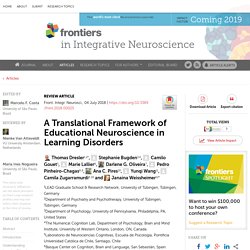 One often claimed problem is its scarce practical application to real-world education, leaving neuroscientists virtually incapable of helping educators (Bowers, 2016). Cognitive science has been proposed as the necessary bridge from neuroscience to education (Bruer, 1997), a perspective that has produced some promising educationally oriented findings (Sigman et al., 2014). 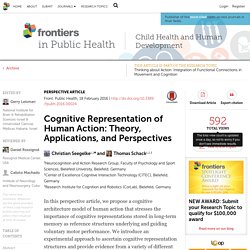 Important stages in evolution are mainly based on the establishment of new functional links between the motor system, related memory structures, and the perception of biological systems. Furthermore, motor actions – such as dance or sports – have always been an important element in all human cultures. Stated in a more dramatic language: “from the motor chauvinist’s point of view the entire purpose of the human brain is to produce movement … [and] all sensory and cognitive processes may be viewed as inputs that determine future motor outputs” [Ref. (1), p. 487]. Consequently, understanding how we plan and control our bodily actions (i.e., the topic of motor control research) is not only of theoretical importance but also has large and diverse practical relevance. Cognitive Representation of Action: A Theoretical Framework Figure 1. Diminished N1 Auditory Evoked Potentials to Oddball Stimuli in Misophonia Patients. Evidence for Brainstem Contributions to Autism Spectrum Disorders. 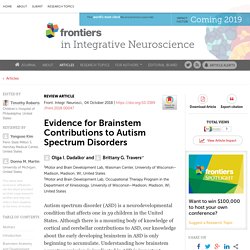 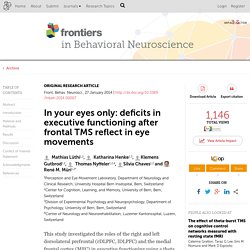 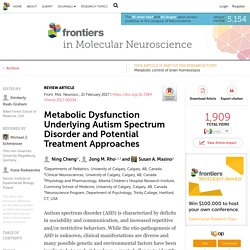 The term “spectrum” refers to the wide range of symptoms and levels of impairment that can occur in individuals with ASD. Multimodal Diffusion-MRI and MEG Assessment of Auditory and Language System Development in Autism Spectrum Disorder. Introduction The etiology or, indeed, etiologies of autism spectrum disorder (ASD) is currently unknown. 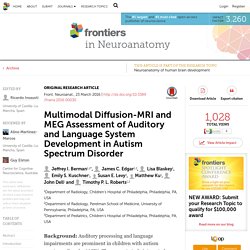 It is hypothesized that alterations to brain structure and function contribute to the clinical symptoms common to ASD. Neurofeedback for Tinnitus Treatment – Review and Current Concepts. Introduction Subjective tinnitus has been described as the constant perception of an auditory sensation that does not correlate to any external acoustic stimulus (Stouffer and Tyler, 1990). 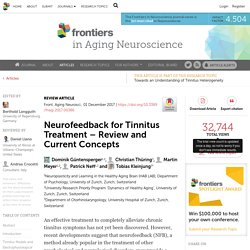 It can be perceived as either pitch or noise-like sound and its perception may be unilateral, bilateral or spread out in the whole head (De Ridder et al., 2014b). In industrialized countries, roughly 10% of the population is affected by this stressful condition and many people suffer from sleeping or concentration problems, affected social interactions and psychological distress that can also lead to severe depression or anxiety impairments (Heller, 2003; Henry et al., 2005). The relatively large percentage of affected people, recently developed neuropsychological models, and the fact that, to date, no satisfactory potent treatment has been discovered may explain the increasing interest in tinnitus research. Parent Report and Actigraphically Defined Sleep in Children with and without Developmental Coordination Disorder; Links with Fatigue and Sleepiness. Introduction Developmental coordination disorder (DCD) is recognized by the American Psychiatric Association as a significant difficulty in the learning of motor skill in the absence of sensory, intellectual or neurological impairment (1). 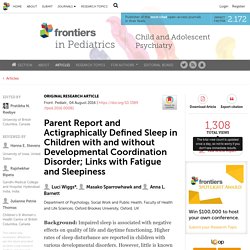 The motor difficulties are apparent from early in childhood and often persist into adolescence and adulthood (2). These have an impact on everyday self-care activities, such as eating and dressing as well as leisure activities, education, and employment. Varying prevalence rates for DCD have been reported, due to the use of different assessment methods and cut-off points (1, 3). However, a population study in the UK strictly based on criteria from the DSM (4) reported a prevalence of almost 2% in primary school children (5). Parasympathetic functions in children with sensory processing disorder. Approximately 5–10% of the non-disabled population and 30% of children with disabilities experience atypical responses to sensory stimuli that interfere with their ability to fully participate in home, school, and community activities (Baranek, 1998 ; Ahn et al., 2004 ).

In this paper, we use the term sensory modulation dysfunction (SMD) to refer to patterns of atypical responses to typical levels of sensation Lane (Lane, 2002 ). SMD is a proposed subtype of larger problem sometimes termed “Sensory Processing Disorder” or SPD (Miller et al., 2007 ). SPD is thought to occur when sensory information is perceived and interpreted in a disorganized way so that the persons ability to use sensory information to act and interact with their environment is impaired (Miller, 2006 ).

Perspectives on sensory processing disorder: a call for translational research. This article explores the convergence of two fields: a clinical field originally known as sensory integration, and a branch of neuroscience that also uses the term sensory integration to describe specific studies of sensation. Clinically, the term sensory integration was first used by Ayres (1966b , 1972b ) to identify a field of study related to individuals with atypical responses to sensory stimulation. The clinical condition is now known as sensory processing disorder (SPD). In neuroscience, early sensory system research emphasized unisensory studies.

With the advent of technology a new branch of neuroscience research focuses on multisensory integration (MSI), which studies the interaction of two or more sensory modalities. Early neuroscience research on the interaction of individual sensory systems provided a foundation for Ayres to develop clinical hypotheses about the disorder and the treatment. Clinical Field Related to Sensory Integration. Physical and Mental Health of Children with Developmental Coordination Disorder. Developmental Coordination Disorder Developmental coordination disorder (DCD) is defined as a neurodevelopmental condition characterized by poor motor proficiency that interferes with an individual’s activities of daily living (1). This disorder defines children who, for no medical reasons, fail to acquire adequate motor skills despite their intelligence levels (2). The movements of children with DCD are often described as “clumsy” and “uncoordinated,” and frequently lead to performance difficulties that typically developing (TD) children perform easily.

Children with DCD are not just low in athletic ability; they struggle to perform the everyday activities that most of us take for granted – zipping a knapsack, tying shoes, using scissors, or buttering bread (3). Regulating Critical Period Plasticity: Insight from the Visual System to Fear Circuitry for Therapeutic Interventions. Introduction As the brain develops, particular regions undergo different critical periods of plasticity when their underlying circuits gain heighted sensitivity to experience (1, 2). Experience during these early temporal periods has a profound effect on the wiring of skills and behaviors, such as language, music playing, visual processing, and emotional processing.

When the critical period for a region closes, the adaptations in its circuitry become fixed, locking in adjusted ways of processing and responding to stimuli and bringing plasticity into a latent state. The Pointing Errors in Optic Ataxia Reveal the Role of “Peripheral Magnification” of the PPC. The Treatment Based on Temporal Information Processing Reduces Speech Comprehension Deficits in Aphasic Subjects. Introduction. Update on the implication of potassium channels in autism: K+ channelautism spectrum disorder. White Matter Microstructure is Associated with Auditory and Tactile Processing in Children with and without Sensory Processing Disorder. Why the Diagnosis of Attention Deficit Hyperactivity Disorder Matters.