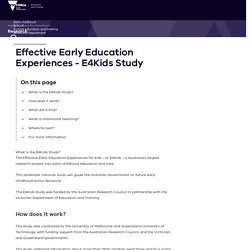 The Effective Early Education Experiences for Kids - or E4Kids - is Australia’s largest research project into early childhood education and care. This landmark national study will guide the Victorian Government on future early childhood policy decisions. The E4Kids study was funded by the Australian Research Council in partnership with the Victorian Department of Education and Training.​ The study was conducted by the University of Melbourne and Queensland University of Technology, with funding support from the Australian Research Council, and the Victorian and Queensland governments. Hattie Ranking: Teaching Effects.

Play Is Serious Business. Reading to your child: the difference it makes - The Spoke – Early Childhood Australia's Blog. Love, love, love. Love and affection are natural and normal aspects of human relationships and are fundamental to the healthy growth of young children. 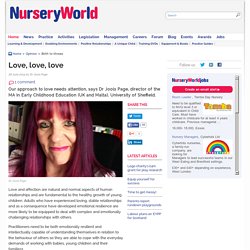 Adults who have experienced loving, stable relationships and as a consequence have developed emotional resilience are more likely to be equipped to deal with complex and emotionally challenging relationships with others. Practitioners need to be both emotionally resilient and intellectually capable of understanding themselves in relation to the behaviour of others so they are able to cope with the everyday demands of working with babies, young children and their families1. Young children flourish when they are in the company of adults who are genuinely interested in them and are able to form strong, attuned attachment relationships with them2. 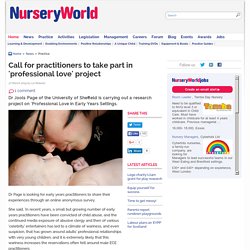 She said, 'In recent years, a small but growing number of early years practitioners have been convicted of child abuse, and the continued media exposure of abusive clergy and then of various ‘celebrity’ entertainers has led to a climate of wariness, and even suspicion, that has grown around adults’ professional relationships with very young children; and it is extremely likely that this wariness increases the reservations often felt around male ECE practitioners. 'A difficulty for those who work in early years settings is how to express the affectionate and caring behaviours which the role demands of them in their loco parentis, and which very young children need in their development of healthy attachments.' Dr Page said she developed the term ‘professional love’ to try to understand these intimacies.

Access the survey at. Moffitt ECE Paper 2015 11 12a jlg. Osgood Keynote slides. McKell_Childcare-Report.pdf. RB455_Effective_pre-school_primary_and_secondary_education_project.pdf. Learning to Learn: Teaching For Effective Learning. The First Year. In the late 1980s, when the crack cocaine epidemic was ravaging America’s cities, Hallam Hurt, a neonatologist in Philadelphia, worried about the damage being done to children born to addicted mothers. 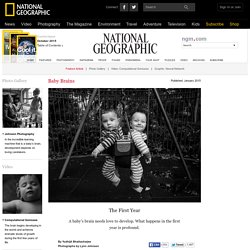 She and her colleagues, studying children from low-income families, compared four-year-olds who’d been exposed to the drug with those who hadn’t. They couldn’t find any significant differences. Instead, what they discovered was that in both groups the children’s IQs were much lower than average. “These little children were coming in cute as buttons, and yet their IQs were like 82 and 83,” Hurt says. “Average IQ is 100. The revelation prompted the researchers to turn their focus from what differentiated the two groups toward what they had in common: being raised in poverty. The researchers found that children who received more attention and nurturing at home tended to have higher IQs. 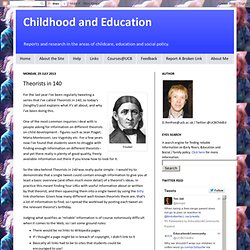 Post explains what it's all about, and why I've been doing this. One of the most common inquiries I deal with is people asking for information on different theorists on child development - figures such as Jean Piaget, Maria Montessori, Lev Vygotsky etc. For a few years now I've found that students seem to struggle with finding enough information on different theorists - and yet there really is plenty of good quality, freely available information out there if you know how to look for it.

So the idea behind Theorists in 140 was really quite simple - I would try to demonstrate that a single tweet could contain enough information to give you at least a basic overview (and often much more detail) of a theorist's ideas. Judging what qualifies as 'reliable' information is of course notoriously difficult when it comes to the Web, so I set some ground rules: Engaging%20Families%20in%20the%20ECD%20Story-Neuroscience%20and%20ECD. 2535274. The Most Dangerous Word in the World. If I were to put you into an fMRI scanner—a huge donut-shaped magnet that can take a video of the neural changes happening in your brain—and flash the word “NO” for less than one second, you’d see a sudden release of dozens of stress-producing hormones and neurotransmitters.

These chemicals immediately interrupt the normal functioning of your brain, impairing logic, reason, language processing, and communication. In fact, just seeing a list of negative words for a few seconds will make a highly anxious or depressed person feel worse, and the more you ruminate on them, the more you can actually damage key structures that regulate your memory , feelings, and emotions.[1] You’ll disrupt your sleep , your appetite , and your ability to experience long-term happiness and satisfaction.

Any form of negative rumination—for example, worrying about your financial future or health—will stimulate the release of destructive neurochemicals. The Power of Yes [3] Duhachek A, Zhang S, Krishnan S. Connections in the brains of young children strengthen during sleep, CU-Boulder study finds. While young children sleep, connections between the left and the right hemispheres of their brain strengthen, which may help brain functions mature, according to a new study by the University of Colorado Boulder. 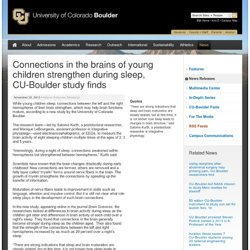 The research team—led by Salome Kurth, a postdoctoral researcher, and Monique LeBourgeois, assistant professor in integrative physiology—used electroencephalograms, or EEGs, to measure the brain activity of eight sleeping children multiple times at the ages of 2, 3 and 5 years. “Interestingly, during a night of sleep, connections weakened within hemispheres but strengthened between hemispheres,” Kurth said. Scientists have known that the brain changes drastically during early childhood: New connections are formed, others are removed and a fatty layer called “myelin” forms around nerve fibers in the brain.

The growth of myelin strengthens the connections by speeding up the transfer of information. The Nest - Australian Research Alliance for Children and Youth (ARACY) Latest Nest newsWhat is The Nest action agenda? 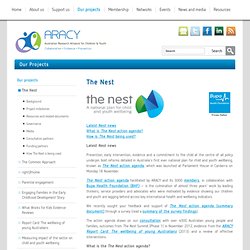 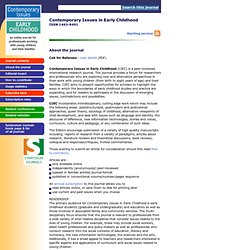 The journal provides a forum for researchers and professionals who are exploring new and alternative perspectives in their work with young children (from birth to eight years of age) and their families. CIEC aims to present opportunities for scholars to highlight the ways in which the boundaries of early childhood studies and practice are expanding, and for readers to participate in the discussion of emerging issues, contradictions and possibilities. The Editors encourage submission of a variety of high quality manuscripts including: reports of research from a variety of paradigms; articles about research, literature reviews and theoretical discussions; book reviews; colloquia and responses/critiques; invited commentaries. Those wishing to submit an article for consideration should first read How to contribute. Center on the Developing Child at Harvard University.