What Questions are We Asking? Challenges for Development Education from a Discourse Analysis of National Surveys on Attitudes to Development in Ireland. As in the earlier surveys, in terms of agency and development relationships, the repeated use of the term ‘helping’ gives the impression that Ireland (and the Irish) have agency whereas those in ‘developing countries’ do not, and that this agency is limited to patronage and associated with trusteeship. 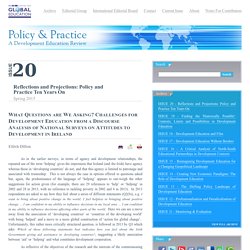 This is not always the case in options offered to questions asked but, again, the predominance of the language of ‘helping’ appears to out-weigh the other suggestions for action given (for example, there are 29 references to ‘help’ or ‘helping’ in 2002 and 28 in 2013, with no reference to tackling poverty in 2002 and 4 in 2013). In 2013 respondents are asked to say how they feel about a series of different statements (Q2(b)), e.g.

I want to bring about positive change in the world; I feel helpless in bringing about positive change ... I am confident in my ability to influence decisions in my local area ... Surveys of University and Third Level Students, 2006/7 and 2012. Charitable donations during the downturn. Eurobarometer 2013. 29/11/2013 at 3:27 pm Earlier this week, EU Commissioner for Development Andris Piebalgs presented a new “Eurobarometer” report on “EU Development Aid and the Millennium Development Goals”. 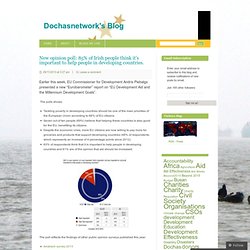 The polls shows: Tackling poverty in developing countries should be one of the main priorities of the European Union according to 66% of EU citizens.Seven out of ten people (69%) believe that helping these countries is also good for the EU, benefiting its citizens.Despite the economic crisis, more EU citizens are now willing to pay more for groceries and products that support developing countries (48% of respondents, which represents an increase of 4 percentage points since 2012).83% of respondents think that it is important to help people in developing countries and 61% are of the opinion that aid should be increased. Dóchas / Amarach poll 2013. 08/10/2013 at 2:50 pm Guest blog by Stephen McCloskey, Centre for Global Education, Belfast. 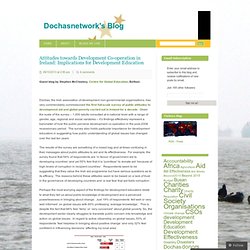 Dóchas, the Irish association of development non-governmental organisations, has very commendably commissioned the first full-scale survey of public attitudes to development aid and global poverty carried out in Ireland for a decade. Given the scale of the survey – 1,000 adults consulted at a national level with a range of gender, age, regional and social variables – it’s findings effectively represent a barometer of how the public perceive development co-operation in the post-2008 recessionary period. The survey also holds particular importance for development educators in suggesting how public understanding of global issues has changed over the last ten years.

The results of the survey are something of a mixed bag and at times confusing in their messages about public attitudes to aid and its effectiveness. Read more: Also read: Like this: Like Loading... Blog post on poll's implications. 22/02/2013 at 2:37 pm In December 2012, Suas presented the results of a piece of research by Amárach Research, on Irish university students’ views on global development. 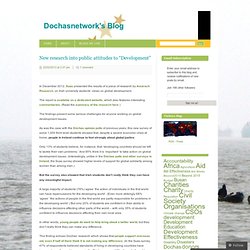 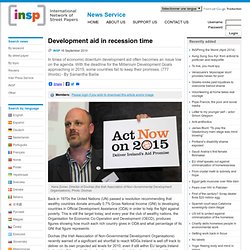 With the deadline for the Millenium Development Goals approaching in 2015, some countries fail to keep their promises. (777 Words) - By Samantha Bailie Hans Zomer, Director of Dochas (the Irish Association of Non-Governmental Development Organisations). Photo: Dochas Back in 1970s the United Nations (UN) passed a resolution recommending that wealthy countries donate annually 0.7% Gross National Income (GNI) to developing countries in Official Development Assistance (ODA) in order to help the fight against poverty.

This is still the target today, and every year the club of wealthy nations, the Organisation for Economic Co-Operation and Development (OECD), produces figures showing how much each rich country gives in ODA and what percentage of its GNI that figure represents. As Dochas states with regards to contributing during a recession: "Aid is now not less affordable than before. MRBI poll May 2002. Attitudes to charities & advocacy.