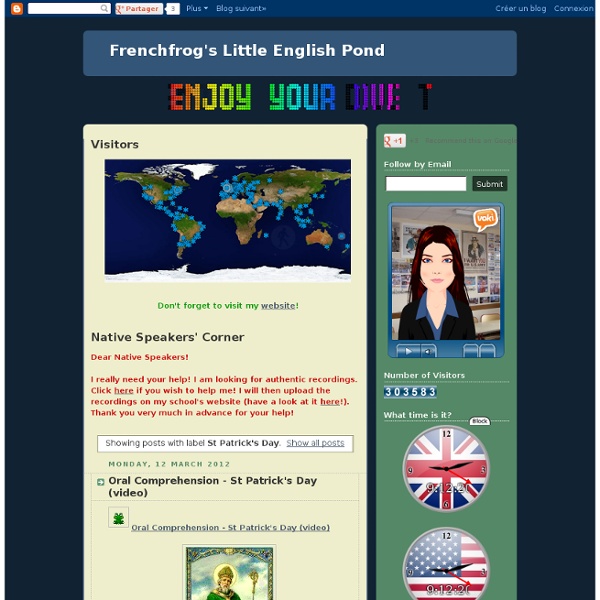 Tracks 2013: FAQ: The conflict in Northern Ireland Ireland's history is a long story of suffering, suppression and poverty, but also one of strong people who refuse to give up and who manage to see things from a humorous side in the face of hardship. After most of Ireland got its freedom from Britain, the northern part remained in union with England, Scotland and Wales. In the following text we will look at some frequently asked questions (FAQ) in connection with the situation in Northern Ireland. What is the difference between Ireland and Northern Ireland? Ireland – or the Republic of Ireland as it is officially named – is a completely separate country and has no longer any formal bond to the UK. Northern Ireland, on the other hand, is still a part of the UK (the United Kingdom of Great Britain and Northern Ireland), together with England, Scotland and Wales.

Bet You Didn't Know: St. Patrick's Day Video - History of St. Patrick’s Day You're almost done! You will soon receive an activation email. Once you click on the link, you will be added to our list. If you do not receive this email, please contact us. To ensure delivery to your inbox, add us to your address book.

Northern Ireland: A brief background to the conflict FAQs ABOUT NORTHERN IRELAND Ireland's history is a long story of suffering, suppression and poverty, but also one of strong people who refuse to give up and who manage to see things from a humorous side in the face of hardship. After most of Ireland got its freedom from Britain, the northern part remained in union with England, Scotland and Wales. In the following text we will look at some frequently asked questions (FAQs) in connection with the situation in Northern Ireland.

How St. Patrick's Day Works" Regardless of your heritage, you're prob­ably very aware of St. Patrick's Day. Celebrated each year on March 17, it's a day when people from all sorts of national and ethnic backgrounds dip a toe in Irish culture. Many observe the day by sporting a bright green shirt and meeting up with friends at a favorite local Irish pub. But there's a lot more to St. Lessons! Real English ESL Videos & Lessons. Completely Free! Real English is a Registered Trademark of The Marzio School. Lesson 1 - Hi! Level: BeginnerNormal, Formal, and Informal Greetings, What's your name?, and possessive adjectives. Lesson 2 - Where are you from? Level: BeginnerIncludes This vs that and an introduction to introducing people. Lesson 3a - The Alphabet

Bobby Sands Biography Early Years A hero among Irish nationalists, Robert Gerard "Bobby" Sands was born in Belfast, Ireland on March 9, 1954. Bobby Sands was the oldest of four children born to John and Rosaleen Sands, and the couple's first son. At an early age, Sands's life was affected by the sharp divisions that shaped Northern Ireland. Authentic video in the classroom: Ireland II My second example of utilising authentic video in the EFL classroom is based on the same 50-minute travel video as my first. Of course, one can apply this to any video, but this time I will stick with Ireland. How I do it now will, however, differ from my last post because now I’ll concentrate on the language and vocabulary awareness in detail (but I wouldn’t use both methods on the same video in the same class, though). This approach is, however, associated with a lot of painstaking preparatory work for the teacher, because transcription of the video material needs to be done, at least for some of the clips. It takes about 1 hour to take down 5 minutes of video material, so one needs plenty of time to get a complete transcript.

St. Patrick's Day When did it start? Who was Saint Patrick? Why do we celebrate it? Telling the Time - How to tell time in English - English basics During this lesson you will learn to tell the time in English using images and text. The first part of the lesson you wlll have to learn the words that are used in telling the time, followed by a example clocks with times on for you to see what the correct time is. The image below is split into 2 colours, green and yellow. The green side 'to' and the yellow side is 'past'. Authentic video in the classroom: Ireland I What you see here is an approximately 3-minute clip from a 50-minute travel video on Ireland. It is authentic, in the sense that it’s intended for English-speaking people interested in travelling and other countries, not for language learners per se. “Ireland” is one of many videos in the Globetrekker series produced by UK-based Pilot Productions. The series is based on the concept of having a travel guide touring a specific country, experiencing cultural highlights, meeting local people and basically learning about the country together with the viewer.

All of Me by John Legend In this song John Legend uses opposite meanings to convey how he feels about his wife. It is a very ‘honest’ love song. I think it reflects real life rather than a fairytale version of a relationship.