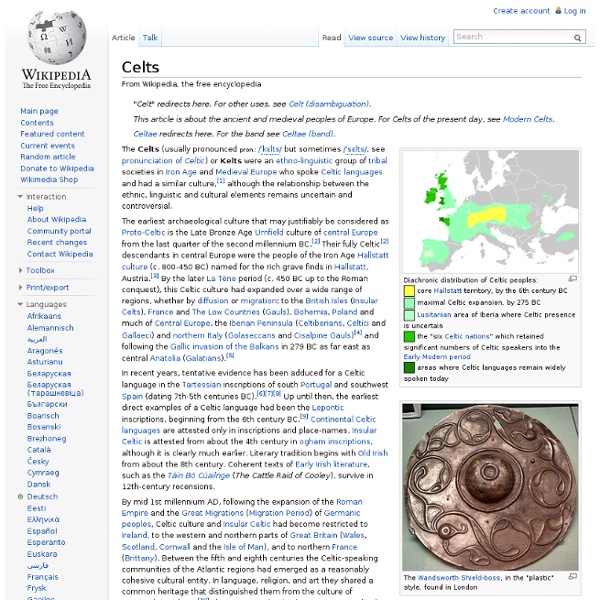 Diachronic distribution of Celtic peoples: core Hallstatt territory, by the 6th century BC maximal Celtic expansion, by 275 BC Lusitanian area of Iberia where Celtic presence is uncertain The Celts (/ˈkɛlts/, occasionally /ˈsɛlts/, see pronunciation of Celtic) or Kelts were an ethnolinguistic group of tribal societies in Iron Age and Medieval Europe who spoke Celtic languages and had a similar culture,[1] although the relationship between the ethnic, linguistic and cultural elements remains uncertain and controversial. The earliest undisputed direct examples of a Celtic language are the Lepontic inscriptions, beginning in the 6th century BC.[6] Continental Celtic languages are attested almost exclusively through inscriptions and place-names. Names and terminology Continental Celts are the Celtic-speaking people of mainland Europe and Insular Celts are the Celtic-speaking peoples of the British and Irish islands and their descendants. Origins Overview of the Hallstatt and La Tène cultures: Related:  frikes

Rothschild family - Wikipedia A Rothschild house, Waddesdon Manor in Waddesdon, Buckinghamshire, England donated to the National Trust by the family in 1957. House of the Rothschild family, Judengasse, Frankfurt A house formerly belonging to the Viennese branch of the family (Schillersdorf Palace). Schloss Hinterleiten, one of the many palaces built by the Austrian Rothschild dynasty. Donated to charity by the family in 1905. Beatrice de Rothschild's villa on the Côte d'Azur, France The Rothschild family is a wealthy family descending from Mayer Amschel Rothschild, a court Jew to the German Landgraves of Hesse-Kassel in the Free City of Frankfurt, who established his banking business in the 1760s.[2] Unlike most previous court Jews, Rothschild managed to bequeath his wealth and established an international banking family through his five sons,[3] who established themselves in London, Paris, Frankfurt, Vienna, and Naples. Overview Families by country: The Napoleonic Wars One of the smaller city houses, Vienna. British branch

The Lost World of the Maya is Finally Emerging From the Jungle Thomas Garrison pauses in the middle of the jungle. “That’s the causeway right there,” he says, pointing into a random patch of greenery in the Guatemalan lowlands. I squint, trying to make out features in the tangled rainforest undergrowth. There’s a small lump, rising no more than a foot or two from the forest floor. The Ithaca College archaeologist has spotted the buried remnants of a Maya road, a ribbon of limestone that once cut through the wrinkled landscape. In the 1,000-plus years since the Maya society collapsed, the jungle has returned with a vengeance. Garrison, an expert at picking out buried structures, had walked right by this road for years, never knowing it was there. Lidar, which stands for light detection and ranging, bathes the jungle canopy in a stream of laser beams delivered from planes flying above. Back in camp, Garrison pulls up the data on his laptop. Peephole to Panorama Over a thousand years ago, the Maya dominated this environment.

Germanic peoples The Germanic peoples (also called Teutonic, Suebian or Gothic in older literature) are[1] an Indo-European ethno-linguistic group of Northern European origin, identified by their use of the Germanic languages which diversified out of Proto-Germanic starting during the Pre-Roman Iron Age.[2] The term "Germanic" originated in classical times, when groups of tribes were referred to using this term by Roman authors. For them, the term was not necessarily based upon language, but rather referred to tribal groups and alliances who were considered less civilized, and more physically hardened, than the Celtic Gauls living in the region of modern France. Tribes referred to as Germanic in that period lived generally to the north and east of the Gauls. Ethnonym Germanic The Latin ethnonym "Germani" seems to be attested in the Fasti Capitolini inscription for the year 222 BCE – de Galleis Insvbribvs et Germ(aneis) – where it may simply refer to "related" peoples, namely related to the Gauls.

The Roman Empire, explained in 40 maps Two thousand years ago, on August 19, 14 AD, Caesar Augustus died. He was Rome’s first emperor, having won a civil war more than 40 years earlier that transformed the dysfunctional Roman Republic into an empire. Under Augustus and his successors, the empire experienced 200 years of relative peace and prosperity. 1) The rise and fall of Rome In 500 BC, Rome was a minor city-state on the Italian peninsula. 2) The Roman Empire was vast At its height around 100 AD, the Roman Empire stretched from Britain in the Northwest to Egypt in the Southeast. 3) Traveling around the empire was excruciatingly slow This map provides some perspective on just how big Roman territory was relative to the transportation technologies of the day. 4) The provinces of Rome in 117 The Roman Empire reached its greatest size under the reign of Trajan in 117 AD. The rise of Rome 5) Italy before Roman conquest In its early years, the Romans shared Italy with several other peoples. 6) Rome conquers Italy Rome’s military

Julius Caesar Gaius Julius Caesar was born on 12 July 100 BC in Rome, son of Gaius Caesar and Aurelia. Governor of Gaul 58-49 BC. Appointed dictator for ten years in 47 B, for life on 14 February 44 BC. Married initially to Cornelia (one daughter, Julia), then to Pompeia, alas to Calpurnia. Assassinated on 15 March 44 BC. Deified in 42 BC. Caesar was tall, fair-haired, well built and of sound health. though he did suffer from the occasional epileptic fit. Caesar grew up in a period of unrest and civil war in Rome. As a member of an old aristocratic family Julius was expected, at the completion of his education, to assume a modest office on the lower end of the long ladder of the Roman political career. His first step was to marry into a yet more distinguished family. But these were dangerous contacts to have. And so Caesar left Rome to join the army. After this Caesar left the army, yet it was still considered unwise for him to return to Rome. In 60 BC Caesar's career took him back to Spain.

Ariovistus History[edit] Sources[edit] Ariovistus and the events he was part of are known from Caesar's Commentarii de Bello Gallico.[1] Caesar, as a participant in the events, is a primary source, although as his Commentaries were in part political propaganda they may be suspected of being self-serving. Later historians, notably Dio Cassius, are suspicious of his motives.[2] Ariovistus's role and status[edit] Ariovistus was a native of the Suebi. He was recognised as a king by the Roman Senate, but how closely the Roman title matched Ariovistus' social status among the Germans remains unknown. Intervention in Gaul[edit] Some time before Caesar's governorship of Gaul (which began in 58 BC), the Gaulish Arverni and Sequani enlisted Ariovistus's aid in their war against the Aedui. Caesar does not say what the cause of the conflict was, but the Sequani controlled access to the Rhine river along the valley of the Doubs. The Arar formed part of the border between the Aedui and the Sequani. The battle[edit]

List of Roman legions This is a list of Roman legions, including key facts about each legion, primarily focusing on Principate (early Empire, 27 BC - 284 AD) legions, for which there exists substantial literary, epigraphic and archaeological evidence. Until the 1st century BC, legions were temporary citizen levies, raised for specific campaigns and disbanded after them. By the early 1st century BC, legions were mixed volunteer/conscript units. Legions became standing units, which could remain intact long after a particular campaign was finished. Large numbers of new legions were raised by rival warlords for the civil wars of the period 49-31 BC. However, when Augustus became sole ruler in 31 BC, he disbanded about half of the over 50 legions then in existence. During the Dominate (late Empire, 284–476), legions were also professional, but are little understood due to scarcity of evidence compared to the Principate. Late Republican legions[edit] Early Empire legions[edit] Code for Roman provinces in the table:

Achilles In Greek mythology, Achilles (/əˈkɪliːz/; Ancient Greek: Ἀχιλλεύς, Akhilleus, pronounced [akʰillěws]) was a Greek hero of the Trojan War and the central character and greatest warrior of Homer's Iliad. Achilles was said to be a demigod; his mother was the nymph Thetis, and his father, Peleus, was the king of the Myrmidons. Etymology[edit] Achilles' name can be analyzed as a combination of ἄχος (akhos) "grief" and λαός (Laos) "a people, tribe, nation, etc." In other words, Achilles is an embodiment of the grief of the people, grief being a theme raised numerous times in the Iliad (frequently by Achilles). Achilles' role as the hero of grief forms an ironic juxtaposition with the conventional view of Achilles as the hero of kleos (glory, usually glory in war). Birth[edit] Achilles was the son of the Nereid Thetis and Peleus, the king of the Myrmidons. However, none of the sources before Statius makes any reference to this general invulnerability. Achilles in the Trojan War[edit] Troilus[edit]

Aquila (Roman) A modern reconstruction of an aquila An aquila, or eagle, was a prominent symbol used in ancient Rome, especially as the standard of a Roman legion. A legionary known as an aquilifer, or eagle-bearer, carried this standard. Each legion carried one eagle. The eagle was extremely important to the Roman military, beyond merely being a symbol of a legion. The minor divisions of a cohort, called centuries, had also each an ensign, inscribed with the number both of the cohort and of the century. In the Arch of Constantine at Rome there are four sculptured panels near the top which exhibit a great number of standards and illustrate some of the forms here described. When Constantine embraced Christianity, a figure or emblem of Christ, woven in gold upon purple cloth, was substituted for the head of the emperor. Even after the adoption of Christianity as the Roman Empire's religion, the Aquila eagle continued to be used as a symbol.