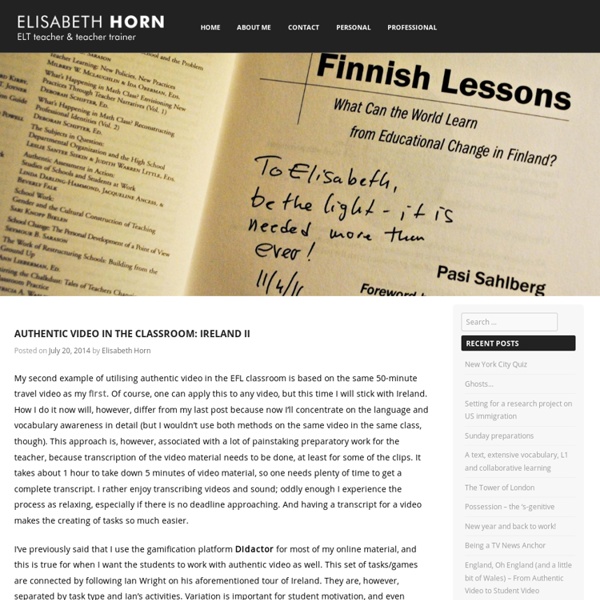 My second example of utilising authentic video in the EFL classroom is based on the same 50-minute travel video as my first. Of course, one can apply this to any video, but this time I will stick with Ireland. How I do it now will, however, differ from my last post because now I’ll concentrate on the language and vocabulary awareness in detail (but I wouldn’t use both methods on the same video in the same class, though). I’ve previously said that I use the gamification platform Didactor for most of my online material, and this is true for when I want the students to work with authentic video as well. The “game board” that the students start out with looks like this: The idea is that they start with task number 1A and then follow Ian’s route one step at a time until they reach the end of the journey. 1. 2. 3. This is quite simply a dictation kind of task involving intense listening and writing (+ spelling and grammar). 4A Road bowling This is a memory game played a little differently. Related:  Ireland • teaching english • Documentaries and educational videos

How to Start a Great Writing Center As a high school student at Brimmer and May, an independent school in Chestnut Hill, Massachusetts, I spent many helpful hours in the writing center. Rather than line edit my work with the all-intimidating "red pen" (a badge of honor for many teachers), talented staff members posed deep, prodding questions to help me realize how I could improve my prose, structure, and analysis. I'm excited about returning to my alma mater next year to teach history and serve as the school’s writing center director. To gain better insight into how to do my job well, I recently reached out to Prof. Richard Kent, director of the Maine Writing Project (a site of the National Writing Project), and author of A Guide to Student-Staff Writing Centers: Grades 6-12. In assuming my new position, I'm keeping the following points in mind. 1. A writing center is a place for all writers of all abilities, and writing center tutors are often writers of all abilities themselves. 2. 3. 4. 5. 6.

Using digital video for cultural and linguistic awareness in ELT – an unofficial introduction | Elisabeth Horn Technology as such and technological skills in particular are not crucial for teachers to use digital video to enhance cultural and target language awareness in ELT. The main point is actually multitasking in the sense of the students using multiple senses simultaneously in order to absorb and handle the information given. Listening, reading, writing, speaking and even getting emotionally involved are at the centre of language learning. And whereas videos, be it fictional films, documentaries or newsflashes, have long been recognized as a useful tool in the language classroom, their place in the curriculum have been marginal, because so much information is given in such a short time span that it has been impossible to utilize them effectively in ELT. Therefore they have mainly been used as complementary sources of information or as a means of tuning in to a particular subject. Let’s take an example. Deep-fried Mars bars Jellied eels ─ Jellied eels… Not like lollies, eels! Whisky

Creating a Caring Classroom Creating a Caring Classroom starts on the very first day of school. I think the most important thing a teacher can do that first week is to establish a warm and caring atmosphere in his or her classroom. You'll need to build an atmosphere of trust, where students can feel free to be themselves without worrying that classmates will make fun of them. At the same time, you'll want to establish clear expectations for acceptable behavior right from the very beginning. There are many ways to accomplish these goals, and I'm going to share a few of my favorites. If you're looking for the free webinar, Sowing the Seeds of Success, you'll find it at the end of the page. Featured Caring Classroom Freebies Seating Arrangements and Team Formation Many people ask me when I form my CL teams. Personally, I start off on Day 1 with the kids in random teams (since I don't know enough about them to form heterogeneous teams). Classroom Management Ideas Teambuilding 1. 2. 3. 4. 5. Classbuilding 1. 2. 3.

Documentary Tube – Watch Documentaries Online for FREE Northern Ireland: A brief background to the conflict FAQs ABOUT NORTHERN IRELAND Ireland's history is a long story of suffering, suppression and poverty, but also one of strong people who refuse to give up and who manage to see things from a humorous side in the face of hardship. After most of Ireland got its freedom from Britain, the northern part remained in union with England, Scotland and Wales. In the following text we will look at some frequently asked questions (FAQs) in connection with the situation in Northern Ireland. Note: To find out more about the history of the conflict and the current situation in Northern Ireland, go to the links given below. What is the difference between Ireland and Northern Ireland? Ireland – or the Republic of Ireland as it is officially named – is now a completely separate country and has no longer any formal bond to the UK. Copyright: Getty Images Why is there so much talk of Catholics and Protestants in the conflict in Northern Ireland? Why has this separation between the two Irish nations taken place?

How to get over a plateau stopping you from making progress: how I’m doing it with my Chinese One of the biggest questions I get asked by people already deep into their language learning project relates to how they should get over the plateau they are stuck in. There are many different types of plateaux you could be looking at. Maybe you have learned some basic vocab but can’t muster up the courage to use it with people? Maybe you’re already talking but can’t get past speaking more than a few words? Maybe you are actually speaking, but stuck at a certain level of conversation with lots of mistakes? Wherever you are, it seems like no amount of work, studying, practice or anything else is getting you out of this spot. Today’s advice is very simple for how I’ve learned the hard way to get out of such a plateau, as I’ve encountered dozens of plateaux in my language learning projects over the last decade: Completely change your strategy This may seem obvious, but if what you are doing now isn’t working to bring you forward then what you are doing now is not good enough.

videolectures.net - videolectures.net Bobby Sands Biography Early Years A hero among Irish nationalists, Robert Gerard "Bobby" Sands was born in Belfast, Ireland on March 9, 1954. Bobby Sands was the oldest of four children born to John and Rosaleen Sands, and the couple's first son. At an early age, Sands's life was affected by the sharp divisions that shaped Northern Ireland. At the age of 10, he was forced to move with his family out of their neighborhood due to repeated intimidation by British loyalists. "I was only a working-class boy from a Nationalist ghetto," Sands later wrote about his childhood. Loyalist intimidation proved to be a theme in Sands's life. Activism The steady number of conflicts pushed Sands to join the Republican Movement in 1972. In late 1976, authorities arrested Sands again, this time in connection with a bombing that had taken place at a large furniture company, and an ensuing gun battle. As a prisoner, Sands's stature only grew. Death and Legacy

TEDx Last year I spoke at TEDx, an independently organized TED event, about my strategy of Speaking From Day 1. This video introduces some of the concepts I explain in more detail in my international best selling book, Fluent in 3 Months. I expand on these ideas even more here on Fi3m PLUS (free for book owners) and in my new Fi3m PREMIUM package, which includes the very best guides and videos I have to offer. If you are interested in getting a five-day crash-course in language hacking, ending with a two-chapter preview of the Language Hacking Guide for free, as well as monthly hacks, site updates, handy links, and language learning tips, just click below to join! Can’t see the signup box?

TeacherTube - Teach the World How St. Patrick's Day Works" Regardless of your heritage, you're prob­ably very aware of St. Patrick's Day. Celebrated each year on March 17, it's a day when people from all sorts of national and ethnic backgrounds dip a toe in Irish culture. ­­For instance, who was Saint Patrick? As the luck of the Irish would have it, we've got the answers to these questions as well as lots more information about this historic holiday.

Reaching a Plateau in Language Learning – How to Get Out of It? | Lingholic There is probably nothing as frustrating as putting a hell of a lot of amount of work, and not feeling like you’re making any progress. Sadly, though, this situation happens to a lot of language learners, and it often becomes a dominant factor in people’s decision to stop learning a foreign language halfway through their goals. This is what we commonly call “reaching a plateau”. So why does it happen, and how can we avoid it, or at least, get out of it? Routine, and Reaching the Autonomous Stage Dr. There are many causes of plateaus but a major one seems to be routine, according to many experts. In “Moonwalking With Einstein”, a book about memory and skill development, author Joshua Foer says that when people first learn to use a keyboard, they improve very quickly from sloppy single-finger pecking to careful two-handed typing, until eventually the fingers move so effortlessly across the keys that the whole process becomes unconscious and the fingers seem to take on a mind of their own.