Senate Intelligence Committee Subpoenas Trump Attorney Michael Cohen. If Trump Told Cohen to Lie, Impeachment Is Coming. Impeach Trump Now. On January 20, 2017, Donald Trump stood on the steps of the Capitol, raised his right hand, and solemnly swore to faithfully execute the office of president of the United States and, to the best of his ability, to preserve, protect, and defend the Constitution of the United States. 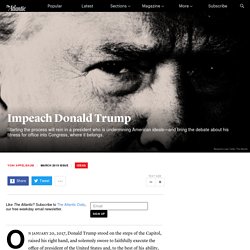 He has not kept that promise. To hear more feature stories, see our full list or get the Audm iPhone app. Instead, he has mounted a concerted challenge to the separation of powers, to the rule of law, and to the civil liberties enshrined in our founding documents. He has purposefully inflamed America’s divisions. He has set himself against the American idea, the principle that all of us—of every race, gender, and creed—are created equal. ‘She’s satin and steel’: Pelosi wages war on Trump. Donald Trump may have finally met his match in Nancy Pelosi. 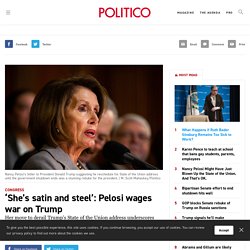 As the partial government shutdown grinds on with no end in sight, the struggle between the president and the speaker is becoming an unprecedented political fight — with the fallout likely to extend far beyond this episode. Story Continued Below Pelosi privately refers to Trump as the “Whiner in chief. " She’s questioned his manhood. Michael Cohen Agrees to Testify to Congress About Work for Trump. Not criminal is not good enough. What happened when Trump showed me his foot (opinion) "What he got was access to Fred Trump," Elysa Braunstein told Steven Eder of the Times. 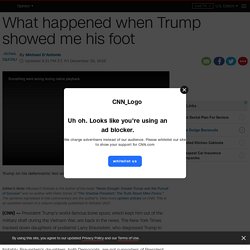 "If there was anything wrong in the building, my dad would call and Trump would take care of it immediately. That was the small favor that he got. " - The Washington Post. N.Y. Today: Investigating Trump’s New York Dealings. Donald Trump avoided the military draft 5 times, but it wasn't uncommon for young men from influential families to do so during the Vietnam War. A young Donald Trump was seemingly in good health when he graduated from the University of Pennsylvania in 1968, as the United States was mired in one of the bloodiest years of the Vietnam War. 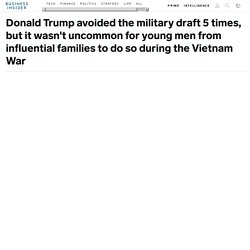 The 22-year-old — who was 6 feet 2 inches tall and an athlete — had already avoided the military draft four times in order to complete his college education. But that spring, as he was set to graduate, he received a diagnosis that landed him a fifth draft deferment that would once again keep him out of Vietnam: bone spurs. Did a Queens Podiatrist Help Donald Trump Avoid Vietnam? The tipster offered no names, but The Times used old city directories, held by the New York Public Library, and interviews with Queens podiatrists to identify Dr.

Braunstein. The doctor’s daughters said his role in Mr. It Is So Much Worse Than I Thought. Trump's tweet to Michael Flynn raises brows over Mueller investigation. President Donald Trump wished “good luck” to disgraced national security adviser Michael Flynn — who will be sentenced Tuesday for lying to FBI agents. 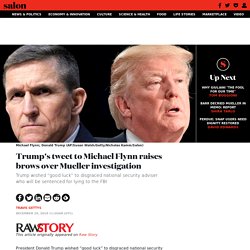 The retired U.S. Army general has pleaded guilty to lying to investigators, and has agreed to cooperate with special counsel Robert Mueller, who said Flynn deserved a light sentence because had provided him with substantial assistance in the Russia probe. “Good luck today in court to General Michael Flynn,” Trump tweeted. “Will be interesting to see what he has to say, despite tremendous pressure being put on him, about Russian Collusion in our great and, obviously, highly successful political campaign. FBI records about Michael Flynn are "unbelievably damning" for Trump. Why did former National Security Adviser Michael Flynn lie to the FBI at the beginning of President Donald Trump's administration? 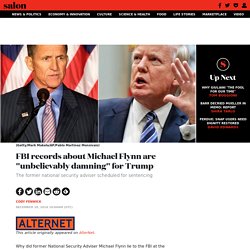 That question remains an enduring mystery of the presidency and of Special Counsel Robert Mueller's investigation. But new evidence revealed in the sentencing process for Flynn, who is due to be sentenced on Wednesday and is expected to receive no jail time, helps fill in details of the picture, as national security reporter Marcy Wheeler explained. James Comey unloads on House Republicans and Fox News. Following his closed-door testimony to the House Judiciary and Oversight committees on Monday, former FBI Director James Comey unloaded on House Republicans and Fox News. 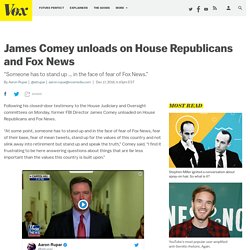 “At some point, someone has to stand up and in the face of fear of Fox News, fear of their base, fear of mean tweets, stand up for the values of this country and not slink away into retirement but stand up and speak the truth,” Comey said. “I find it frustrating to be here answering questions about things that are far less important than the values this country is built upon.”

Later, in response to a question from a Fox News reporter about whether he “shares responsibility” for “the FBI’s reputation taking a big hit,” Comey said, “No. Donald Trump's Legal Vise: How the Probes Have Proliferated. Photographer: Pool/Getty Images As President Donald Trump and his lawyers turn toward the new year, they’ll have to contend with a legal narrative that’s taken fuller shape through a flurry of court filings and news reports that began landing about three weeks ago and extended through Friday afternoon: Members of Trump’s presidential campaign — and possibly “Individual 1” himself — may have orchestrated a number of criminal conspiracies that took root before and during the 2016 presidential campaign, continued after Trump won the election, and have tainted the White House’s policies and torn at its operations ever since. 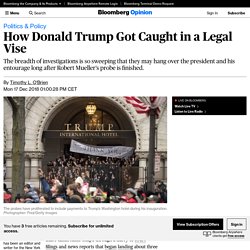 The breadth of investigations is so sweeping — as many on social media and reporters with the Washington Post, the Associated Press, and Bloomberg News have already noted — that few of the worlds Trump inhabits have escaped prosecutors’ attention. But there are many other threads, some related to Russia and some not, that investigators are pulling on. Trump inauguration finances under criminal investigation: WSJ.

The Trump Doctrine Emerges, and It's as Bad as We Thought. (Photo: Sipa USA via AP) Environmental activists protest Trump's withdrawal from the Paris Climate Agreement, outside Trump Tower in Chicago on June 2, 2017. 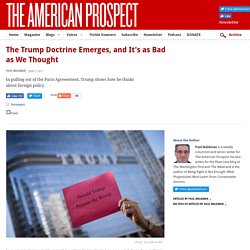 Donald Trump possesses a remarkable ability to appall us by doing exactly what he said he would when he ran for president. True, he has abandoned some promises and flip-flopped here and there, but mostly on the stuff that everyone knew was bogus from the start, unless you were possessed of an epic naïveté. (Oh dear, he's not really going to "drain the swamp" and stick it to Wall Street? I'm shocked.) 4 reasons why Senate Republicans see the Jamal Khashoggi affair as a turning point.

Author and attorney Seth Abramson on why Mueller “will ultimately be victorious.” Part 2 of 2. In an effort to understand what may happen next in the Russia scandal, and in Robert Mueller's investigation of President Trump and his inner circle, I recently spoke with veteran defense attorney and criminal investigator Seth Abramson. He is the author of numerous books, including his most recent, the New York Times bestseller "Proof of Collusion: How Donald Trump Betrayed America. " Abramson has also been a regular commentator for numerous major news outlets, including the BBC, the Washington Post, the Wall Street Journal, the New York Times, MSNBC, CNN, PBS and ABC News.

We have learned that Paul Manafort apparently violated his plea deal with Mueller and was both lying to prosecutors and feeding information back to Trump via the latter's attorneys. Why is that so wrong? Attorney and author Seth Abramson: Donald Trump sets “new paradigm for treachery.” Part 1 of 2. Special counsel Robert Mueller's investigation into the Donald Trump campaign's possible collusion with Russia to steal the 2016 presidential election marches onward. 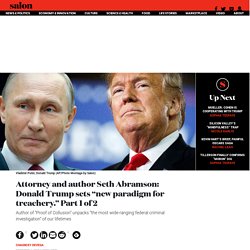 Trump and his alleged co-conspirators, defenders and allies appear to be encircled. Beginning last week, there have been a series of events which could spell doom for Donald Trump. Mueller link seen in mystery grand jury appeal. Special counsel Robert Mueller appears to be locked in a dispute with a mystery grand jury witness resisting giving up information sought in the ongoing probe into alleged Trump campaign collusion with Russia.

It's unclear exactly what the two sides are fighting over, but the case appears to resemble a separate legal battle involving an associate of Trump ally Roger Stone, Andrew Miller, who is fighting a Mueller subpoena. Miller's lawyers are using the case, slated to be argued at the D.C. Has Mueller Subpoenaed the President? Nelson W. Cunningham has served as a federal prosecutor in the Southern District of New York under Rudy Giuliani, general counsel of the Senate Judiciary Committee under then-Chair Joe Biden, and general counsel of the White House Office of Administration under Bill Clinton. These months before the midterm elections are tough ones for all of us Mueller-watchers. Has Mueller Subpoenaed the President?

Trump says he has not received subpoena from Mueller. The Observer view on Donald Trump’s vile rhetoric and the US pipe bombs. Donald Trump’s inadequate and self-referential response to last week’s spate of attempted pipe bomb attacks was, sadly, what we have come to expect from this most un-presidential of American presidents.

As Andrew Cuomo, the governor of New York, told CNN, Trump has “never fully made the transition” from candidate to White House incumbent. It is plainly too much to hope that he ever will. Trump’s narcissistic suggestion that the attacks, which exclusively targeted his political opponents and critics, were being exploited by Democrats and the media to discredit him ahead of next month’s congressional elections was disgraceful. Trump does not understand he is president of all Americans, not only those who voted for him. Trump Engaged in Suspect Tax Schemes as He Reaped Riches From His Father.

The One Trump Tweet That Mattered. Trump attorneys waive privilege on secret recording about ex-Playmate payment. Salon. Mueller team zeroes in on encrypted apps as witness turn in phones. FBI was right to deploy informant, senior GOP lawmaker says. Mueller reportedly takes an interest in Trump's pressure on Sessions. “This Is RICO 101”: Why Robert Mueller Isn’t Taking Rudy’s Bait. Baltimore Sun - We are currently unavailable in your region. Baltimore Sun - We are currently unavailable in your region. Trump is 'physical coward' Navy grads say before Academy commencement. Trump's nonsensical 'Spygate' conspiracy theory ends with a whimper. Michael Cohen partner pleads guilty in deal requiring cooperation in investigations. “I’d Die for My Wife and My Kids. And This Is All Ruining Their Lives”: After Rudy’s Meltdown, Michael Cohen Grapples with His New Reality.