Few Videos Live Up to the Often-used "Mind-blowing" Label - This Talk by Neuroscientist David Eagleman Does. Rosling's World - a documentary about Hans Rosling. Noam Chomsky: "The Emerging, New, World Order, its roots, our legacy" (2015) Noam Chomsky on Libertarian Socialism. A Conversation with Terence McKenna and Ram Dass (1992) Bitcoin vs. Political Power: The Cryptocurrency Revolution - Stefan Molyneux at TNW Conference. How art evolves consciousness: Alex Grey at TEDxMaui 2013. The Future Of Cryptocurrencies.

Bitcoin and Beyond: Cryptocurrencies Explained. Whose Consumption Is Killing the planet? THE CONSEQUENCES of human-induced climate change are dire. 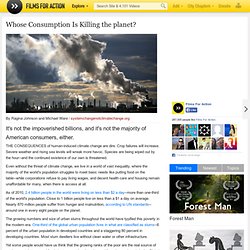 Crop failures will increase. Severe weather and rising sea levels will wreak more havoc. Species are being wiped out by the hour--and the continued existence of our own is threatened. Even without the threat of climate change, we live in a world of vast inequality, where the majority of the world's population struggles to meet basic needs like putting food on the table--while corporations refuse to pay living wages, and decent health care and housing remain unaffordable for many, when there is access at all.

As of 2010, 2.4 billion people in the world were living on less than $2 a day--more than one-third of the world's population. The growing numbers and size of urban slums throughout the world have typified this poverty in the modern era. This is simply not true. Clearly, the world's poor are not driving climate change. Proof that Osama bin Laden Was CIA and Died in 2001! Bush - Laden - CIA Connections. Watching the main stream media is something I don't do. 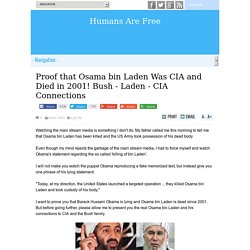 My father called me this morning to tell... Watching the main stream media is something I don't do. My father called me this morning to tell me that Osama bin Laden has been killed and the US Army took possession of his dead body. Even though my mind rejects the garbage of the main stream media, I had to force myself and watch Obama's statement regarding the so called 'killing of bin Laden'. I will not make you watch the puppet Obama reproducing a fake memorized text, but instead give you one phrase of his lying statement: "Today, at my direction, the United States launched a targeted operation ... they killed Osama bin Laden and took custody of his body.

" I want to prove you that Barack Hussein Obama is lying and Osama bin Laden is dead since 2001. From the September 18, 2001 issue of 'From The Wilderness' (FTW)Article by Michael C. (Click Here to Read Everything) Who was Osama Bin Laden? Chemtrails Proven and Lab-Tested by National News Station. There are different types of chemtrails, which are being used for various (dark) purposes. 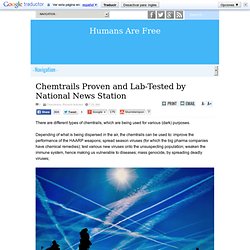 Dependi... There are different types of chemtrails, which are being used for various (dark) purposes. Depending of what is being dispersed in the air, the chemtrails can be used to: improve the performance of the HAARP weapons; spread season viruses (for which the big pharma companies have chemical remedies); test various new viruses onto the unsuspecting population; weaken the immune system, hence making us vulnerable to diseases; mass genocide, by spreading deadly viruses; As you may know by now, chemtrails are no longer a secret. The US Air Force wrote the book on chemtrails and even gave their name, the UN recently stated "The world won't cool without chemtrails" (hence admitting them, while promoting their "global warming" agenda), and also, NASA scientist admitted chemtrails during a phone conversation with a concerned citizen and even offered details about them.

The Dam is About to Break: 9/11 Truth Finally in the MSM. If you haven’t already watched the following video of Richard Gage from ARCHITECTS and ENGINEERS For... 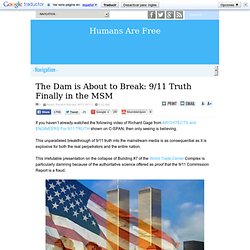 If you haven’t already watched the following video of Richard Gage from ARCHITECTS and ENGINEERS For 9/11 TRUTH shown on C-SPAN, then only seeing is believing. This unparalleled breakthrough of 9/11 truth into the mainstream media is as consequential as it is explosive for both the real perpetrators and the entire nation.

This irrefutable presentation on the collapse of Building #7 of the World Trade Center Complex is particularly damning because of the authoritative science offered as proof that the 9/11 Commission Report is a fraud. The ramifications are so far-reaching and profound that the entire world will undoubtedly change with the dissemination of these stunning, yet self-evident, revelations! Richard Gage speaking on C-SPAN: World-renowned Expert In Controlled Demolition Weighs In On The Engineered Collapse Of Building #7. The Alchemy of Time: Understanding the Great Year & the Cycles of Existence.