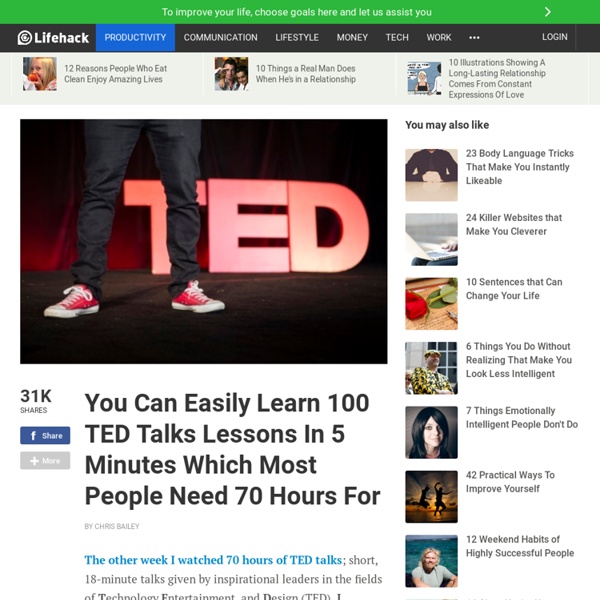 8 math talks to blow your mind Mathematics gets down to work in these talks, breathing life and logic into everyday problems. Prepare for math puzzlers both solved and unsolvable, and even some still waiting for solutions. Ron Eglash: The fractals at the heart of African designs When Ron Eglash first saw an aerial photo of an African village, he couldn’t rest until he knew — were the fractals in the layout of the village a coincidence, or were the forces of mathematics and culture colliding in unexpected ways? Here, he tells of his travels around the continent in search of an answer. How big is infinity? Arthur Benjamin does “Mathemagic” A whole team of calculators is no match for Arthur Benjamin, as he does astounding mental math in the blink of an eye. Scott Rickard: The beautiful math behind the ugliest music What makes a piece of music beautiful? Benoit Mandelbrot: Fractals and the art of roughness The world is based on roughness, explains legendary mathematician Benoit Mandelbrot.

Why Learning Through Social Networks Is The Future by Paul Moss, edmerger.com Students Need Professional Learning Networks, Too Learning to create, manage and promote a professional learning network (PLN) will soon become, if it’s not already, one of the most necessary and sought after skills for a global citizen, and as such, must become a prominent feature of any school curriculum. Few progressive educationalists would argue that a personal learning network (PLN) is not incredibly valuable and important. However presently, few discussions and promotions of PLN’s venture further than lauding specific benefits for teachers. Establishing a PLN seems simple enough on the surface, but to do it successfully and optimize its potential contains within in it a challenging and vigorous set of learning opportunities. 1. To curate or not to curate – that is actually not the question. The trend is irrefutable (Rosenbaum), and can facilitate reaching political disruption as Twitter founder Evan Williams notes. 2. 3. Learning Through Networks

Introducing the TED All-Stars: 50+ classic speakers TED2014 will bring together more than 70 speakers with fresh thinking on topics as diverse as leadership, genetics and the magic of fireflies. But this is our 30th anniversary conference, and it’s also time to look back at some of the incredible ideas surfaced in the past. At TED2014, we will hold five All-Stars sessions that bring 50+ favorite TED speakers back to the stage. To create this powerhouse speaker lineup, we reached out to the TED community and asked: who do you want to see return to TED2014? Session 1, “Planet Dearth,” hosted by Kathryn Schulz Session 2, “Beauty and the Brain,” hosted by Guy Raz Session 3, “Where are We Now? Session 4, “I Heart Design,” hosted by Chee Pearlman. Session 5, “The Future is Ours,” hosted by Helen Walters Want to hear these speakers live? Starting March 17, follow TED2014 on the TED Blog » Be a part of our next conference, TEDGlobal 2014, taking place in Rio de Janeiro, Brazil, in October »

The Five Greatest TED Talks of All Time by Maria Popova Democratizing knowledge, the meaning of life, and why everything we know about creativity is wrong. Today marks the fifth anniversary of TED talks becoming available to the world. As of this week, there are 1000 TED talks online in 81 languages, and they’ve been seen a cumulative half billion times. I can’t overstate how much TED has changed my life personally, and what a tour de force it has been culturally. I’ve previously said that my first month of watching TED talks in 2006 gave me more — more insight, more knowledge, more inspiration, more creative restlessness to do something with my life — than four years of “Ivy League education” combined, and I’ll say it again. Some time ago, I channeled my love for TED in a remix project called TEDify, collaging and animating soundbites from TED talks into narratives along different themes. When Elizabeth Gilbert took the TED stage in 2009, it didn’t take long to realize her talk would be among TED’s finest. Don’t be daunted.

In 2012, the biggest changes on the Web were in online education, social networks, and the increasing use of smartphones and tablets. Live and learn: Everybody went mobile in 2012 (or so it seemed), but the most groundbreaking movement on the Web may have been the rise of digital education. For all the attention lavished on the Web’s growth on mobile devices this year, one of the most interesting Internet trends is still best experienced on a desktop computer: online education. The rising cost of higher education (the average bachelor’s degree now costs more than $100,000), combined with increasing access to high-speed Internet service and a desire for more efficient and flexible learning methods, brought new prominence to websites offering free or low-priced courses in everything from programming to literature. Free online code-learning startup Codecademy’s effort to teach novices to code snagged more than 400,000 participants for its weekly lessons in JavaScript, HTML, and CSS. Another segment of the Web that experienced major changes in 2012 was social networking.

Free Online Student Organizer | Schoolbinder Connectivism: A Learning Theory for the Digital Age Connectivism: A Learning Theory for the Digital Age December 12, 2004 George Siemens Update (April 5, 2005): I've added a website to explore this concept at www.connectivism.ca Introduction Behaviorism, cognitivism, and constructivism are the three broad learning theories most often utilized in the creation of instructional environments. Learners as little as forty years ago would complete the required schooling and enter a career that would often last a lifetime. “One of the most persuasive factors is the shrinking half-life of knowledge. Some significant trends in learning: Many learners will move into a variety of different, possibly unrelated fields over the course of their lifetime. Background Driscoll (2000) defines learning as “a persisting change in human performance or performance potential…[which] must come about as a result of the learner’s experience and interaction with the world” (p.11). Driscoll (2000, p14-17) explores some of the complexities of defining learning. Conclusion: