Why is a good man so hard to find? Blame the war on boys and men. Gina Thibodeaux, as Hannah Frishberg’s Post feature this week noted, is a single woman seeking a male partner in New York, preferably for marriage. 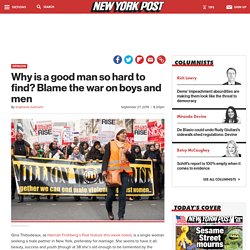 She seems to have it all: beauty, success and youth (though at 38 she’s old enough to be tormented by the ticking of her biological clock). Alas, she says her luck with men has been so bad, she’s now considering living communally with girlfriends. “Dudes these days just do less across the board,” she says. Why Are Marriage Rates Down? Study Blames Lack Of 'Economically-Attractive' Men. ITHACA, N.Y. — Marriage rates have steadily declined over the past few decades, and now researchers from Cornell University are offering up a possible explanation: there just aren’t as many economically-attractive men for unmarried women to meet as there used to be. 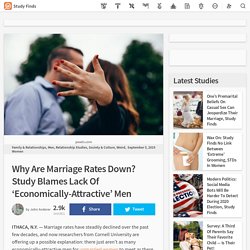 Previous studies had attempted to answer why marriage rates are on the decline, but most focused solely on gender ratio discrepancies as opposed to looking into the specific socioeconomic characteristics that make a particular man and woman a good match. First, the study’s authors examined data collected on recent marriages between 2007-2012 and 2013-2017, gathered as part of the American Community Survey’s cumulative 5-year marriage statistics. ‘Judges Are the Single Biggest Cause of Fatherlessness’ Biology Culture Ideology. Marriage; An Addendum. Major Risk Factor for Divorce: the Man Losing His Job. September 15, 2016 by Robert Franklin, Esq, Member, National Board of Directors, National Parents Organization. 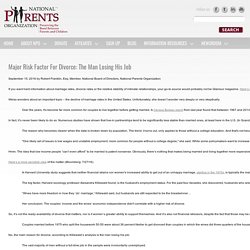 Don’t Blame Divorce on Money. Ask: Did the Husband Have a Job? Financial stress and fights over money can eat away at a marriage. 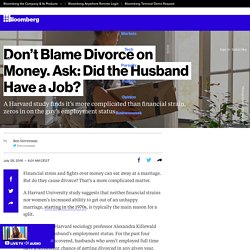 But do they cause divorce? That’s a more complicated matter. A Harvard University study suggests that neither financial strains nor women's increased ability to get out of an unhappy marriage, starting in the 1970s, is typically the main reason for a split. The big factor, Harvard sociology professor Alexandra Killewald found, is the husband's employment status. For the past four decades, she discovered, husbands who aren’t employed full time have a 3.3 percent chance of getting divorced in any given year, compared with 2.5 percent for husbands employed full time.

There's a Painfully Obvious Reason Fewer Cohabiting Couples Are Getting Hitched. Over the years, it's become far more common for couples to live together before getting married. 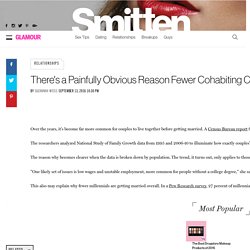 A Census Bureau report from last year found that between 1967 and 2014, the share of Americans over 18 living with an unmarried partner went from virtually zero to nearly one tenth, while the proportion of those living with a spouse declined from around 70 to 50 percent. But according to a new study in Demography, living together is less likely to lead to marriage than it used to be. The researchers analyzed National Study of Family Growth data from 1995 and 2006-10 to illuminate how exactly couples' living patterns and relationships have changed throughout the years. Are reluctant men to blame for so many women being childless? Record numbers are never becoming mothers – and not by choice. This article could be called Women affected by feminism as the “singer” Taylor Swift. 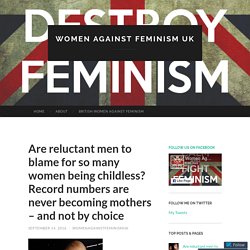 Read below: A kind, funny, handsome husband. Anti-Feminism Writer Suzanne Venker: Feminism Has Eliminated All Of Men's Incentives To Marry. Longtime critic of feminism Suzanne Venker claimed in a recent column that feminism and contemporary sexual mores have eliminated men's incentives to marry. 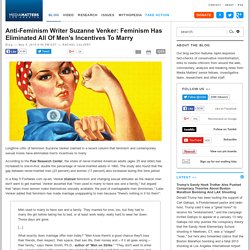 According to the Pew Research Center, the share of never-married American adults (ages 25 and older) has increased to one-in-five; double the percentage of never-married adults in 1960. The study also found that the gap between never-married men (23 percent) and women (17 percent) also increased during this time period. This is the end of marriage, capitalism and God. Finally! 8 reasons straight men don’t want to get married.

Note: This piece is also available in Romanian and Spanish. 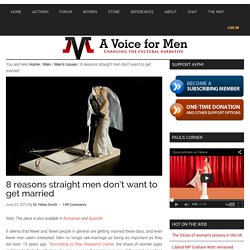 It seems that fewer and fewer people in general are getting married these days, and even fewer men seem interested. Men no longer see marriage as being as important as they did even 15 years ago. “According to Pew Research Center, the share of women ages eighteen to thirty-four that say having a successful marriage is one of the most important things in their lives rose nine percentage points since 1997–from 28 percent to 37%. For men, the opposite occurred. The share voicing this opinion dropped, from 35 percent to 29 percent.” A College Education Might Be The Thing Standing Between You And Marriage. Blame the drop in marriage rates on declining American values, and you may be ignoring what often provides the push for couples to walk down the aisle: education. 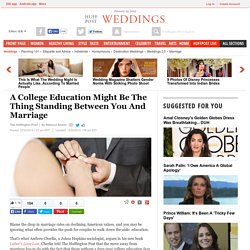 Half of 20-year-olds will never marry in 'devastating' trend. Half of forty year olds today are already married, but they are not expected to reach the levels of set by their parents. 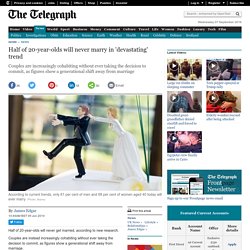 According to current trends, only 61 per cent of men and 68 per cent of women aged 40 today will ever marry – a decline of 26 per cent for men and 24 per cent for women. However, the greatest decline in marriage has taken place among those in their twenties. In 1970, the peak year for marriage, 564,818 men and women aged 25 got married. In 2010, just 56,598 did, a fall of 90 per cent. Causes of Low Marriage Rates. Wedding Poker: How Women Start the Marriage Strike and Men Complete It. [Guest Post by Nemesis, a frequent participant at JFG who will be making more guest posts in the coming weeks and months.] Today, there is no doubt that Americans are delaying marriage. However, there is significant disagreement as to whether it is women or men that are driving this delay and decline in marriage.

This analysis suggests that women are more to blame than men. Many feminists celebrate the delay of marriage as liberation for young women. Modern Marriage Economics, for men and women. Are Men Irrational For Opting Out Of Education, Careers And Families? Men Are 'On Strike' Throughout The U.S.: What Are The Causes?m. Psychologist and blogger Helen Smith. (Photo credit: Wikipedia) I haven’t seen my copy of Men On Strike for several weeks. I kept careful watch on the book until I finished interviewing her, but after that it disappeared into the Bowyer-Family-Book-Sharing Vortex from which it has not yet emerged. That’s because it is an easy read about a topic which is interesting in both a social science theory way, and in a figuring out how to get by in the current world kind of way. Men on Strike is pretty much what the title says it is, a book about how many men have decided not to participate in certain areas of life, most notably in school, family, and increasingly in work.

The controversy has erupted in another quarter, namely in a series of blog and counter blog salvos between the aforementioned Hymowitz and the popular Best of the Web Today blog authored by James Taranto of the Wall Street Journal.