Catholic Family Services. Catholic Teaching on Marriage and Communion is Unambiguous. Blogs | Dec. 12, 2016 The Church teaching that the divorced and civilly remarried may not receive Holy Communion remains unchanged. 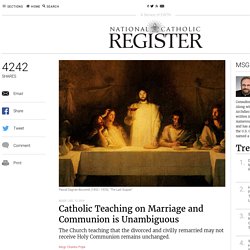 Msgr. Charles Pope I have received, from many of God’s faithful, requests for advice on how to understand the growing storm in the Church on the subject of marriage — and in particular on the subject of Communion for the divorced and civilly remarried. There are theologians and canonists who are better able to speak to the details and to the possible scenarios if Pope Francis continues to remain silent on this matter, but as a pastor of souls I feel that I must provide an answer. First, I want to affirm my support for the cardinals (Walter Brandmüller, Raymond Burke, Carlo Caffarra, and Joachim Meisner) who sent five questions (called dubia) to Pope Francis requesting clarification on some key parts of his post-synodal exhortation, Amoris Laetitia. Despite what others may have said, I must answer, “No.” What follows is a further explanation of my answer. I. Declaration of Fidelity to the Church’s Unchangeable Teaching on Marriage and to Her Uninterrupted Discipline. “Let marriage be honored among all” (Heb. 13: 4) We live in an age when numerous forces seek to destroy or deform marriage and the family. 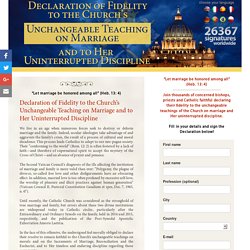 Indeed, secular ideologies take advantage of and aggravate the family’s crisis, the result of a process of cultural and moral decadence. This process leads Catholics to adapt to our neo-pagan society. Their “conforming to the world” (Rom. 12: 2) is often fostered by a lack of faith—and therefore of supernatural spirit to accept the mystery of the Cross of Christ—and an absence of prayer and penance. The Second Vatican Council’s diagnosis of the ills affecting the institution of marriage and family is more valid than ever: “Polygamy, the plague of divorce, so-called free love and other disfigurements have an obscuring effect.

II. “It comes to pass that, while [the pastors of souls] delight in being hustled by worldly tumults, they are ignorant of the things that are within, which they ought to have taught to others. Roman Catholic Diocese of Lafayette, Louisiana (Lafayette, Louisiana) Event Name: The Catholic Divorce Recovery Program Date: Apr 6, 2014 Time: 4:00 PM - 6:00 PM The Office of Marriage and Family Life is pleased to announce the beginning of an exciting new ministry to men and women who have suffered from divorce, The Catholic Divorce Recovery program. 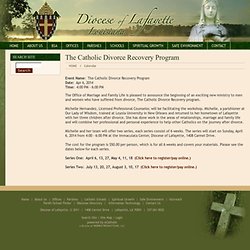 Michelle Hernandez, Licensed Professional Counselor, will be facilitating the workshop. Michelle, a parishioner at Our Lady of Wisdom, trained at Loyola University in New Orleans and returned to her hometown of Lafayette with her three children after divorce. She has done work in the areas of relationships, marriage and family life and will combine her professional and personal experience to help other Catholics on the journey after divorce. Michelle and her team will offer two series, each series consist of 6 weeks. The cost for the program is $50.00 per person, which is for all 6 weeks and covers your materials. Divorce (In Moral Theology) See also DIVORCE IN CIVIL JURISPRUDENCE. 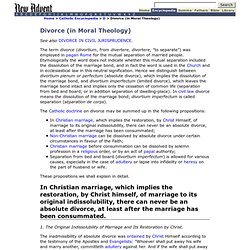 The term divorce (divortium, from divertere, divortere, "to separate") was employed in pagan Rome for the mutual separation of married people. Etymologically the word does not indicate whether this mutual separation included the dissolution of the marriage bond, and in fact the word is used in the Church and in ecclesiastical law in this neutral signification. Hence we distinguish between divortium plenum or perfectum (absolute divorce), which implies the dissolution of the marriage bond, and divortium imperfectum (limited divorce), which leaves the marriage bond intact and implies only the cessation of common life (separation from bed and board, or in addition separation of dwelling-place).

In civil law divorce means the dissolution of the marriage bond; divortium imperfectum is called separation (séparation de corps). The Catholic doctrine on divorce may be summed up in the following propositions: 1. 2. 3. Pope Paul VI Institute for the Study of Human Reproduction. Marriage Help Program For Couples. About the Assessment - PREPARE/ENRICH - What is PREPARE/ENRICH. Pope: Marriage cannot be based simply on emotional satisfaction. Pope Francis holds an audience with students from Jesuit-run schools in Italy and Albania in Paul VI Hall June 7, 2013. 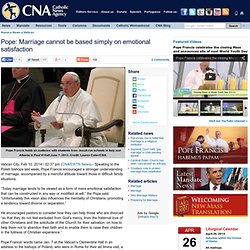 Credit: Lauren Cater/CNA. Vatican City, Feb 10, 2014 / 02:37 pm (CNA/EWTN News).- Speaking to the Polish bishops last week, Pope Francis encouraged a stronger understanding of marriage, accompanied by a merciful attitude toward those in difficult family situations. “Today marriage tends to be viewed as a form of mere emotional satisfaction that can be constructed in any way or modified at will,” the Pope said. “Unfortunately this vision also influences the mentality of Christians, promoting a tendency toward divorce or separation.” Pope Francis’ words came Jan. 7 at the Vatican’s Clementine Hall in an address to the bishops of Poland, who were in Rome for their ad limina visit, a trip that bishops must make every five years to discuss the state of their dioceses with the Pope.

The Holy Father had begun his address looking forward to the April 27 canonization of Bl.