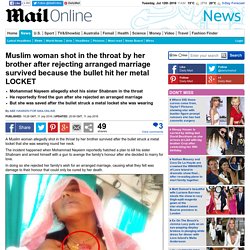 Yemeni child bride, eight, dies of internal injuries on first night of forced marriage to groom five times her age. 'Rawan' died in the tribal area of Hardh, which borders Saudi ArabiaActivists have called for groom and family to be arrested over her deathOne activist: 'Groom is an animal who deserved to be punished severely' By Matt Blake Published: 09:20 GMT, 9 September 2013 | Updated: 12:02 GMT, 23 October 2013 An eight-year-old child bride has died in Yemen of internal bleeding sustained during her wedding night after being forced to marry a man five times her age, activists have claimed. 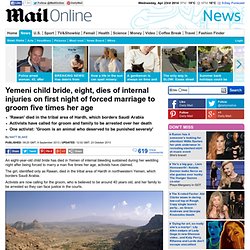 The girl, identified only as Rawan, died in the tribal area of Hardh in northwestern Yemen, which borders Saudi Arabia. Nada Al-Ahdal: Escaped Yemeni child bride, 11, explains why she ran away from home. Nada al-Ahdal was saved from the forced engagement by her uncleHe told her suitor that she 'was no good for him and did not wear a veil' The practice of marrying young girls is widespread in Yemen By Jill Reilly Published: 09:16 GMT, 22 July 2013 | Updated: 15:51 GMT, 22 July 2013 A harrowing video has been posted on online of an 11-year-old Yemeni girl who claims she ran away to escape an arranged marriage. 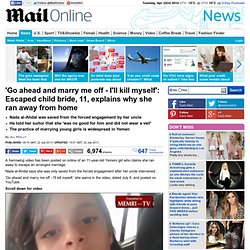 Nada al-Ahdal says she was only saved from the forced engagement after her uncle intervened. 'Go ahead and marry me off - I'll kill myself,' she warns in the video, dated July 8, and posted on YouTube. Scroll down for video Difficult viewing: A harrowing video has been posted on YouTube of an 11-year-old Yemeni girl explaining how she escaped an arranged marriage. 'I was forced to marry at 13... then my husband's family hired a hitman to kill me for £50 after I fell pregnant': Incredible life story of schoolgirl given away to a stranger in Pakistan.

Sameem Ali taken from Glasgow to Pakistan aged just 13 to marry strangerSchoolgirl told she was allowed to return home only if she was pregnantOnce pregnant she was brought back to help her husband's visa applicationBut when she escaped her brother hired four hit men to try and kill herEventually broke free and lived in homeless hostel in Manchester Now 44 year-old Sameem is happily married and has cut all ties with familyShe is sharing her story for new initiative 'Glasgow Life' the new. 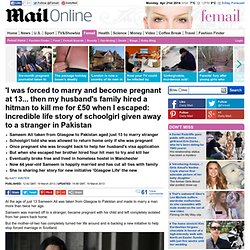 International Day of the Girl Child 2012: Devastating images show the terrifying world of child brides. By Snejana Farberov Published: 03:59 GMT, 12 October 2012 | Updated: 13:45 GMT, 12 October 2012 At age 11, Ghulam was married off to 40-year-old Jaiz in a rural Afghan village, making her only one of more than 10 million young girls who are being forced to wed men old enough to be their fathers or grandfather every year. 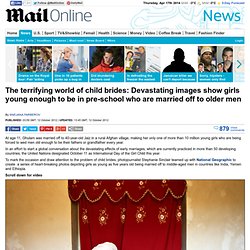 In an effort to start a global conversation about the devastating effects of early marriages, which are currently practiced in more than 50 developing countries, the United Nations designated October 11 as International Day of the Girl Child this year. To mark the occasion and draw attention to the problem of child brides, photojournalist Stephanie Sinclair teamed up with National Geographic to create a series of heart-breaking photos depicting girls as young as five years old being married off to middle-aged men in countries like India, Yemen and Ethiopia. Scroll down for video Vulnerable: Young girls sit inside a home outside of Al Hudaydah, Yemen, in 2010.

Forced marriages finally criminalised. Is forced marriage finally on the way out? Home Secretary, Teresa May, has announced that parents who force their children to marry in England and Wales could be jailed for up to five years. The announcement follows a Home Office consultation that ended in March, launched by David Cameron. Teresa May also announced £500 ,000 in funding to help schools and other agencies to spot early signs of forced marriages.

When I first heard this news, I was slightly taken back because I thought that forced marriages were already illegal. Alas, I was wrong but still slightly surprised by the fact that successive British governments had taken so long to outlaw this unfair and vile practice. Forced marriages are still fairly commonplace in communities in Britain that hail from South Asia, the Middle East and Africa. The notion that parents have the exclusive right and duty to select future life partners for their children is completely absurd by modern standards. Disabled Muslim woman's forced marriage is not valid in Britain rules judge who says she does not have ability to consent. By Helen Lawson Published: 17:42 GMT, 16 August 2012 | Updated: 18:14 GMT, 16 August 2012 A top family judge has opened the way for the annulment of a disabled Muslim woman’s 'forced marriage' despite her parents’ plea that it will bring shame on her and her family. 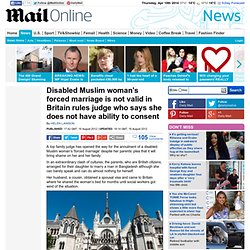 In an extraordinary clash of cultures, the parents, who are British citizens, arranged for their daughter to marry a man in Bangladesh although she can barely speak and can do almost nothing for herself. Her husband, a cousin, obtained a spousal visa and came to Britain where he shared the woman’s bed for months until social workers got wind of the situation. Mrs Justice Parker ruled that DD's marriage could not be recognised in English law, but acknowledged the parents of DD were 'devoted' to their daughter Police obtained a forced marriage protection order and the husband was warned that any sexual relations with the woman was likely to amount to a criminal offence. Teenage boy saves himself from forced marriage by texting Indian authorities to report his family. 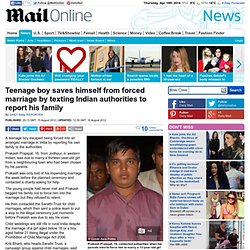 Muslim preacher who tried to strangle his daughter, 16, for refusing an arranged marriage to her cousin escapes jail. Abid Hussain grabbed his daughter around the neck after she rejected wedding plansHer two brothers were also convicted of assault All three were handed suspended jail terms. 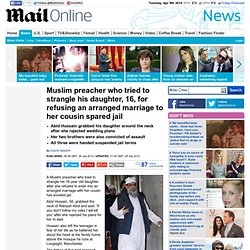 Muslim grandmother who kidnapped and drugged her own daughter because she wouldn't marry the 'right' man is jailed. Shamim Akhtar, 59, jailed for four years for abusing Naila Afsar out of 'some misplaced sense of warped family honour'Her son, Shamrez Khan, and son-in-law, Zahid Mahmood, were also jailed By Graham Smith Published: 17:59 GMT, 27 July 2012 | Updated: 18:40 GMT, 27 July 2012. 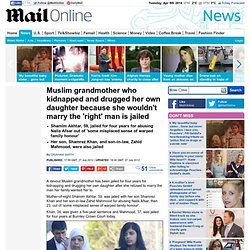 Khap 'lesson' for a defiant teacher. By Mail Today Reporter Published: 18:55 GMT, 19 June 2012 | Updated: 22:01 GMT, 19 June 2012 A Khap panchayat of the Meena community (a scheduled tribe) in Rajasthan has ordered the abduction of a schoolteacher because she has refused to accept the man she was married off to as a child. 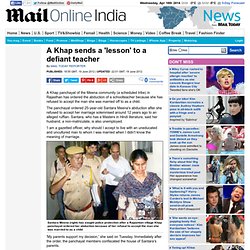 Moroccan girl, 16, kills herself after judge forced her to marry man who RAPED her. Online petition after case of teen who swallowed rat poison in protestWomen's rights activist describes horror as 'recurring phenomenon''Law protects public morality but not the individual' 475: When Marriage Becomes Punishment by Nadir Bouhmouch. STATUS: In post-production! In March of 2011, a 16 year old girl named Amina Filali committed suicide by swallowing rat poison. A year earlier, Amina was raped and forced to marry her rapist by a Moroccan judge who cited Article 475 of the Moroccan Penal code. This law is wrongly used to force young girls to marry their rapists, thus saving the "honor of the family".

And while it does not touch on the case of rape in itself, this law is usually the one to be applied by the judges, for it is the only one that cancels all charges provided the plaintiff is married to the defendant.