July 2013. This article features in Episode 14 of the Australian Social Trends Podcast series.Listen to the episode, or subscribe to the series, here , or via Source: 2011 Census of Population and Housing. 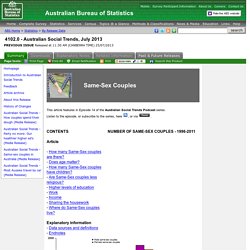 What are the benefits of same-sex marriage? 12 Reasons Why Marriage Equality Matters (click to expand) Australia’s ban on same-sex marriage doesn’t only disadvantage those same-sex partners who seek to marry. 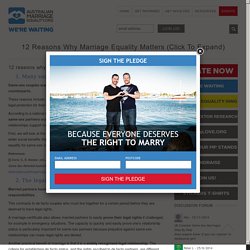 It disadvantages all same-sex attracted Australians, including those who are not in a relationship, or who would not marry, even if they could. It does this by treating them as legally unequal to their heterosexual counterparts, and by not allowing them the same life choices. Governments restrictions on who gay and lesbian Australians can marry violates their fundamental human rights in the same way the rights of Aboriginal Australians of African Americans were once violated by laws which prevented from marrying who they wished.

Gay Marriage Around the World. Updated September 2, 2014 Navigate this report: A growing number of governments around the world are considering whether to grant legal recognition to same-sex marriages. 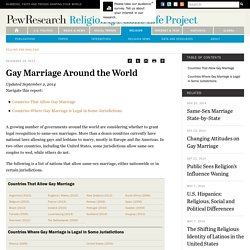 More than a dozen countries currently have national laws allowing gays and lesbians to marry, mostly in Europe and the Americas. In two other countries, including the United States, some jurisdictions allow same-sex couples to wed, while others do not. Same-sex marriage status in the United States. How many same-sex marriages in the U.S.? At least 71,165, probably more.

Today, the Supreme Court struck down the Defense of Marriage Act’s key section, which prohibited federal recognition of same-sex marriages and denied same-sex couples who were married under state law a panoply of federal benefits — from favorable tax treatment to the ability to be buried together in veterans’ cemeteries — that are available to opposite-sex married couples. 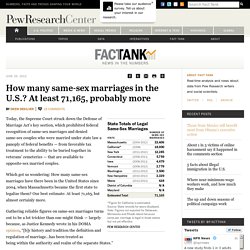 Which got us wondering: How many same-sex marriages have there been in the United States since 2004, when Massachusetts became the first state to legalize them? Our best estimate: At least 71,165, but almost certainly more. Gathering reliable figures on same-sex marriages turns out to be a lot trickier than one might think — largely because, as Justice Kennedy wrote in his DOMA opinion, “[b]y history and tradition the definition and regulation of marriage…has been treated as being within the authority and realm of the separate States.”

California presents a special case. Supreme Court allows gay marriage to proceed in South Carolina. Gay marriage and the future of human sexuality – Opinion – ABC Religion & Ethics. The controversy surrounding gay marriage has now reached a fever pitch in countries like Australia and the UK, as governments have begun to move past debate and towards legislative change. 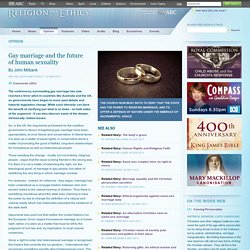 While such intensity can have the benefit of clarifying just what is at stake - on both sides of the argument - it can also obscure some of the deeper, intrinsically related issues. So, in the UK, the arguments put forward by the coalition government in favour of legalising gay marriage have been, appropriately, at once liberal and conservative. In liberal terms it is seen as a matter of equal rights; in conservative terms a matter of promoting the good of faithful, long-term relationships for homosexual as well as heterosexual people. 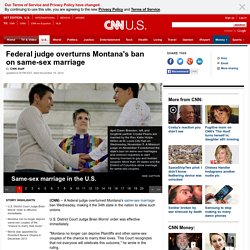 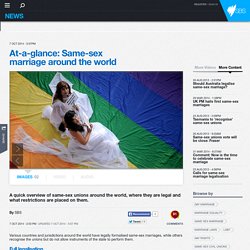 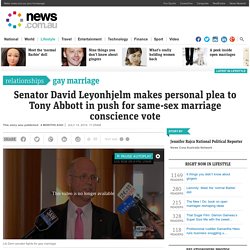 Courtesy Browne Snake Removals. Amateur footage has emerged of an altercation in a Brisbane shopping centre in which a disabled man is seen to be pinned down by police Alan Kohler interviews the CEO of wind power provider Infigen on the impact of the Renewable Energy Target. Westpac's Senior International Economist Huw McKay on what the FTA will mean for Australian business. New amateur footage has emerged of the immediate aftermath of the Malaysia Airlines MH17 crash in eastern Ukraine in which all 298 people onboard were killed. As reported by A Current Affair.

Fox Sports AFL Correspondent Julian De Stoop fills us in on the latest in the Essendon scandal, with 34 past and current players being issued with infraction notices. Family ties ... Poll shows growing support for same-sex marriage. Senator's bid to legalise same-sex marriage Senator David Leyonhjelm will introduce a private member's bill to legalise gay marriage...and has marijuana and assisted suicide in his sights too. 14, 2014 Liberal Party polling found that 72 per cent want same-sex marriage legalised, while 77 per cent think Coalition MPs should be granted a conscience vote on the matter. 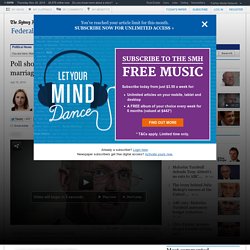 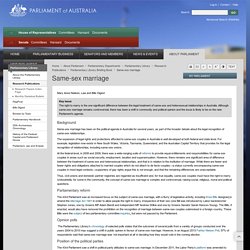 Gay Marriage: The Tide Has Turned. Will the Supreme Court Listen?  The Supreme Court may soon be pushed, however reluctantly, to address the question of whether there's a constitutional right to same-sex marriage. So far, it has punted on the issue. But last week, gay and lesbian couples filed petitions asking the court to rule on the matter now that federal appeals courts have issued contradictory decisions.

They hope the court will hear their case before the current session ends in June.