How Same-Sex Marriage is Seen Through the Media

Same Sex Marriage. How Much More Popular is Same-Sex Marriage Today Than in 1989? Same-sex Marriage is an Equality Issue. “[T]he freedom to marry has long been recognized as one of the vital personal rights essential to the orderly pursuit of happiness by free men.” Loving v. Virginia, 388 U.S. at 12 (1967) Generally speaking states get to decide who can marry. For example, New Hampshire, along with eight other states and Washington, D.C., have passed laws that recognize same-sex marriage. What people using the #samesexmarriage hashtag have to say via Twitter. President Obama - "Gay Couples Should Be Able to Get Married"- ABC NEWS EXCLUSIVE. Awesome Marriage Equality Ad in Ireland. Home Depot Marriage Proposal. Yep, Ellen is Gay - Her Gay Marriage Announcement.

MACKLEMORE & RYAN LEWIS - SAME LOVE feat. MARY LAMBERT (OFFICIAL VIDEO) History was Made During Live Performance of "Same Love" Macklemore hit the stage at the Staples Center on Sunday (Jan. 26) for a performance at the 56th annual Grammy Awards. 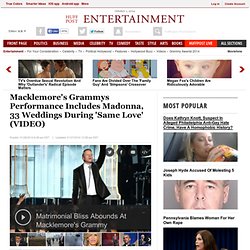 The 30-year-old rapper was joined for the gig by his producing partner, Ryan Lewis, and singer Mary Lambert to play the hit single "Same Love. " The performance was taken to another level with the addition of Madonna, who lent her vocals to the "Heist" track by transitioning into a rendition of "Open Your Heart. " Hours before the show, news leaked that Macklemore and Madonna's performance would host the marriage ceremonies of 33 couples, to be officiated by Queen Latifah.

"Same Love" was nominated for Song of the Year at the awards show. Macklemore and Ryan Lewis were also nominated for Best New Artist, Album of the Year and Best Rap Album for "The Heist," Best Rap Performance and Best Rap Song for "Thrift Shop" and Best Music Video for "Can't Hold Us. " The 2014 Grammys are the first time Macklemore and Ryan Lewis have been nominated for awards from The Recording Academy. Jason Collins Makes History As First Openly Gay NBA Player. Opponents of Gay Marriage Think Their Own Union Is Unshakable. Opponents of same-sex marriage worry that extending the institution's rights to gay people will harm heterosexual marriages. 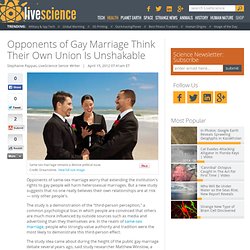 But a new study suggests that no one really believes their own relationships are at risk — only other people's. The study is a demonstration of the "third-person perception," a common psychological bias in which people are convinced that others are much more influenced by outside sources such as media and advertising than they themselves are. Gay Couples React to Anti-Gay Marriage Ads. Wave Of Anti-Gay Attacks in NYC.

NEW YORK (CBSNewYork/AP) — Concern and fear have been on the rise amid a spike in anti-gay violence in Manhattan, including a cold-blooded killing in Greenwich Village over the weekend. 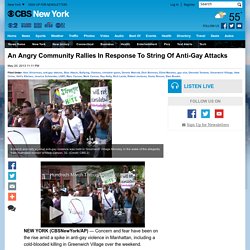 As CBS 2’s Dick Brennan reported Monday, the latest victim, 32-year-old Mark Carson, was shot and killed early Saturday morning by a man who first called him and his partner “f***ots” and asked if they were “gay wrestlers.” Now, the community is rallying against hate, and police are increasing patrols in some neighborhoods – in the wake of five anti-gay attacks in the past two weeks. “We’re angry, and we want our leaders to lead and change the situation,” said Jordan Friedman of the West Village. An Angry Community Rallies In Response To String Of Anti-Gay Attacks WCBS 880's Alex Silverman Reports Hundreds of people gathered Monday evening for a rally against hate at the Lesbian, Gay, Bisexual & Transgender Community Center, at 208 W. 13th St. “Everybody’s talking about hate,” Doug said. Documentary: "The Problem with Same-Sex Marriage" 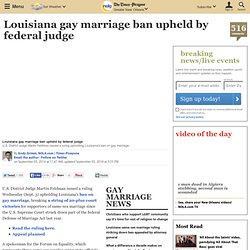 District Judge Martin Feldman issued a ruling Wednesday (Sept. 3) upholding Louisiana's ban on gay marriage, breaking a string of 20-plus court victories for supporters of same-sex marriage since the U.S. Supreme Court struck down part of the federal Defense of Marriage Act last year. A spokesman for the Forum on Equality, which represents three same-sex couples suing state officials over the ban, said the plaintiffs will appeal Feldman's ruling to the 5th U.S. My Own Mother Tried to Scare Me Out of Being "Who I'm Supposed To Be" Note: This segment contains strong language that may not be appropriate for all audiences. 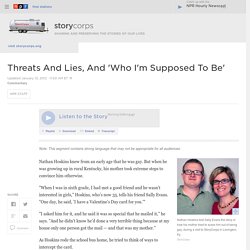 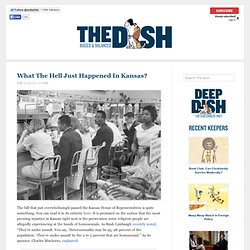 You can read it in its entirety here. It is premised on the notion that the most pressing injustice in Kansas right now is the persecution some religious people are allegedly experiencing at the hands of homosexuals. As Rush Limbaugh recently noted, “They’re under assault. You say, ‘Heterosexuality may be 95, 98 percent of the population.’ They’re under assault by the 2 to 5 percent that are homosexual.” Discrimination is horrible. The remedy for such a terrible threat is, however, state support for more discrimination. THE CASE AGAINST 8 an HBO Documentary. Same-sex Marriage Sanity. What is the rational basis for laws that deprive gay and lesbian couples of the right to wed? 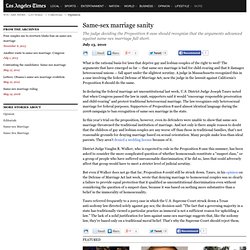 The arguments that have emerged so far — that same-sex marriage is bad for child-rearing and that it damages heterosexual unions — fall apart under the slightest scrutiny. A judge in Massachusetts recognized this in a case involving the federal Defense of Marriage Act; now the judge in the lawsuit against California's Proposition 8 should do the same.