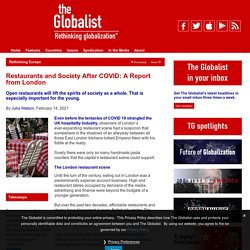 Surely there were only so many handmade pasta counters that the capital’s restaurant scene could support. The London restaurant scene Until the turn of the century, eating out in London was a predominantly expense account business. High end restaurant tables occupied by denizens of the media, advertising and finance were beyond the budgets of a younger generation. But over the past two decades, affordable restaurants and chains have blossomed in every British city center. 8 Intelligences: Are You a Jack of All Trades or a Master of One? With Howard Gardner. China's gateway to Europe – the New Silk Road. 52 Future Degrees Colleges Are Not Offering Yet.

I was thoroughly intrigued when I found out the Colorado School of Mines in Golden, Colorado was offering a degree in asteroid mining. 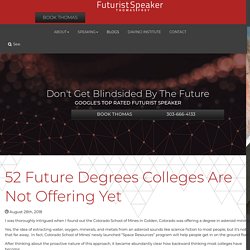 Yes, the idea of extracting water, oxygen, minerals, and metals from an asteroid sounds like science fiction to most people, but it’s not that far away. In fact, Colorado School of Mines’ newly launched “Space Resources” program will help people get in on the ground floor. After thinking about the proactive nature of this approach, it became abundantly clear how backward thinking most colleges have become. When colleges decide on a new degree program, they must first recruit instructors, create a new curriculum, and attract students. James Buchanan the Economist Behind the One Percent’s Stealth Takeover of America. Nobel laureate James Buchanan is the intellectual linchpin of the Koch-funded attack on democratic institutions, argues Duke historian Nancy MacLean Ask people to name the key minds that have shaped America’s burst of radical right-wing attacks on working conditions, consumer rights and public services, and they will typically mention figures like free market-champion Milton Friedman, libertarian guru Ayn Rand, and laissez-faire economists Friedrich Hayek and Ludwig von Mises. 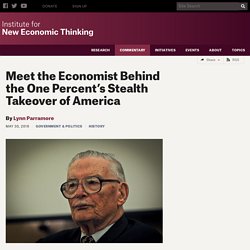 James McGill Buchanan is a name you will rarely hear unless you’ve taken several classes in economics. And if the Tennessee-born Nobel laureate were alive today, it would suit him just fine that most well-informed journalists, liberal politicians, and even many economics students have little understanding of his work. The reason? Glenn Greenwald on the Amazon fires and the fight for Brazil's future. MgO China Price Drop - Cleanup. China is proceeding at full steam in its programme to rid the country of highly-polluting and obsolete industrial practices in a bid to improve the environmental footprint of its operations with the focus of local authorities now shifting towards magnesia. 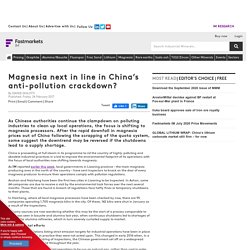 As IM reported earlier this week, local governments in Liaoning province – the main magnesia producing area in the north of the country – have sent inspectors to knock on the door of every magnesia producer to ensure their operations comply with pollution regulations. Is UV light safe? The truth about disinfecting air. West Sacramento farm grows with eye on social justice.

The COVID-19 pandemic has caused the deferral of so many dreams, and it has hit young businesses particularly hard. 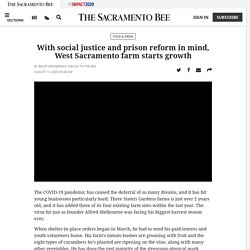 Three Sisters Gardens farms is just over 2 years old, and it has added three of its four existing farm sites within the last year. The virus hit just as founder Alfred Melbourne was facing his biggest harvest season ever. How To Survive a Pandemic - amazon. Quitting Your Job to Farm Seeds For a Living? □ It Is Time to Abandon Dollar Hegemony. In the 1960s, French Finance Minister Valéry Giscard d’Estaing complained that the dominance of the U.S. dollar gave the United States an “exorbitant privilege” to borrow cheaply from the rest of the world and live beyond its means. 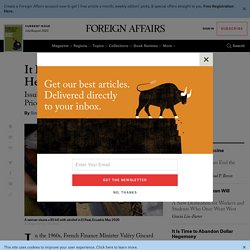 U.S. allies and adversaries alike have often echoed the gripe since. But the exorbitant privilege also entails exorbitant burdens that weigh on U.S. trade competitiveness and employment and that are likely to grow heavier and more destabilizing as the United States’ share of the global economy shrinks. The benefits of dollar primacy accrue mainly to financial institutions and big businesses, but the costs are generally borne by workers. For this reason, continued dollar hegemony threatens to deepen inequality as well as political polarization in the United States. Ava DuVernay. The high cost of free parking. Reframe Confederate monuments - Oklahoma State University students harness design to respond. Science Denial, & Communication To Solve It by Cleantech Talk. ‘Retail apocalypse’ now: Analysts say 75,000 - 100,000 more U.S. stores could be doomed.

How a farmer turned 90 acres of wasteland into a lush green forest in Odisha. Trauma vs. Existential Pain - Bonnita Roy. Digging Deep Reveals the Intricate World of Roots. If you’ve ever driven past wild prairie grasses swaying in the Kansas breeze and felt a wave of appreciation for America’s heartland, you should know that those visible grasses are just the tip of the iceberg. 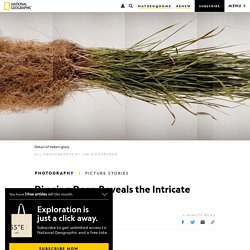 “We’re pretty blind to what’s going on beneath the soil,” says photographer Jim Richardson, who became well acquainted with the world of dirt while working on “Our Good Earth,” a 2008 National Geographic magazine story. The bulk of a prairie grass plant, it turns out, exists out of sight, with anywhere from eight to fourteen feet of roots extending down into the earth. Why should we care? Besides being impressively large, these hidden root balls accomplish a lot—storing carbon, nourishing soil, increasing bioproductivity, and preventing erosion.

Antifragile Investing: How to Profit From Uncertainty. We Don’t Need One Big Plan to End the Lockdown – AIER. Art Carden – May 15, 2020 During periods of great uncertainty, it is customary to hear calls for someone “with a plan.” 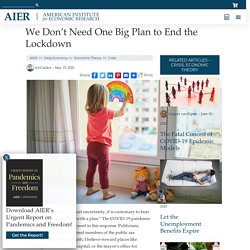 The COVID-19 pandemic has, of course, been no different in this response. Politicians, commentators, and frightened members of the public are looking–with misplaced faith, I believe–toward places like Washington, DC, the state capital, or the mayor’s office for someone with a clear, articulated solution that will put all this behind us. Struggling Farmers Are Selling Midwest Hogs Ad Hoc and Online. In mid-May, an ad in the Northwest Livestock & Equipment Classifieds Facebook group featured a photo of four pink pigs huddled together in Junction City, Oregon. 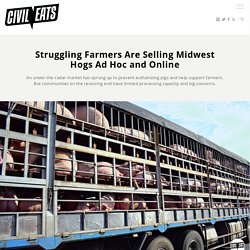 “Butcher ready pork from the Midwest. We are bringing them out to help keep them from being euthanized and put in the landfills,” read the ad. In the comments below, a number of enthusiastic people expressed interest in buying the animals. Ubiquity University: Accredited Global University for Social Impact. Forged from the Future: the Ubiquity Experiment. The Garden Awakening. Study shows feasibility of handheld UV COVID-19 killer. A handheld device that emits high-intensity ultraviolet light to disinfect areas from bacteria and viruses such as COVID-19 is now feasible, claim researchers in the US and Japan. 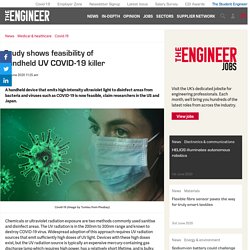 Chemicals or ultraviolet radiation exposure are two methods commonly used sanitise and disinfect areas. The UV radiation is in the 200nm to 300nm range and known to destroy COVID-19 virus. Widespread adoption of this approach requires UV radiation sources that emit sufficiently high doses of UV light. Devices with these high doses exist, but the UV radiation source is typically an expensive mercury-containing gas discharge lamp which requires high power, has a relatively short lifetime, and is bulky. The solution is to develop high-performance, UV light emitting diodes, which would be far more portable, long-lasting, energy efficient and environmentally benign. The Sickness in Our Food Supply. That Uplifting Tweet You Just Shared? A Russian Troll Sent It.

Internet trolls don’t troll. Not the professionals at least. Professional trolls don’t go on social media to antagonize liberals or belittle conservatives. They are not narrow minded, drunk or angry. They don’t lack basic English language skills. Tru-D - The Gold Standard in UV Disinfection. Ultraviolet Germicidal Irradiation Fundamentals and Indoor Environment Applications. Neither a rigged market nor Vera Lynn will pick the crops. The crop picking crisis is revealing the fundamental failures of free-market capitalism and invoking national spirit won't fix it, argues Kevin Ovenden In a recent Guardian article 'Farms still need up to 40,000 UK workers to harvest fruit and veg' are details that raise some profound questions about which socialists have convincing points to make and answers to give. A running issue in the piece is that while there has been a response from UK-based workers to meet the demand for agricultural labour, big farmers are worried that even those who have taken up work will just switch to what they feel are better jobs (pay, conditions, compatibility with their lives) when other parts of the economy open up.

So the complaint is - when you strip it down - that workers will behave like the perfect individual economic actor of capitalist ideology. That is: they will withhold or sell their commodity - their capacity to work - according to supply and demand and maximising individual return. Italians Can Now Install Rooftop Solar PV Systems For Free. Batteries Published on May 23rd, 2020 | by Cynthia Shahan May 23rd, 2020 by Cynthia Shahan The Italian government had one of the early invasive experiences of the covid-19 pandemic. Scientists in Italy responded to the global crisis with serious research into the concern. Perhaps results of these inquiries and related information have affected policy makers. Rooftop solar panels. Robust Clean Energy Jobs Will Be a Hallmark of the Recovery Ahead.

It’s hard to image that 150 years ago Americans were hunting whales for oil to light homes. When Moby Dick was first published in the mid-1800s, whale oil demand was at its peak. It was the fifth-largest sector of the economy. Fifty years later, the industry was dead. Whale oil was fully displaced by petroleum thanks to the entrepreneurial spirit of Edmund Drake. At about the same time, coal was replacing wood in homes and businesses because coal is more energy dense and could be moved around easier. New flow battery could help unlock renewable energy. USC scientists have developed a new battery that could solve the electricity storage problem that limits the widespread use of renewable energy. The MTA Will Disinfect Subways With UV Lights Proven To Kill COVID-19 - Secretnyc.

How "zombie" solar cells could power indoor devices without sunlight. Negative electricity prices: lockdown's demand slump exposes inflexibility of German power. Sunny places could see average solar prices of $0.01 or $0.02 per kilowatt-hour within 15 years. New research models that the price of solar will continue to drop faster than previous predictions. This would mean that building new solar would be routinely cheaper than operating already-built fossil fuel plants, even in today’s world of ultra-cheap natural gas. Solar canopies can put PV panels in some new and interesting places. The pandemic is accelerating coal's demise. City of Houston Surprises: 100% Renewable Electricity — $65 Million in Savings in 7 Years.

Clean Power. Infrared Cameras Could Be the New CCTV - OneZero. Australia's great solar buy-back: Business offered 6-month break from power bills. A second Australian solar buy-back scheme has been announced in the space of one week, the latest being a partnership between Smart Commercial Solar teaming up with not-for-profit Clear Sky Solar Investments. The offering from Smart and Clear Sky aims to give companies struggling through the Covid-19 crisis an opportunity use their existing rooftop solar system to unlock cash flow, get a short breather from paying bills, and then continued access to discounted power.

New Finnish innovation to fight the pandemic – Hands-free handle made of recycled plastic. The Future of Solar Powered Modular Grow Units…is Now! Brussels Expo to install disinfecting UV lamps in bid to relaunch activities. The world is on lockdown. So where are all the carbon emissions coming from?