Suez canal drama – and a tiny bulldozer – inspire wave of memes. Sacha Baron Cohen ripping Facebook, internet giants apart is a must-watch - Business Insider. In 24 minutes, comedian Sacha Baron Cohen completely tore apart Facebook's defense for not policing disinformation that exists on its website.Cohen also made the case to regulate the world's multi-billion-dollar tech companies like Google and YouTube, as well as the people who run them, who he called the "Silicon Six. 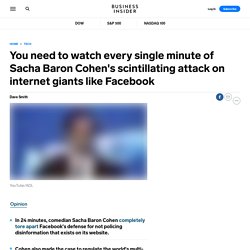 "The entire speech is a must-watch, considering how many billions of people use products made by Facebook and Google every single day.Visit Business Insider's homepage for more stories. I don't want to waste your time with me talking. Just please watch this video below, for your own sake. For context: Sacha Baron Cohen, the comedian known for playing fake news reporters like "Ali G" and "Borat" for movies and TV shows, was chosen to give the keynote address at the Anti-Defamation League's 2019 Never is Now Summit in New York City. 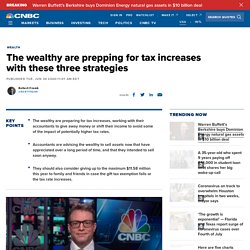 With rising deficits at the state and federal levels, as government spending soars and revenue drops from the Covid-19 crisis, taxes are likely to go up in coming years, especially for the highest earners. Presumptive Democratic nominee Joe Biden told wealthy donors at a fundraiser Monday that he planned to forge ahead with his campaign plan to hike taxes on the wealthy. “I’m going to get rid of the bulk of Trump’s $2 trillion tax cut,” Biden said, “and a lot of you may not like that, but I’m going to close loopholes like capital gains and stepped up basis.” Accountants and tax lawyers say they’re seeing a surge in calls and emails from wealthy clients asking about actions they can take now to avoid tax hikes in 2021 and beyond. The main action the wealthy are taking now is giving money to family and friends. Where to Stream 11 Essential Ken Burns Documentaries - NYT Watching. Watching is The New York Times’s TV and film recommendation newsletter and website. 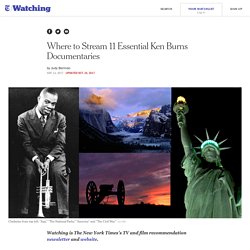 Ken Burns is going to war again. 'I've paid a huge personal cost:' Google walkout organizer resigns over alleged retaliation. A prominent internal organizer against Google’s handling of sexual harassment cases has resigned from the company, alleging she was the target of a campaign of retaliation designed to intimidate and dissuade other employees from speaking out about workplace issues. 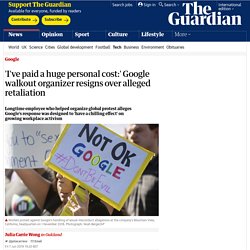 Claire Stapleton, a longtime marketing manager at Google and its subsidiary YouTube, said she decided to leave the company after 12 years when it became clear that her trajectory at the company was “effectively over”. The Ethics of Legacy Admissions - The Prindle Post. In a statement to the Senate Judiciary Committee, Judge Brett Kavanaugh responded to questions about his college-aged behavior by saying “I got into Yale Law School. 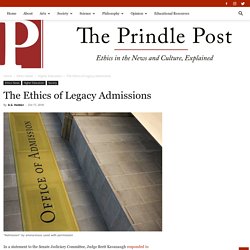 That’s the number one law school in the country. I had no connections there. I got there by busting my tail in college.” Although Kavanaugh’s claim to independence was quickly confirmed to be false (his grandfather also attended Yale), his concern to separate himself from the notion of being a “legacy admission” is unsurprising: the very concept grates against the oft-espoused cultural virtue of pulling yourself up by your own bootstraps.

Dying Alone: Kodokushi, Japan's epidemic of isolation through the eyes of a 'lonely death' cleaner. Should This Exist? Why Silicon Valley titans are obsessed with immortality. People have been trying to live forever for … basically forever.

Her son died. And then anti-vaxers attacked her. Grieving and frightened, just days after her son's death she checked her Facebook page hoping to read messages of comfort from family and friends. 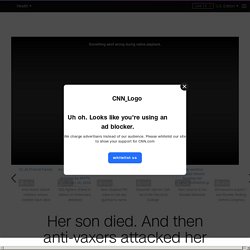 Instead, she found dozens of hateful comments: You're a terrible mother. You killed your child. You deserved what happened to your son. This is all fake - your child doesn't exist. Bewildered and rattled, she closed her Facebook app. More than 26 million people have taken an at-home ancestry test click 2x. As many people purchased consumer DNA tests in 2018 as in all previous years combined, MIT Technology Review has found. 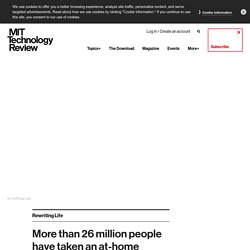 Surging public interest in ancestry and health—propelled by heavy TV and online marketing—was behind a record year for sales of the tests, which entice consumers to spit in a tube or swab their cheeks and ship the sample back to have their genomes analyzed. By the start of 2019, more than 26 million consumers had added their DNA to four leading commercial ancestry and health databases, according to our estimates. If the pace continues, the gene troves could hold data on the genetic makeup of more than 100 million people within 24 months. The Top 25 Songs That Matter Right Now.

Disney heiress criticizes CEO pay. Says the rich should pay more taxes. He was awarded $65.6 million for his performance last fiscal year, the result of a pay bump for extending his tenure at Disney through 2021 and stock awards in excess of $35 million. 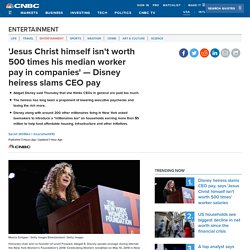 This year, however, the company eliminated a $500,000 boost to his base salary, keeping it at $3 million. It also cut his potential cash bonus from $20 million to $12 million and reduced his long-term incentive pay from $25 million to $20 million, the company said in a securities filing Monday. The heiress, 59, has long been a proponent of lowering executive paychecks and taxing the rich more. "The problem is that there's a systematic favoring of people who have accumulated an enormous amount of wealth," she said. Disney signed on to a letter with about 200 other millionaires living in New York last month, asking lawmakers to introduce a "millionaires tax" on households earning more than $5 million to help fund affordable housing, infrastructure and other initiatives.

Are You Lost in the World Like Me? click 2x works. Eu.usatoday. How many Americans collectively hold almost 1.5 trillion dollars worth of student debt? 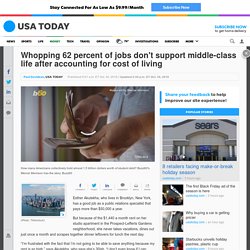 America Hits Rock Bottom - by Matt Lubchansky. Humpback Whales Are Falling Silent and the Reason Will Make You Cry. Male humpback whales are known for their evocative songs, but their classic melodies are being shortened or silenced in reaction to shipping noise, Japanese researchers found. Baleen whales such as humpbacks use songs to communicate, search for food, find mates and navigate the seas,but in Japan, their voices are being drowned out by the din of cacophonous human activity. The new study, published Wednesday in the journal PLOS ONE, adds more evidence that human-generated noise pollution interferes with marine life. Gallup data says our emotions hit a decade-low in 2017. Here's what psychologists say we should do about it. Get the Better newsletter. Oct. 27, 2018 / 9:49 AM GMT By Sarah DiGiulio Did you experience worry during a lot of the day yesterday? Dear Christine Blasey Ford: you are a welcome earthquake.

Dear Dr Christine Blasey Ford I am writing to thank you. No matter how harrowing your experience, no matter what the US Senate does in the weeks to come, you have achieved something profound in its power and impact, something that benefits all of us. For there are two arenas in which your words will reverberate – the Senate, and the immeasurably vast realm of public discourse and societal values. How the rich get richer – money in the world economy. Ditch the almond milk: why everything you know about sustainable eating is probably wrong.

In food and drink, we all want to do the right thing. We want to shop and eat sustainably. 'Mini-storytellers': Japanese children pass on horror of Nagasaki bombings. The Last Days Of An American Dairy Farm: “Hard To Believe It’s Over" Amazon’s facial recognition matched 28 members of Congress to criminal mugshots. The American Civil Liberties Union tested Amazon’s facial recognition system — and the results were not good. To test the system’s accuracy, the ACLU scanned the faces of all 535 members of congress against 25,000 public mugshots, using Amazon’s open Rekognition API. Here’s where it’s cheaper to take an Uber than to own a car.

Trump can dodge London’s protests – but Scotland is ready for him. Donald Trump thinks he can avoid London’s protests, but Scotland will be ready for him. What the Nazis driving people from homes taught philosopher Hannah Arendt about the rights of refugees. Facing a political revolt over immigration policies from the Christian Social Union partner in her coalition government, German Chancellor Angela Merkel agreed to a compromise, which would create “transit zones” or refugee camps along Germany’s southern border.

Under the agreement, migrants would be housed in designated transit areas, until German authorities determined their eligibility. The people at my local Toys R Us did this : funny. What the World Needs Now is for Everyone to Be $%&@#$!! Nicer. I am not the nicest person. Chart: Are We Living Under Fascism? - by Scott Bateman. A kindergarten nursery rhyme teaches kids to hide during school shooting. Police Surveillance Is Getting a Helping Hand from...Amazon! The Next Sexual Revolution Is Going to be All About Technology. The US is stingier with child care and maternity leave than the rest of the world.

In most American families led by couples, both parents are in the workforce. A broken idea of sex is flourishing. Blame capitalism. The rise of Donald Glover: how he captured America. Predictive Policing Is Not Like 'Minority Report' — It's Worse click 2x. CSU: Parent calls police on young Native American men on campus tour. Beyoncé, at Coachella, celebrated historically black colleges. Abusive relationships: Why it's so hard for women to 'just leave' Dollar Street. The article removed from Forbes, “Why White Evangelicalism Is So Cruel” – Political Orphans. Stephen Hawking argued that humans evolve through books and not just biology. Inequality rising worldwide.

Depression treatment: 30 years after Prozac arrived, we still buy the lie that chemical imbalances cause depression. Astronauts thoughts on aliens click 2x. "fake news" not new 2 clicks. The time when America stopped being great. Why we need the census click 2x. Oligarchs hide billions in shell companies. Here's how we stop them. Sinclair's script for stations. Employers no right to take workers tips click 2x. Two minutes to midnight: did the US miss its chance to stop North Korea’s nuclear programme? Why Haven’t You Deleted Your Facebook Yet? - by Scott Bateman. 1sr US census had 4 questions click 2x. Refugees learn masonry click 2x. Sex, Obsession, and J-Pop: ‘Tokyo Idols’ Examines the Commodification of Young Girls.

The Kids Are Alright - by Pia Guerra. Evaluating Sources in a ‘Post-Truth’ World: Ideas for Teaching and Learning About Fake News.

Related:  Disinformation   -  Which is witch?   -  kolla upp   -  Critical Thinking   -  Digital tools and literacy   -  FAKE NEWS   -  Scienze sociali   -  Other Side of the Sky   -  Critical Reading   -  Fake News   -  ec world   -  källkritik   -  Systemic   -  Source critisim   -  Media Literacy   -  US.A.ID   -  Alternate Truth   -  Thoughts   -  Are You Lost in the World Like Me? click 2x works   -  How the rich get richer – money in the world economy   -  Chart: Are We Living Under Fascism? - by Scott Bateman   -  The US is stingier with child care and maternity leave than the rest of the world   -  A broken idea of sex is flourishing. Blame capitalism   -  Dollar Street   -  The article removed from Forbes, “Why White Evangelicalism Is So Cruel” – Political Orphans   -  Inequality rising worldwide   -  Depression treatment: 30 years after Prozac arrived, we still buy the lie that chemical imbalances cause depression   -  Oligarchs hide billions in shell companies. Here's how we stop them   -  Two minutes to midnight: did the US miss its chance to stop North Korea’s nuclear programme?   -  1sr US census had 4 questions click 2x   -  Refugees learn masonry click 2x   -  Heritage fruit varieties rescued click2x   -  The Cambridge Analytica scandal is confusing. This timeline will help   -  World’s great forests could lose half of all wildlife as planet warms – report   -  How biased is your news source? You probably won’t agree with this chart   -  Evaluating Sources in a ‘Post-Truth’ World: Ideas for Teaching and Learning About Fake News   -  Education   -  Enterprise