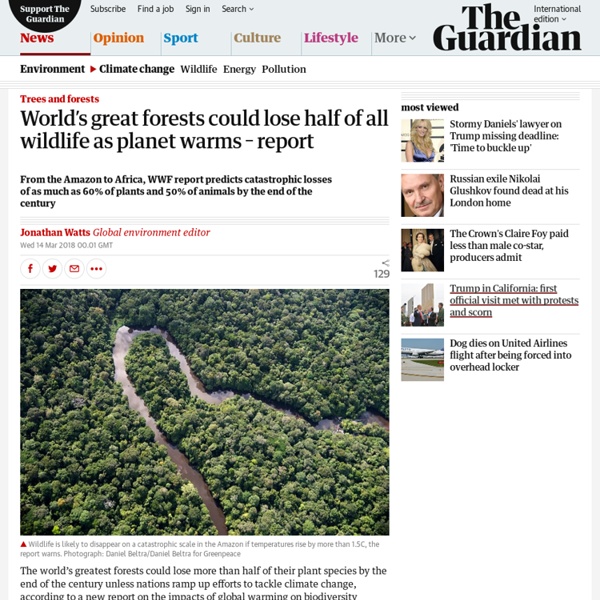 The world’s greatest forests could lose more than half of their plant species by the end of the century unless nations ramp up efforts to tackle climate change, according to a new report on the impacts of global warming on biodiversity hotspots. Mammals, amphibians, reptiles and birds are also likely to disappear on a catastrophic scale in the Amazon and other naturally rich ecosysterms in Africa, Asia, North America and Australia if temperatures rise by more than 1.5C, concludes the study by WWF, the University of East Anglia and the James Cook University. The research in the journal Climate Change examined the impact of three different levels of warming – 2C (the upper target in the 2015 Paris agreement), 3.2C (the likely rise given existing national commitments) and 4.5C (the forecast outcome if emissions trends remain unchanged) on nearly 80,000 plant and animal species in 35 of the world’s most biodiverse regions. A partial solution may be relocation.

Climate change will displace millions Wildfires tearing across Southern California have forced thousands of residents to evacuate from their homes. Even more people fled ahead of the hurricanes that slammed into Texas and Florida earlier this year, jamming highways and filling hotels. A viral social media post showed a flight-radar picture of people trying to escape Florida and posed a provocative question: What if the adjoining states were countries and didn’t grant escaping migrants refuge? The book that fights sexism with science When young men and women come up against sexist stereotypes masquerading as science, Angela Saini wants them to be armed with the facts. “I call my book ammunition,” she says of her 288-page prize-winning work Inferior: The True Power of Women and the Science that Shows It. “There are people out there who insist that somehow the inequalities we see in society are not just because of historic discrimination, but also because of biology – the idea that there are factors within us that will cause men or women to be better at some things than others.” She wrote Inferior to demonstrate that “actually, science doesn’t support that point of view. I think it’s important we understand these scientific facts.

The tragic story of America's only native parrot, now extinct for 100 years It was winter in upstate New York in 1780 in a rural town called Schoharie, home to the deeply religious Palatine Germans. Suddenly, a flock of gregarious red and green birds flew into town, seemingly upon a whirlwind. The townspeople thought the end of the world was upon them. Though the robin-sized birds left quickly, their appearance was forever imprinted on local lore. As author Benjamin Smith Barton wrote, “The more ignorant Dutch settlers were exceedingly alarmed.

Ghana's Illegal Galamsey Gold Mining Affecting Cocoa Farmers, Chocolate Supply Obuasi, GhanaKwaku Asare grabbed his machete and trekked through the bush to his cocoa farm—through winding pathways and hills, past ominous pits of muddy water, and underneath the low-hanging canopy of dried cocoa leaves. But the trees were bare. A few rotting cocoa pods littered the ground, while other stunted pods refused to ripen on the branches. “When the Chinese came, they told me that my plants were not yielding anymore because there was so much gold under the soil,” Asare said. After a few years of low production, he sold his 14 acres to a group of small-scale gold miners, also called galamsey miners, with a Chinese sponsor. The money is gone now and Asare’s land is poisoned.

Nearly 200 Horses Found Dead Amid Southwest Drought In Arizona CAMERON, Arizona - Off a northern Arizona highway surrounded by pastel-colored desert is one of the starkest examples of drought's grip on the American Southwest: Nearly 200 dead horses surrounded by cracked earth, swirling dust, and a ribbon of water that couldn't quench their thirst. Flesh exposed and in various stages of decomposition, the carcasses form a circle around a dry watering hole sunken in the landscape, CBS affiliate KPHO reports. It's clear this isn't the first time the animals have struggled.

Refusing to act on climate change will cost future generations $530 trillion (at least) - Techly By continuing to delay significant reductions in greenhouse gas emissions, we risk handing young people alive today a bill of up to US$535 trillion. This would be the cost of the “negative emissions” technologies required to remove CO₂ from the air in order to avoid dangerous climate change. These are the main findings of new research published in Earth System Dynamics, conducted by an international team led by US climate scientist James Hansen, previously the director of NASA’s Goddard Institute for Space Studies. The Paris Agreement in 2015 saw the international community agree to limit warming to within 2°C.

Teachers' Strategies for Pronouncing and Remembering Students' Names Correctly The names of white and nonwhite children alike are mispronounced, Kohli and Solórzano write, but the experience is much more damaging for a child who “goes to school and reads textbooks that do not reference her culture, sees no teachers or administrators that look like her, and perhaps does not hear her home language,” since these cues (plus advertisements, movies and other indicators of societal values at large) already communicate “that who they are and where they come from is not important.” For one Latina study participant, having her name mispronounced made her wish her parents were more Americanized; a Sri Lankan American reported feeling that his name was “an imposition on others.” They’re not imagining things.

Humpback whales stop their song when human vessels make noise Scientists have found yet another way we’re disrupting wildlife: when cargo ships start producing a lot of noise, humpback whales reduce or even stop their singing. Image credits: Christopher Michel. Not only do whales (and other marine mammals) use sounds to communicate, but they’re much more dependent on sounds than land creatures because their other senses are so limited in water.

The World’s Water Crisis Explained on World Water Day “Day Zero,” when at least a million homes in the city of Cape Town, South Africa, will no longer have any running water, was originally scheduled for April. It was recently moved to July. The three-year long drought hasn’t ended, but severe water rationing—limiting people to a mere 13 gallons (50 litres) per person per day—has made a difference. (To put this into perspective, an average U.S. citizen uses 100 gallons (375 liters) per day.)

Human race just 0.01% of all life but has destroyed over 80% of wild mammals – study Humankind is revealed as simultaneously insignificant and utterly dominant in the grand scheme of life on Earth by a groundbreaking new assessment of all life on the planet. The world’s 7.6 billion people represent just 0.01% of all living things, according to the study. Yet since the dawn of civilisation, humanity has caused the loss of 83% of all wild mammals and half of plants, while livestock kept by humans abounds. The new work is the first comprehensive estimate of the weight of every class of living creature and overturns some long-held assumptions. Plummeting insect numbers 'threaten collapse of nature' The world’s insects are hurtling down the path to extinction, threatening a “catastrophic collapse of nature’s ecosystems”, according to the first global scientific review. More than 40% of insect species are declining and a third are endangered, the analysis found. The rate of extinction is eight times faster than that of mammals, birds and reptiles. The total mass of insects is falling by a precipitous 2.5% a year, according to the best data available, suggesting they could vanish within a century. The planet is at the start of a sixth mass extinction in its history, with huge losses already reported in larger animals that are easier to study. But insects are by far the most varied and abundant animals, outweighing humanity by 17 times.

Taking Notes By Hand May Be Better Than Digitally, Researchers Say Laptops are common in lecture halls worldwide. Students hear a lecture at the Johann Wolfang Goethe-University on Oct. 13, 2014, in Frankfurt am Main, Germany. Thomas Lohnes/Getty Images hide caption toggle caption Thomas Lohnes/Getty Images The Children’s Book That Caused Japan’s Raccoon Problem Today, raccoons are a nuisance animal in Japan, rummaging through trash, stealing goods from vendors, feasting on crops and even damaging ancient Japanese temples with their sharp claws and abundant poop. But their invasion started back in 1977, when the kids of Japan were going crazy for a cartoon raccoon named Rascal. He was cute and mischievous and the star of an anime series adaptation of a favorite children’s book, written by American author Sterling North. As Eric Grundhauser over at Atlas Obscura explains, the book, entitled Rascal: A Memoir of a Better Era, was released to western audiences in 1963 and told the story of North’s adventures with his childhood pet raccoon.

A Black Family Stood Up to this Racist White Couple a Restaurant A black teenager used Facebook Live to reveal just how ugly racism is at a Chester's in San Antonio, Texas. The 15-year-old went with her family to the restaurant after attending church services, and according to her, when she got her beverage she heard a white family cursing at her for an unknown reason. With her camera in hand, and another relative by her side, she walked up to the white family and said, "So, Facebook, this is what racist people looks like." Without skipping a beat, the white family immediately started using racial slurs and obscenities at the teen and her family. The white woman in the film began shouting, "You're a fucking nigger!"