Balanced news via media bias ratings for an unbiased news perspective. Are claims Swedish 'köttbullar' come from Turkey total balls? Fake news is altering perceptions of facts, Swedish survey shows. How false news can spread - Noah Tavlin. The term “circular reporting” likely originated in the government and military intelligence community, where ascertaining the validity of information is absolutely critical when there is misinformation intentionally being spread and leaked by one’s opposition. 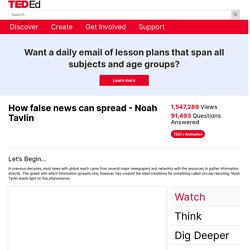 This paper goes into greater detail about how the military intelligence community deals with circular reporting. Sometimes, false information can spread so widely that it becomes accepted as true. For example, the Coati, a relative of the raccoon, native to Brazil, has become alternatively known as “the Brazilian Aardvark.” This blog post details ten of the biggest Wikipedia hoaxes to date. While Wikipedia has high-risk potential to be a source of misinformation—and has been such in the past—its community of editors has become more and more vigilant about catching un-cited or biased edits to pages before they are widely read. This Video Will Make You Angry. How social media can make history - Clay Shirky. Fake News vs. Real News: Determining the Reliability of Sources. Video and a related lesson plan from TEDEd. Update: Please also see our new, 2017 lesson, Evaluating Sources in a ‘Post-Truth’ World: Ideas for Teaching and Learning About Fake News _________ How do you know if something you read is true?

Why should you care? We pose these questions this week in honor of News Engagement Day on Oct. 6, and try to answer them with resources from The Times as well as from Edutopia, the Center for News Literacy, TEDEd and the NewseumEd. Although we doubt we need to convince teachers that this skill is important, we like the way Peter Adams from the News Literacy Project frames it in a post for Edutopia. As he points out, every teacher is familiar with “digital natives” and the way they seem to have been born with the ability to use technology. Below, a roundup of tools, questions, activities and case studies we hope can help reduce this digital naïveté. Getting Started: What is News Literacy and Why Do You Need It? Video and a related lesson plan from TEDEd. 2. SHEG Evaluating Information Online. Evaluating Sources in a ‘Post-Truth’ World: Ideas for Teaching and Learning About Fake News.

Back in 2015, when we published our lesson plan Fake News vs. Real News: Determining the Reliability of Sources, we had no way of knowing that, a year later, the Oxford Dictionaries would declare “post-truth” the 2016 word of the year; that fake news would play a role in the 2016 presidential election; that it would cause real violence; and that the president-elect of the United States would use the term to condemn mainstream media outlets he opposes. Back then, to convince teachers that the skill was important, we quoted Peter Adams of the News Literacy Project on the “digital naïveté” of the “digital natives” we teach.

Now, however, we doubt that we need to convince anyone. These days, invented stories created in a “fake news factory”— or by a 23-year-old in need of cash — go viral, while articles from traditional sources like The Times are called “fake news” by those who see them as hostile to their agenda. As always, we welcome your ideas; please post them in the comments. Mr. Is Mr. Fake News Archives. SourcesCriticism 2015 TheDanishNationalArchives. ICT in school, part 8: Source criticism. The more we use Internet in education, the more important source criticism becomes. 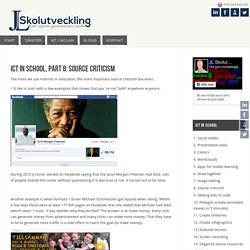 I´d like to start with a few examples that shows that you´re not ”safe” anywhere anymore. During 2012 a rumor started on Facebook saying that the actor Morgan Freeman had died. Lots of people shared the rumor without questioning if it was true or not. It turned out to be false. Another example is when formula 1 driver Michael Schumacher got injured when skiing. Drogfritt.nu is a swedish page that says it´s an independent nonprofit organisation with no religious connections. Earlier you could just have a lesson or two to learn kids how to use critisism onto different sources, but nowadays you must use it every lesson you´re using internet. Some resources you can use: Photoshop in commersials A page that tests your ability to distinguish real and fake pages (a phishing test). Skolverket A checklist for questions to ask when evaluating a page on internet. Source Critical Checklist.