The Cambridge Analytica scandal is confusing. This timeline will help 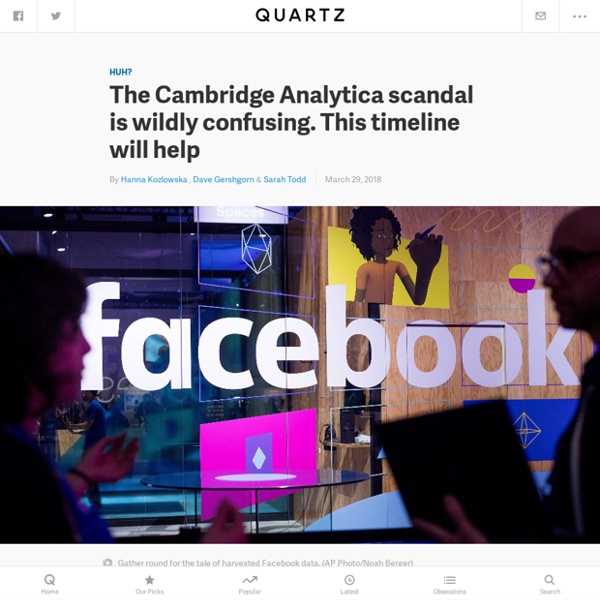 If you need evidence of the US retail sector’s precarious condition, consider that more than 9,000 stores closed last year, and another 12,000 are on the chopping block this year, according to commercial property firm Cushman & Wakefield. Despite a 4.2% rise in 2017 over the previous year, US retail growth is lumpy and clearly not firing on all cylinders. Every week brings gloomy news of bankruptcies or downsizings. Online sales, meanwhile, have been climbing, underpinning the sector’s overall growth. US retail is at a crossroads, with brands and retailers still trying to decide whether e-commerce is friend or foe. On one hand, e-commerce is killing traditional brick-and-mortar business, but on the other, you’ll have a hard time finding a company whose future growth strategy doesn’t rest on developing its online channels. The future of retail is happening now, in China Turning supermarket hell into Hema Taking the pain out of car shopping Mom-and-pop convenience stores get more convenient

Related:  Websites useful or fun • Fake vs Fact • Trump and other Bad Apples

The BBC is letting you download more than 16,000 free sound effect samples from its archive There can be few organisations that have used more sound effects than the BBC, so there’s bound to be great interest in the news that the corporation has now made more than 16,000 of its FX available for free download. These are being released under the RemArc licence, which means that they can be used for “personal, educational or research purposes”. The archive is easily searchable, and a quick browse confirms that there’s a wide variety of content, ranging from the atmospheric to the downright obscure. Each sample can be previewed and both its duration and filename are listed. The service is currently in beta, but you can dive in and start downloading right now on the BBC Sound Effects website. Don’t forget that MusicRadar also offers its own library of free samples in the form of SampleRadar, and that this content can be in commercial recordings royalty-free.

Fact-checking an immigration meme that's been circulating for more than a decade A viral image on social media -- one that’s critical of illegal immigration -- has been circulating for years. The list of claims first circulated in the form of a chain email in 2006, according to Snopes.com. Six years later, we checked several of the claims ourselves. With immigration in the headlines today, these claims are popular again. So we’ll take a fresh look at them here. Reading Across a Dozen Literacies This article will define each literacy while giving examples of "reading" within each category. It takes special skills to read a swamp or a beach or a desert area. These skills also differ from region to region as the flora and fauna shift. Most of us have heard of swimmers caught in rip tides because they did not know how to read the signs or of visitors enjoying tidal flats suddenly swept up in an incoming tide much larger than anything they knew back home. Artistic Literacy

Sorting the Real Sandy Photos From the Fakes With Hurricane Sandy approaching the New York metro area, the nation's eyes are turning to its largest city. Photos of storms and flooding are popping up all over Twitter, and while many are real, some of them -- especially the really eye-popping ones -- are fake. This post, which will be updated over the next couple of days, is an effort to sort the real from the unreal. It's a photograph verification service, you might say, or a pictorial investigation bureau. If you see a picture that looks fishy, send it to me at alexis.madrigal[at]gmail.com. TIMELINE: Chinese Books, Manuscripts, Maps, and Prints The Xiping Stone Classics These engravings of the seven Confucian classics were set up outside the National University Gate, located on the south side of Loyang, the capital city, in the Eastern Han dynasty. They were created between 175 and 183, after Cai Yong and a group of scholars successfully petitioned the emperor to have the Confucian classics carved in stone in order to prevent their being altered to support particular points of view. They are also called the “Han Stone Classics” and the “Single-Script Stone Classics."

Truth, truthiness, triangulation: A news literacy toolkit for a “post-truth” world We were guaranteed a free press, We were not guaranteed a neutral or a true press. We can celebrate the journalistic freedom to publish without interference from the state. We can also celebrate our freedom to share multiple stories through multiple lenses. But it has always been up to the reader or viewer to make the reliability and credibility decisions. It is up to the reader or viewer to negotiate truth. How to Watch 2018 Winter Olympics Online Without Cable – FOMOPOP You can stream the 2018 Winter Olympics with a live TV streaming service. No cable or satellite TV subscription needed. The 2018 Winter Olympics will air on NBC, NBCSN, CNBC, USA, and The Olympic Channel. You can see live schedules for all events.

The Heroes of America's Startup Economy Weren't Born in America According to the Entrepreneurship Rate indicator of the Inc. Entrepreneurship Index, Inc.'s proprietary benchmarked score representing the health of American startups, the percentage of entrepreneurs who are immigrants is currently close to a 20-year high. Today, they are a large reason the Inc.