How biased is your news source? You probably won’t agree with this chart 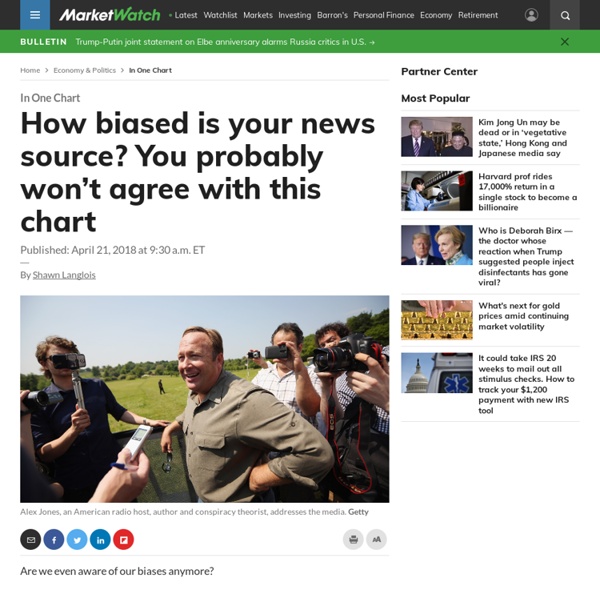 Are we even aware of our biases anymore? If you look at this chart and are convinced your “extreme” source belongs in the middle, you just might be part of the problem plaguing America today. “In the past, national evening news programs, local evening news programs, and the front pages of print newspapers were dominated by fact-reporting stories,” says the chart’s creator, patent attorney Vanessa Otero. “Now, however, many sources people consider to be ‘news sources’ are actually dominated by analysis and opinion pieces.” She released the first version of the chart back in 2016, and she’s updated it several times since. Over the past year, it’s gone viral, with thousands of educators at both the high school and college levels using the compelling visual. Otero also talked about why such bias is so troubling. “I think the extremes are very toxic and damaging to the country,” she explained to MarketWatch. And with that, let the backlash over the latest version begin. But where? But where?

Teaching Adolescents How to Evaluate the Quality of Online Information An essential part of online research is the ability to critically evaluate information. This includes the ability to assess its level of accuracy, reliability, and bias. In 2012, my colleagues and I assessed 770 seventh graders in two states to study these areas, and the results definitely got our attention. Unfortunately, over 70 percent of the students’ responses suggested that: Middle school students are more concerned with content relevance than with credibility They rarely attend to source features such as author, venue, or publication type to evaluate reliability and author perspective When they do refer to source features in their explanations, their judgments are often vague, superficial, and lacking in reasoned justification

False News Travels Farther, Faster Than The Truth, MIT Study Finds They say bad news travels fast, but a new study suggests that false news does as well. And, at least on Twitter, it goes even farther than facts. "False news travels farther, faster, deeper and more broadly than the truth in every category of information and sometimes by an order of magnitude," said Sinan Aral, the paper’s senior author and head of MIT’s Initiative on the Digital Economy. People who use Twitter are novelty junkies, the study suggests, and they often forward surprising, disgusting or fear-inducing information without stopping to check if it's true. Previous research has found that someone who shares novel information gains social status, because they seem to have inside information, Aral says.

Fake news 2.0: personalized, optimized, and even harder to stop Fake news may have already influenced politics in the US, but it’s going to get a lot worse, warns an AI consultant to the CIA. Sean Gourley, founder and CEO of Primer, a company that uses software to mine data sources and automatically generate reports for the CIA and other clients, told a conference in San Francisco that the next generation of fake news would be far more sophisticated thanks to AI. “The automation of the generation of fake news is going to make it very effective,” Gourley told the audience at EmTech Digital, organized by MIT Technology Review. The warning should cause concern at Facebook. The social network has been embroiled in a scandal after failing to prevent fake news, some of it created by Russian operatives, from reaching millions of people in the months before the 2016 presidential election.

"fake news" not new 2 clicks Donald Trump may well be remembered as the president who cried “fake news.” It started after the inauguration, when he used it to discredit stories about the size of the crowd at his inauguration. He hasn’t let up since, labeling any criticism and negative coverage as “fake.” Just in time for awards season, he rolled out his “Fake News Awards” and, in true Trumpian fashion, it appears he is convinced that he invented the term. He didn’t. As a rhetorical strategy for eroding trust in the media, the term dates back to the end of the 19th century. The tricks propagandists use to beat science Back in the 1950s, health professionals became concerned that smoking was causing cancer. Then, in 1952, the popular magazine Reader’s Digest published “Cancer by the Carton,” an article about the increasing body of evidence that proved it. The article caused widespread shock and media coverage. Today the health dangers of smoking are clear and unambiguous. And yet smoking bans have been slow to come into force, most having appeared some 40 years or more after the Reader’s Digest article.

We're climate researchers and our work was turned into fake news Science is slow. It rests on painstaking research with accumulating evidence. This makes for an inherently uneasy relationship with the modern media age, especially once issues are politicised. Our brains rapidly and automatically process opinions we agree with as if they are facts By Christian Jarrett In a post-truth world of alternative facts, there is understandable interest in the psychology behind why people are generally so wedded to their opinions and why it is so difficult to change minds. We already know a lot about the deliberate mental processes that people engage in to protect their world view, from seeking out confirmatory evidence (the “confirmation bias“) to questioning the methods used to marshal contradictory evidence (the scientific impotence excuse). Now a team led by Anat Maril at the Hebrew University of Jerusalem report in Social Psychological and Personality Science that they have found evidence of rapid and involuntarily mental processes that kick-in whenever we encounter opinions we agree with, similar to the processes previously described for how we respond to basic facts.

Fact-checking an immigration meme that's been circulating for more than a decade A viral image on social media -- one that’s critical of illegal immigration -- has been circulating for years. The list of claims first circulated in the form of a chain email in 2006, according to Snopes.com. Six years later, we checked several of the claims ourselves. With immigration in the headlines today, these claims are popular again. So we’ll take a fresh look at them here.