Depression treatment: 30 years after Prozac arrived, we still buy the lie that chemical imbalances cause depression 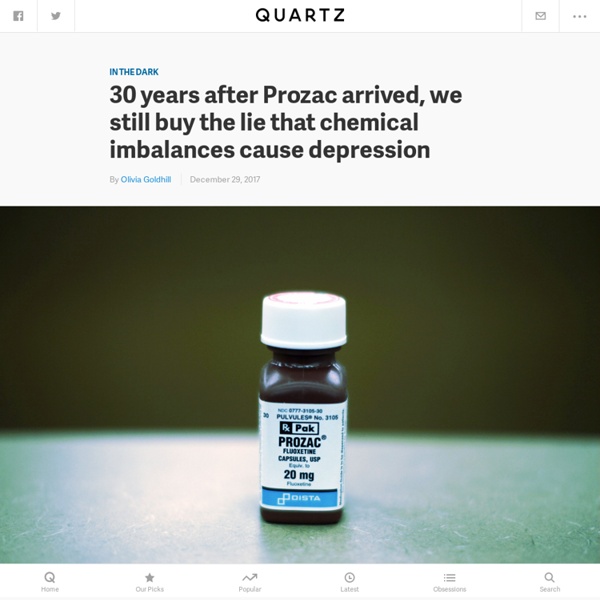 The first time Nick Mullins entered Deep Mine 26, a coal mine in southwestern Virginia, the irony hit him hard. Once, his ancestors had owned the coal-seamed cavern that he was now descending into, his trainee miner hard-hat secure. His people had settled the Clintwood and George’s Fork area, along the Appalachian edge of southern Virginia, in the early 17th century. Around the turn of the 1900s, smooth-talking land agents from back east swept through the area, coaxing mountain people into selling the rights to the ground beneath them for cheap. One of Mullins’ ancestors received 12 rifles and 13 hogs—one apiece for each of his children, plus a hog for himself—in exchange for the rights to land that has since produced billions of dollars worth of coal. “I probably ended up mining a lot of that coal,” says Mullins, a broad-shouldered, bearded 38-year-old with an easy smile. There were other ironies to savor too. “No one wanted to see you in the mines,” he says. Passing on the costs

Medicaid work requirements: Where do they stand after the blue wave? The 2018 midterm elections have dealt a significant setback to President Trump’s agenda in the legislative arena. However, there are still many ways for the Trump administration to keep swinging away at the Affordable Care Act. One particularly effective unilateral instrument is the regulatory process – that is, the implementation of statutory law by executive agencies. This may prove particularly consequential for Medicaid, the health coverage program for those with low incomes or disabilities. One particular area of attention for scholars like me is so-called community engagement or work requirements for Medicaid beneficiaries.

I’ve Been Reporting on MS-13 for a Year. Here Are the 5 There’s one thing everyone can agree with President Donald Trump on about the street gang MS-13: The group specializes in spectacular violence. Its members attack in groups, in the woods, at night, luring teens to their deaths with the promise of girls or weed. One Long Island boy told me he doesn’t go to parties anymore because he worries any invitation could be a trap. A victim’s father showed me a death certificate that said his son’s head had been bashed in, then lowered his voice and added that the boy’s bones had been marked by machete slashes, but he didn’t want the mother to know that. A teenager who has left the gang told me he considers himself dead already, and is just trying to make sure MS-13 doesn’t kill his family.

War on the wildest places: US bill may open pristine lands to development The Big Snowy Mountains wilderness study area in Montana represents 91,000 acres of the wildest land left in America. Viewed from a limestone bluff high in a timbered gulch, no houses are visible. No transmission lines or roads interrupting the expanse of green. Google Ngram Viewer The Google Ngram Viewer is an online phrase-usage graphing tool originally developed by Jon Orwant and Will Brockman of Google, inspired by a prototype (called "Bookworm") created by Jean-Baptiste Michel and Erez Aiden from Harvard and Yuan Shen from MIT. It charts the yearly count of selected n-grams (letter combinations)[n] or words and phrases,[1][2] as found in over 5.2 million books digitized by Google Inc (up to 2008).[3][4] The words or phrases (or ngrams) are matched by case-sensitive spelling, comparing exact uppercase letters,[2] and plotted on the graph if found in 40 or more books during each year (of the requested year-range).[5] The Ngram tool was released in mid-December 2010[1][3] and now supports searches for parts of speech and wildcards. The word-search database was created by Google Books and was based originally on 5.2 million books published between 1500 and 2008. Operation and restrictions[edit] Corpora[edit]

Eerie Photos of History's Deadliest Pandemic In 1918, it is estimated that about 500 million people — or about one third of the world’s population — caught influenza, otherwise known at the time as the “Spanish Flu." It was the deadliest disease outbreak in recorded history, with between 50 million and 100 million people worldwide being killed. In the United States alone, 675,000 died and the average life expectancy fell by about 12 years between 1917 to 1918.

Fact-checking an immigration meme that's been circulating for more than a decade A viral image on social media -- one that’s critical of illegal immigration -- has been circulating for years. The list of claims first circulated in the form of a chain email in 2006, according to Snopes.com. Six years later, we checked several of the claims ourselves. How Segregation Shapes Fatal Police Violence : Code Switch The family of Dontre Hamilton marked a spot in red paint to memorialize where he was shot by a Milwaukee police officer. Carrie Antlfinger/AP hide caption toggle caption htop Users often deploy htop in cases where Unix top does not provide enough information about the system's processes. htop is also popularly used interactively as a system monitor.[3] Compared to top, it provides a more convenient, visual, cursor-controlled interface for sending signals to processes. Because system monitoring interfaces are not standardized among Unix-like operating systems, much of htop's code must be rewritten for each operating system. Cross-platform support was added in htop 2.0.[5] References[edit] External links[edit] htop Homepage

Growing Up Surrounded by Books Has a Lasting Positive Effect on the Brain, Says a New Scientific Study Image by George Redgrave, via Flickr Commons Somewhere in the annals of the internet--if this sprawling, near-sentient thing we call the internet actually has annals--there is a fine, fine quote by filmmaker John Waters: We need to make books cool again. If you go home with somebody and they don’t have books, don’t fuck them.