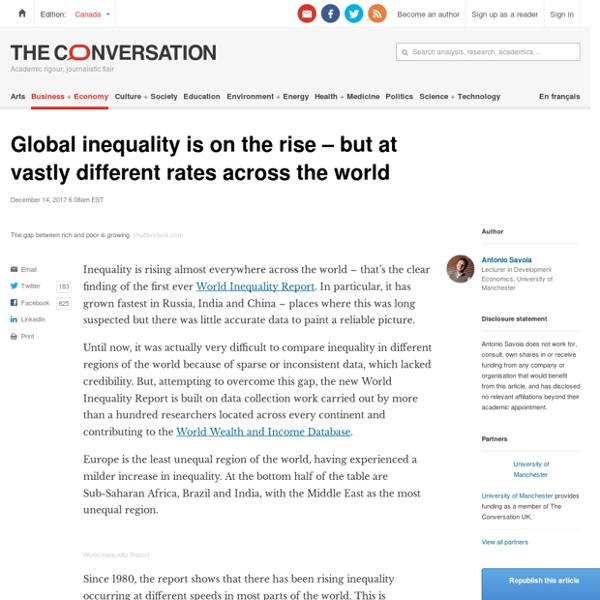 Inequality is rising almost everywhere across the world – that’s the clear finding of the first ever World Inequality Report. In particular, it has grown fastest in Russia, India and China – places where this was long suspected but there was little accurate data to paint a reliable picture. Until now, it was actually very difficult to compare inequality in different regions of the world because of sparse or inconsistent data, which lacked credibility. But, attempting to overcome this gap, the new World Inequality Report is built on data collection work carried out by more than a hundred researchers located across every continent and contributing to the World Wealth and Income Database. Europe is the least unequal region of the world, having experienced a milder increase in inequality. At the bottom half of the table are Sub-Saharan Africa, Brazil and India, with the Middle East as the most unequal region. Inequality is always a concern Inequality in the developing world

The 2018 Midterms and the Specter of Voter Suppression Read: The ‘hubris’ of the Supreme Court’s voting-rights ruling On Saturday, President Donald Trump ensured that the issue would be front and center as Election Day approached. “All levels of government and Law Enforcement are watching carefully for VOTER FRAUD, including during EARLY VOTING,” he tweeted. “Cheat at your own peril.

Buddhism: 11 Common Misunderstandings and Mistakes People believe many things about Buddhism that simply are incorrect. They think Buddhists want to get enlightened so they can be blissed out all the time. If something bad happens to you, it's because of something you did in a past life. Everybody knows that Buddhists have to be vegetarians. Unfortunately, much of what "everybody knows" about Buddhism isn't true.

TNCs in NEEs – Geography Cat finds out more – Geography Cat TNC stands for transnational corporation, this means a global company that operates in many different countries. An example of a TNC is Unilever; it has headquarters in the UK and the Netherlands, research and development facilities in both of those nations and in the USA, India and China, and production plants in another thirteen countries, including Brazil, Nigeria and Mexico. Unilever’s wide variety of products are available to buy in 190 countries. NEE stands for newly emerging economy, this term refers to countries that are newly or recently industrialised and whose economy is growing at a fast pace. Examples of NEEs include Brazil, Mexico, Nigeria, India and China.

Inequality in Scotland: despite Nordic aspirations, things are not improving When it comes to social policy, Scottish politicians have tended to look across the North Sea, rather than the Atlantic, for inspiration. The desire to follow the more progressive Nordic model on issues of social and economic inequality has become one of the defining features of Scottish politics in comparison with the rest of the UK. Since the introduction of the Scotland Act in 1998, more and more of the powers needed to achieve this “idyll” have been devolved from Westminster to Holyrood, enabling the Scottish parliament to take a different course to its southern neighbour.

More acidic oceans 'will affect all sea life' Image copyright JAGO-TEAM/GEOMAR All sea life will be affected because carbon dioxide emissions from modern society are making the oceans more acidic, a major new report will say. The eight-year study from more than 250 scientists finds that infant sea creatures will be especially harmed. The Man Who Documented Native American Cultures Edward Sheriff Curtis The Man Who Documented Native American Cultures by Chris Nelson Born on a Wisconsin farm in 1868, Edward Sheriff Curtis became fascinated with photography early on, building his own camera at the age 10. As a teenager his family relocated to Seattle, where he photographed Princess Angeline (aka Kickisomlo), the daughter of the Duwamish chief Seattle, after whom the city is named.

'Absolutely shocking': Niger Delta oil spills linked with infant deaths Babies in Nigeria are twice as likely to die in the first month of life if their mothers were living near an oil spill before falling pregnant, researchers have found. A new study, the first to link environmental pollution with newborn and child mortality rates in the Niger Delta, shows that oil spills occurring within 10km of a mother’s place of residence doubled neonatal mortality rates and impaired the health of her surviving children. Crucially, oil spills that occurred while the mother was still pregnant had no effect on child or neonatal mortality. But even spills that happened five years before conception doubled the neonatal mortality rate from 38 deaths to 76 deaths for every 1,000 births, the data found.

A child's chances of being taken into care depend on where they live in the UK A child growing up in the UK is much less likely to be doing so in care if they live in Northern Ireland rather than England, Scotland or Wales. That’s the finding of a new study from my colleagues and I working on the Child Welfare Inequalities Project, which highlights just how profoundly unequal children’s chances are of being in care or experiencing abuse or neglect. Our research set out to identify inequalities in children’s chances of being on a child protection plan or register – essentially a confirmed case of abuse or neglect – or of being in care, or what’s called a looked after child. Growing Up Surrounded by Books Has a Lasting Positive Effect on the Brain, Says a New Scientific Study Image by George Redgrave, via Flickr Commons Somewhere in the annals of the internet--if this sprawling, near-sentient thing we call the internet actually has annals--there is a fine, fine quote by filmmaker John Waters: We need to make books cool again. If you go home with somebody and they don’t have books, don’t fuck them. Don’t let them explore you until they’ve explored the secret universes of books. Don’t let them connect with you until they’ve walked between the lines on the pages.

Recent discoveries fundamentally change our picture of human evolution - Business Insider As anthropologists have discovered new species of human ancestors, our understanding of human history has changed. By sequencing the genomes from our Neanderthal and Denisovan cousins, scientists have also gained new insight into the genetic origins of our species. As researchers make more of these breakthroughs, the puzzle of who we are and where we came from gets more complicated.The earliest humans may have emerged much earlier, and in a different place in the world, than scientists previously thought.Visit Business Insider's homepage for more stories. In recent years, anthropologists around the world have discovered new human ancestors, figured out what happened to the Neanderthals, and pushed back the age of the earliest member of our species.

You draw the chart: How has life changed in 60 years? In October 1957, BBC Radio 4's Today programme went on the air for the first time. A lot has changed in the last 60 years: we are living much longer; attitudes to sex and marriage have become more relaxed; house prices have risen and the demographics of the UK have changed. But do you know by how much? Revealed: health prospects of children in care look worse than for anyone else When the state gets involved in the welfare of children or young people under 18, we call them “looked after”. They might live with foster parents, in a children’s home, with friends or relatives, or even with their own family under a compulsory home supervision order. Nearly 95,000 British youngsters live in such arrangements, which is not far off one in 100. We know that their life chances are not as good as they should be. In the words of the National Society for the Prevention of Cruelty to Children: “As a result of their experiences both before and during care, looked after children are at greater risk than their peers”. The media and authorities have tended to focus on how the education system fails this group.

How Native American tribes are bringing back the bison from brink of extinction On 5,000 hectares of unploughed prairie in north-eastern Montana, hundreds of wild bison roam once again. But this herd is not in a national park or a protected sanctuary – they are on tribal lands. Belonging to the Assiniboine and Sioux tribes of Fort Peck Reservation, the 340 bison is the largest conservation herd in the ongoing bison restoration efforts by North America’s Indigenous people. The bison – or as Native Americans call them, buffalo – are not just “sustenance,” according to Leroy Little Bear, a professor at the University of Lethbridge and a leader in the bison restoration efforts with the Blood Tribe. The continent’s largest land mammal plays a major role in the spiritual and cultural lives of numerous Native American tribes, an “integrated relationship,” he said.