No, Mexico isn't paying for border wall through USMCA trade deal, despite Donald Trump's claims. The Trump file: Trump's 10 top falsehoods of 2018. Trump wrong on size and timing of military pay increases. The 487 People, Places and Things Donald Trump Has Insulted on Twitter: A Complete List. 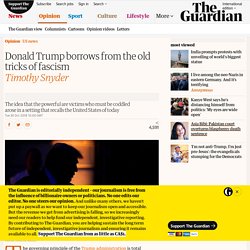 As we see in the president’s reactions to American rightwing terrorism, he will always claim victimhood for himself and shift blame to the actual victims. As we see in the motivations of the terrorists themselves, and in the long history of fascism, this maneuver can lead to murder. The Nazis claimed a monopoly on victimhood. Mein Kampf includes a lengthy pout about how Jews and other non-Germans made Hitler’s life as a young man in the Habsburg monarchy difficult. After stormtroopers attacked others in Germany in the early 1930s, they made a great fuss if one of their own was injured. The idea that the powerful must be coddled arose in a setting that recalls the United States of today. 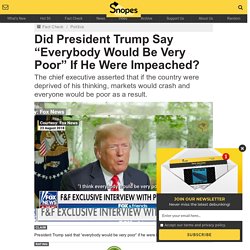 On 23 August 2018, amid news of the plea deal of Trump personal attorney Michael Cohen and the conviction of former Trump campaign manager Paul Manafort on eight counts of financial crimes, President Trump sat down with Fox and Friends’ Ainsley Earhardt for an interview. The topic of impeachment was broached by the President himself, who ruminated that “I don’t know how you can impeach somebody who’s done a great job.” His follow-up to that remark quickly became the topic of online memes: NPR Choice page. Did President Donald Trump Donate His Entire $400,000 Salary to Rebuild Military Cemeteries? In the summer of 2018, President Donald Trump donated his entire $400,000 annual salary to the Department of the Interior for the purpose of rebuilding military cemeteries. 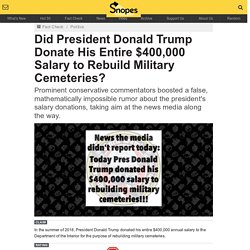 During his 2016 presidential campaign, Republican candidate Donald Trump, a billionaire real estate developer, vowed that if elected he would forgo the $400,000 annual presidential salary. So far as president Trump has stuck to that promise, handing over checks every three months for various projects overseen by different government departments. In the first quarter of 2017, for example, President Trump donated $78,333 (his $100,000 salary for that quarter, after taxes) to the Department of the Interior, specifically for the National Park Service’s maintenance of an historic Civil War site. His contribution was put towards two projects at Antietam National Battlefield in Maryland. 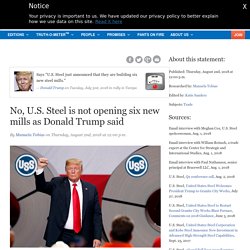 "U.S. Steel just announced that they are building six new steel mills," Trump said July 31 in Tampa. "And that number is soon going to be lifted, but I'm not allowed to say that, so I won't. " Trump repeated the company would open six major facilities at a roundtable in Minnesota on June 20 and again at a lunch with members of Congress on June 26. That was one mill down from when he said the company was going to open seven on July 27. Donald Trump says collusion is not a crime. That's not right.

President Donald Trump has consistently denied that any collusion took place between his campaign and Russia. 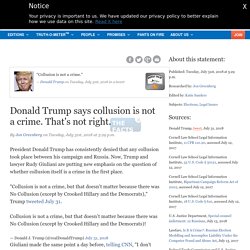 President Donald Trump campaigned hard on a promise to kick the economy into high gear and with the latest economic numbers, he had something to crow about. 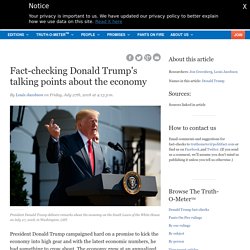 The economy grew at an annualized rate of 4.1 percent between April and June. Brain study shows how small lies grow into whoppers. STAT - A study of what goes on in the brain when someone tells a lie could offer a biological explanation for why untruths often “snowball over time,” according to psychologist Tali Sharot of University College London. 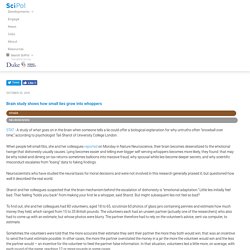 When people tell small fibs, she and her colleagues reported on Monday in Nature Neuroscience, their brain becomes desensitized to the emotional twinge that dishonesty usually causes. Lying becomes easier and telling ever-bigger self-serving whoppers becomes more likely, they found: that may be why nickel-and-diming on tax returns sometimes balloons into massive fraud, why spousal white lies become deeper secrets, and why scientific misconduct escalates from “losing” data to faking findings. Why Trump Supporters Don’t Mind His Lies click 2x. 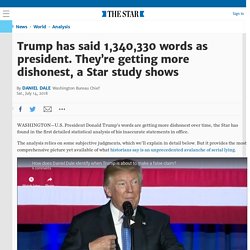 President Donald Trump’s words are getting more dishonest over time, the Star has found in the first detailed statistical analysis of his inaccurate statements in office. The analysis relies on some subjective judgments, which we’ll explain in detail below. But it provides the most comprehensive picture yet available of what historians say is an unprecedented avalanche of serial lying. Trump’s dishonesty has been a central story of his presidency, a daily problem that has confounded members of Congress and foreign leaders, confused policy debates and made it difficult for many members of the American public to trust the commander-in-chief. We’ve tried to quantify the issue. Readers wanted more than just this raw number. Donald Trump’s 25 Worst Lies From His First 200 Days. February 3: “Professional anarchists, thugs and paid protesters are proving the point of the millions of people who voted to MAKE AMERICA GREAT AGAIN!”

I, and the millions of others who have taken to the streets, are still waiting for our checks. Trump’s Transition of Untruths, Exaggerations and Flat-out Falsehoods. In 71 days as president elect of the United States, Donald Trump told at least 82 untruths. 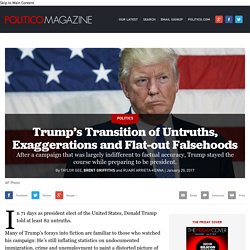 Trump’s Lies vs. Your Brain click 2x. All presidents lie. 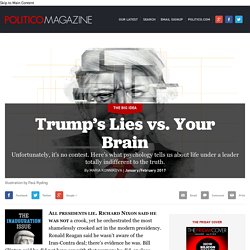 Richard Nixon said he was not a crook, yet he orchestrated the most shamelessly crooked act in the modern presidency. Ronald Reagan said he wasn’t aware of the Iran-Contra deal; there’s evidence he was. Bill Clinton said he did not have sex with that woman; he did, or close enough. On the art of the deal - 30 of Donald Trump's wildest quotes - Pictures. I wrote The Art of the Deal with Trump. He's still a scared child. “I alone can do it.” These five extraordinary words kept coming back to me as I reflected on Donald Trump’s first year as president of the US. He made this claim during his speech accepting the Republican nomination in July 2016.

At the time, it struck me simply as a delusional expression of his grandiosity. Looking back, I also hear the plaintive wail of a desperate child who believes he is alone in the world with no one to care for him. Trump Openly Brags About Lying to Justin Trudeau’s Face click 2x. Trump lies and what to call them, explained.