Lies and Truth in the Era of Trump 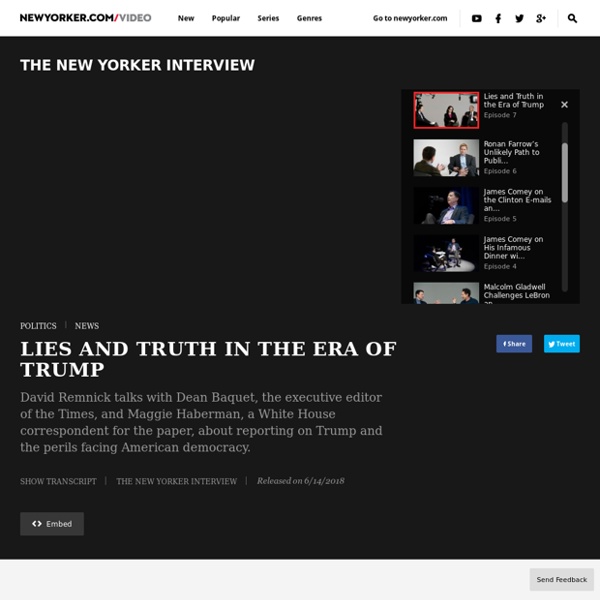 Related:  What the Hell • Trumped Up • Dangerous, Influential Manipulators

Almost all world’s oceans damaged by human impact, study finds Just 13% of the world’s oceans remain untouched by the damaging impacts of humanity, the first systematic analysis has revealed. Outside the remotest areas of the Pacific and the poles, virtually no ocean is left harbouring naturally high levels of marine wildlife. Huge fishing fleets, global shipping and pollution running off the land are combining with climate change to degrade the oceans, the researchers found. Furthermore, just 5% of the remaining ocean wilderness is within existing marine protection areas.

Trump can dodge London’s protests – but Scotland is ready for him Donald Trump thinks he can avoid London’s protests, but Scotland will be ready for him. His bid to avoid the passionate protests against him by bypassing the capital has sparked tittering all across the UK. I can only deduce that, after hearing about those pesky sharia-loving liberal Londoners, the abundance of Scots offering to give Trump a “Glasgow kiss” was only too inviting for the groping-obsessed American. The naivety of the presidential office is almost endearing. After the betrayal of the Brexit vote, Londoners and Scots were instantly united once more – but this time it was down to their shared contempt for a man so repulsive even his own wife won’t hold his hand.

Trapped in a hoax: survivors of conspiracy theories speak out Conspiracy theories used to be seen as bizarre expressions of harmless eccentrics. Not any more. Gone are the days of outlandish theories about Roswell’s UFOs, the “hoax” moon landings or grassy knolls. Instead, today’s iterations have morphed into political weapons. Turbocharged by social media, they spread with astonishing speed, using death threats as currency. How the mega-rich are preparing for the apocalyse - CNN Style Written by Elizabeth Stamp, CNN Say "doomsday bunker" and most people would imagine a concrete room filled with cots and canned goods. The threat of global annihilation may feel as present as it did during the Cold War, but today's high-security shelters could not be more different from their 20th-century counterparts.

A Russian 'troll slayer' went undercover at a troll factory Slaying online trolls can be a lonely business. Just ask Russia’s Lyudmila Savchuk, who first exposed the story of Russia’s disinformation campaign back in 2014. The journalist and 33-year-old mother of two, Savchuk started noticing websites and social media accounts attacking local opposition activists in her hometown of Saint Petersburg with a frequency she hadn’t seen before. The posts were all too similar. The verbal assaults too coordinated. So, when Savchuk later heard that an organization rumored to be behind the campaign — the Internet Research Agency or IRA — was hiring writers, she went for it. Trump prophecy and other Christian movements: 3 essential reads A new film, “Trump Prophecy,” will be shown in some limited theaters on Oct. 2 and 4. The film is an adaptation of a book, co-authored by Mark Taylor, a retired firefighter, who claimed he received a message from God in 2011 that the Trump presidency is divinely ordained. Liberty University film students are reported to have participated in the making of the film. At the same time, however, thousands of Liberty University students are also reported to have signed a petition saying they did not support the film.

Trump's Bungled Twitter Attack on Obama In a pair of tweets, President Donald Trump pushed back at former President Barack Obama for taking partial credit for the post-recession economic recovery. But, in doing so, Trump got the facts wrong: Trump misquoted Obama when he claimed that the former president said, “President Trump would need a magic wand to get to 4% GDP.” In a June 2016 town hall, Obama said Trump would need a “magic wand” to bring back “some of those jobs of the past,” such as manufacturing jobs.Trump wrongly tweeted that the “GDP Rate (4.2%) is higher than the Unemployment Rate (3.9%) for the first time in over 100 years!” Why we need to talk about the media’s role in far-right hate When it comes to the threat of Islamist terrorism, no one doubts the role of radicalisation. The internet, hate preachers such as Anjem Choudary and Abu Hamza, and the western-armed, extremism-exporting state of Saudi Arabia: all play their part in radicalising the impressionable. When it comes to the far right, however, this consensus is absent. The reason for this is as obvious as it is chilling: the hate preachers, recruiting sergeants and useful idiots of rightwing extremism are located in the heart of the British, European and American establishments. They are members of the political and media elite.

Related:
Related:  What the Hell   -  Trumped Up   -  Dangerous, Influential Manipulators