Hillary Clinton's Howard Stern interview absolutely destroyed Bernie Sanders. And in an interview with Howard Stern Wednesday for a new book she co-wrote with her daughter, Chelsea, Clinton absolutely drops the hammer on none other than Vermont Sen. 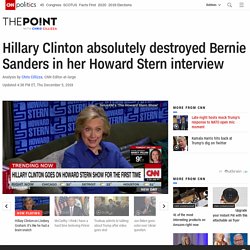 Bernie Sanders. Asked by Stern whether she hated Sanders for the long primary campaign he ran against her in 2016 and the slowness with which he offered his eventual endorsement, Clinton said "I don't hate anybody," before adding about the time it took Sanders to endorse her: "He could have. He hurt me, there's no doubt about it. " Then she delivered the dagger: "And I hope he doesn't do it again to whoever gets the nomination. Once is enough. " Woof. - The Washington Post. Inside Hillary Clinton’s Secret Takeover of the DNC. Before I called Bernie Sanders, I lit a candle in my living room and put on some gospel music. 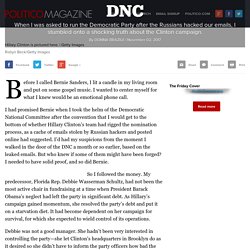 I wanted to center myself for what I knew would be an emotional phone call. I had promised Bernie when I took the helm of the Democratic National Committee after the convention that I would get to the bottom of whether Hillary Clinton’s team had rigged the nomination process, as a cache of emails stolen by Russian hackers and posted online had suggested. I’d had my suspicions from the moment I walked in the door of the DNC a month or so earlier, based on the leaked emails. But who knew if some of them might have been forged? I needed to have solid proof, and so did Bernie. Story Continued Below So I followed the money. Debbie was not a good manager. Donna Brazile: I considered replacing Clinton with Biden as 2016 Democratic nominee. Donna Brazile at the Democratic National Convention in Philadelphia on July 26, 2016. 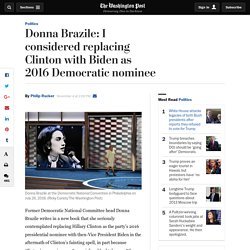 Inside Hillary Clinton’s Surreal Post-Election Life. When I walk into the Chappaqua dining room in which Hillary Clinton is spending her days working on her new book, I am greeted by a vision from the past. 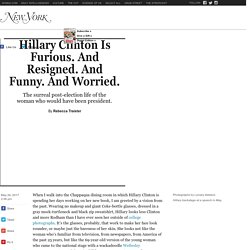 Wearing no makeup and giant Coke-bottle glasses, dressed in a gray mock-turtleneck and black zip sweatshirt, Hillary looks less Clinton and more Rodham than I have ever seen her outside of college photographs. It’s the glasses, probably, that work to make her face look rounder, or maybe just the bareness of her skin. She looks not like the woman who’s familiar from television, from newspapers, from America of the past 25 years, but like the 69-year-old version of the young woman who came to the national stage with a wackadoodle Wellesley commencement speech in 1969. With no more races to run and no more voters to woo with fancy hair, Clinton appears now as she might have if she’d aged in nature and not in the crucible of American politics.

Still, this is not Hillary of the woods. Besides, she argues, “what I was doing was working. Watch FRONTLINE'S 10 Most-Streamed Documentaries of 2016. From investigating the complicated fight against ISIS, to examining Donald Trump’s evolution from businessman to reality-TV star to politician, FRONTLINE’s 2016 documentaries explored a wide range of stories about our country and our world. 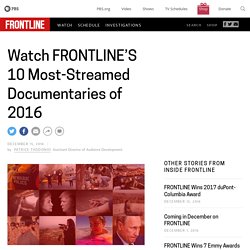 As the year draws to a close, we’re counting down the 10 FRONTLINE documentaries that earned the most digital streams over the past 12 months — and collecting them all in one place, for easy (and, as always, free) viewing. Every day from now through Dec. 24, we’ll reveal a different documentary on the list — starting with No. 10, and ending with No. 1. We’ll also share related reporting on each topic as we go. We hope you’ll bookmark this link and check back daily as the countdown unfolds. #1 – The Choice 2016. Shattered dreams in Clintonworld. Hillary Clinton won New York, but her image is underwater. Democratic presidential candidate Hillary Clinton addressed New York voters after winning the state's primary election. 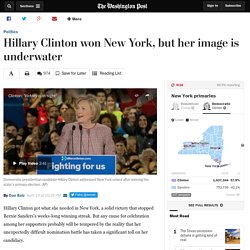 (AP) Hillary Clinton got what she needed in New York, a solid victory that stopped Bernie Sanders’s weeks-long winning streak. But any cause for celebration among her supporters probably will be tempered by the reality that her unexpectedly difficult nomination battle has taken a significant toll on her candidacy. By the end of next week’s contests in Pennsylvania, Maryland, Connecticut, Rhode Island and Delaware, her lead in pledged delegates in all likelihood will be insurmountable. For Sanders, there seemingly will be no path to the nomination other than the unlikely strategy of trying to persuade superdelegates to go against the will of Democratic voters.

By the beginning of May, Clinton will be at liberty to turn her attention to the general election. Vermont Sen. Clinton’s image is at or near record lows among major demographic groups. Local Politics Alerts. Black Lives Matter protesters confront Clinton at a fundraiser. "We want you to apologize for mass incarceration," Ashley Williams said at the Charleston, South Carolina, event. 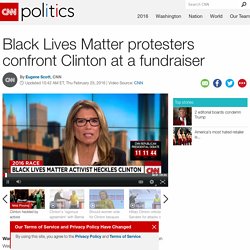 "I'm not a 'super predator,' Hillary Clinton. " Williams was referring to statements Clinton made in New Hampshire during her husband's 1996 presidential re-election campaign, defending then-President Bill Clinton's 1994 crime bill. The bill advocated for tougher policing of gang members. "We need to take these people on. They are often connected to big drug cartels. Williams, holding a banner that said, "We have to bring them to heel. Members of the crowd then began to boo Williams, with some shouting, "You're being rude," "This is not appropriate" and "You're trespassing. " Black Lives Matter protesters confront Clinton at a fundraiser.