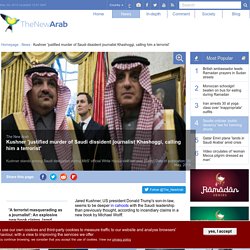 The Fire and Fury author's follow-up book Siege, to be released on June 4, follows the second year of the Trump presidency, containing interviews with some 150 people close to the White House. Khashoggi's gruesome murder and dismemberment in the Saudi consulate in Istanbul is known to have been carried out by state security forces and ordered by Mohammed bin Salman himself, according to the CIA and Turkish intelligence. After some initial criticism from the White House, Trump and his son-in-law downplayed their outrage over the extra-judicial killing. Kushner, who is known to have close contact with MbS following the killing, spoke of Khashoggi to a reporter, saying: "This guy was the link between certain factions in the royal family and Osama. We know that.

Saudi Crown Prince Boasted That Jared Kushner Was “In His Pocket” Until he was stripped of his top-secret security clearance in February, presidential adviser Jared Kushner was known around the White House as one of the most voracious readers of the President’s Daily Brief, a highly classified rundown of the latest intelligence intended only for the president and his closest advisers. 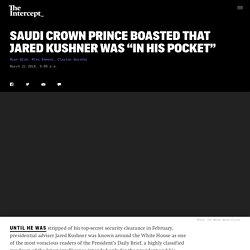 Kushner, who had been tasked with bringing about a deal between Israel and Palestine, was particularly engaged by information about the Middle East, according to a former White House official and a former U.S. intelligence professional. In June, Saudi prince Mohammed bin Salman ousted his cousin, then-Crown Prince Mohammed bin Nayef, and took his place as next in line to the throne, upending the established line of succession.

In late October, Jared Kushner made an unannounced trip to Riyadh, catching some intelligence officials off guard. “Some questions by the media are so obviously false and ridiculous that they merit no response. This is one. Jared Kushner Is China’s Trump Card. In early 2017, shortly after Jared Kushner moved into his new office in the West Wing of the White House, he began receiving guests. 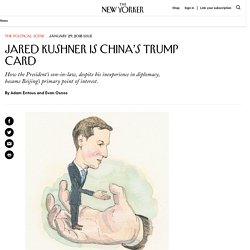 One visitor who came more than once was Cui Tiankai, the Chinese Ambassador to the United States, a veteran diplomat with a postgraduate degree from Johns Hopkins University. When, during previous Administrations, Cui had visited the White House, his hosts received him with a retinue of China specialists and note-takers. Getting to Know You: Jared Kushner. Jared Kushner Failed to Disclose He Led a Foundation Funding Illegal Israeli Settlements Before U.N. Vote. Jared Kushner failed to disclose his role as a co-director of the Charles and Seryl Kushner Foundation from 2006 to 2015, a time when the group funded an Israeli settlement considered to be illegal under international law, on financial records he filed with the Office of Government Ethics earlier this year. 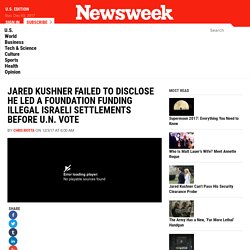 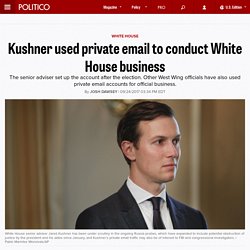 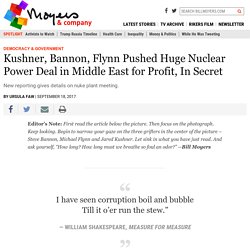 Then focus on the photograph. Keep looking. Begin to narrow your gaze on the three grifters in the center of the picture – Steve Bannon, Michael Flynn and Jared Kushner. Let sink in what you have just read. I have seen corruption boil and bubble Till it o’er run the stew.” — William Shakespeare, Measure for Measure From left: Senior adviser to the president Stephen Miller, former White House chief strategist Stephen Bannon; national security adviser Michael Flynn; senior adviser to the president Jared Kushner; and former White House chief of staff Reince Priebus on Feb. 13, 2017 in Washington, DC. This post first appeared at DailyKos. It’s no wonder that Mike Flynn asked the House and the Senate for immunity and has refused to voluntarily testify before the Senate twice, the last time being Tuesday. This is smoking hot. The Story Behind Jared Kushner’s Curious Acceptance into Harvard. I would like to express my gratitude to Jared Kushner for reviving interest in my 2006 book, “The Price of Admission.” 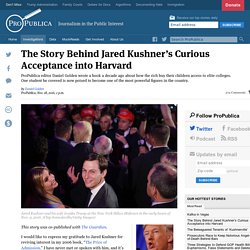 I have never met or spoken with him, and it’s rare in this life to find such a selfless benefactor. Of course, I doubt he became Donald Trump’s son-in-law and consigliere merely to boost my lagging sales, but still, I’m thankful. My book exposed a grubby secret of American higher education: that the rich buy their under-achieving children’s way into elite universities with massive, tax-deductible donations. It reported that New Jersey real estate developer Charles Kushner had pledged $2.5 million to Harvard University in 1998, not long before his son Jared was admitted to the prestigious Ivy League school. Jared Kushner has been concealing the Flynn-Kislyak meeting for months. Mandel Ngan/AFP/Getty Images The Trump administration has a problem telling the truth about Russia. 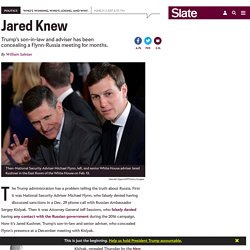 First it was National Security Adviser Michael Flynn, who falsely denied having discussed sanctions in a Dec. 29 phone call with Russian Ambassador Sergey Kislyak. Then it was Attorney General Jeff Sessions, who falsely denied having any contact with the Russian government during the 2016 campaign. Now it’s Jared Kushner, Trump’s son-in-law and senior adviser, who concealed Flynn’s presence at a December meeting with Kislyak. Will Saletan writes about politics, science, technology, and other stuff for Slate.

The meeting between Flynn and Kislyak, revealed Thursday by the New York Times, took place at Trump Tower in December, some time before the two events of Dec. 29: President Obama issuing sanctions against Russia for interfering in the 2016 election and Flynn assuring Kislyak that Trump would review the sanctions. Spicer’s account produced numerous misleading reports. Jared Kushner's charmed life is about to come to a screeching halt. Perhaps Jared Kushner really believed that his New York real-estate skills set him up to bring peace to the Middle East, solve the opioid crisis, run a government SWAT team of business experts and protect his father-in-law from disloyal White House advisers. 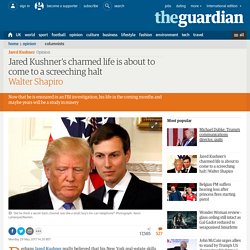 And that he could do it all while observing the Jewish Sabbath and reserving enough time for family ski vacations with Ivanka and their three children. Or maybe Kushner just calculated that all the hype surrounding his White House role was a not-to-be-missed family branding opportunity. Jared Kushner’s life as a predatory capitalist. Dominique A. 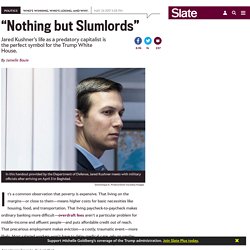