The Hills, they are alive with Hillary

How the Russia Spin Got So Much Torque. A new book about Hillary Clinton’s last campaign for president – Shattered, by journalists Jonathan Allen and Amie Parnes – has gotten a lot of publicity since it appeared two weeks ago. 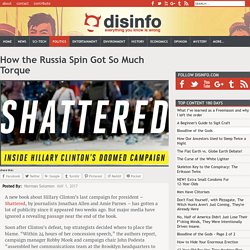 But major media have ignored a revealing passage near the end of the book. Soon after Clinton’s defeat, top strategists decided where to place the blame. “Within 24 hours of her concession speech,” the authors report, campaign manager Robby Mook and campaign chair John Podesta “assembled her communications team at the Brooklyn headquarters to engineer the case that the election wasn’t entirely on the up-and-up. For a couple of hours, with Shake Shack containers littering the room, they went over the script they would pitch to the press and the public. Already, Russian hacking was the centerpiece of the argument.” Six months later, that centerpiece of the argument is rampant — with claims often lurching from unsubstantiated overreach to outright demagoguery. Ex-DNC aide hits back hard at Clinton, says her campaign ignored data on Michigan, Pennsylvania, Wisconsin. By Aaron Blake By Aaron Blake The Fix Analysis Analysis Interpretation of the news based on evidence, including data, as well as anticipating how events might unfold based on past events. 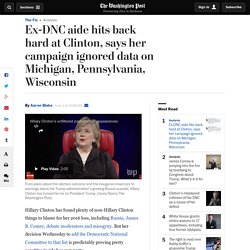 How the Russia Spin Got So Much Torque. Hillary Clinton's Devastating Loss Came After 4 Decades Of Breaking Molds. Former Secretary of State Hillary Clinton boards her plane during the final days of the 2016 campaign bound for a day of Florida campaigning in Miami on Tuesday, Oct. 26 — her 69th birthday. 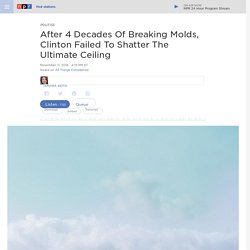 Melina Mara/The Washington Post/Getty Images hide caption toggle caption Melina Mara/The Washington Post/Getty Images. WikiLeaks' 10 Most Damning Clinton Emails that Prove Mainstream Media is Scripted & Controlled. Washington, D.C. – With information coming out of WikiLeaks at a fast and furious pace, it’s difficult for the average person to keep up with the many bombshell revelations being exposed. 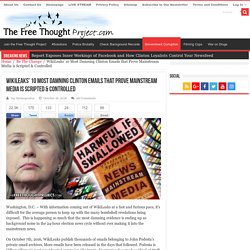 This is happening so much that the most damning evidence is ending up as background noise in the 24-hour election news cycle without ever making it into the mainstream news. On October 7th, 2016, WikiLeaks publish thousands of emails belonging to John Podesta’s private email archives. Understanding Hillary: The Clinton America sees isn’t the Clinton colleagues know. Why are they so different? This is not a profile of Hillary Clinton. 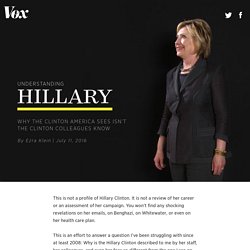 It is not a review of her career or an assessment of her campaign. You won’t find any shocking revelations on her emails, on Benghazi, on Whitewater, or even on her health care plan. This is an effort to answer a question I’ve been struggling with since at least 2008: Why is the Hillary Clinton described to me by her staff, her colleagues, and even her foes so different from the one I see on the campaign trail?

I’ve come to call it “the Gap.” There is the Hillary Clinton I watch on the nightly news and that I read described in the press. The Iraq War mars her record, and the private email server and the Goldman Sachs paydays frustrate even her admirers. Clinton rally, Raleigh, North Carolina, June 2016. And then there is the Hillary Clinton described to me by people who have worked with her, people I admire, people who understand Washington in ways I never will. Donald Trump tweets: "Crooked Hillary and myself, should release detailed medical records" 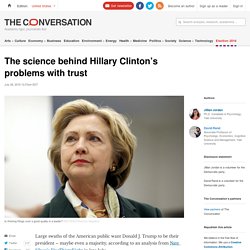 Trump to be their president – maybe even a majority, according to an analysis from Nate Silver’s FiveThirtyEight in late July. Many people – Democrats and Republicans alike – find this shocking. Trump made his name as the “You’re fired” guy. He has never held political office, has arguably failed to generate concrete or realistic policy proposals, regularly changes his positions on issues and consistently gets the facts wrong. This stands in sharp contrast to Hillary Clinton, who has served as secretary of state, senator from New York and first lady of the United States. How to build trust. The Best Reporting on Hillary Clinton Over the Years. This story was updated to restore a paragraph with additional links that was accidentally omitted during the editing process. 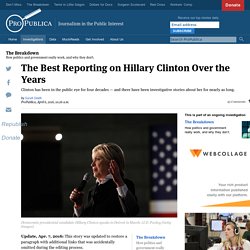 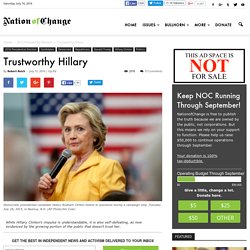 As of mid-July (even before Trump enjoys a predictable post-convention bump in the polls) she is tied with him. Each garners the support of 40 percent of voters. This is astounding, given that Trump’s campaign is in shambles while hers is a well-oiled machine; that he’s done almost no advertising while she began the month spending $500,000 a day on ads; and that Republican leaders are deserting him while Democrats are lining up behind her. The near tie is particularly astonishing given that Trump has no experience and offers no coherent set of policies or practical ideas but only venomous bigotry and mindless xenophobia, while Hillary Clinton has a boatload of experience, a storehouse of carefully-crafted policies, and a deep understanding of what the nation must do in order to come together and lead the world. 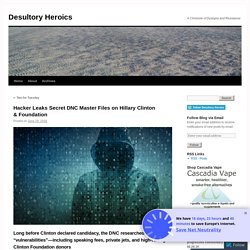 The documents reveal that the DNC was particularly worried about Clinton’s speaking fees, her book advance, and her somewhat exacting luxury travel requirements for appearances. As the Daily Beast summarized: A Year Of Hillary Clinton. Meet the Bernie Sanders Supporter Who Debated Bill Clinton for 30 Minutes at a New Mexico Restaurant. Guests Josh Brody 24-year-old graduate of The New School. 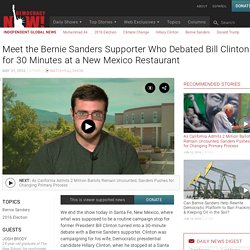 He confronted former President Bill Clinton last week during a campaign stop in Santa Fe, New Mexico. This is viewer supported news Donate We end the show today in Santa Fe, New Mexico, where what was supposed to be a routine campaign stop for former President Bill Clinton turned into a 30-minute debate with a Bernie Sanders supporter. This is a rush transcript. Seattle Activist Sarra Tekola Runs Into Bill Clinton in Los Angeles, Curses Him Over Crime Bill. Sarra Tekola in Anacortes during anti-fossil fuel protests last month. Alex Garland On Saturday, 23-year-old Sarra Tekola was visiting family in Los Angeles.

Zombie time at campaign Hillary: Camille Paglia on Trump’s real strength and Clinton’s fatal sleepwalking. It’s zombie time at campaign Hillary. Behold the dead men walking! It was with strangely slow, narcotized numbness that the candidate and her phalanx of minions and mouthpieces responded to last week’s punishing report by the State Department’s Inspector General about her email security lapses. Do they truly believe, in the rosy alternate universe of Hillaryland, that they can lie their way out of this? Of course, they’re relying as usual on the increasingly restive mainstream media to do their dirty work for them. If it were a Republican in the crosshairs, Hillary’s shocking refusal to meet with the Inspector General (who interviewed all four of the other living Secretaries of State of the past two decades) would have been the lead item flagged in screaming headlines from coast to coast.

Over on the GOP side, Donald Trump continues to gain strength, despite the nonstop artillery barrage of Democratic operatives and their clone army in the mainstream media. Hi Camille, Polls show Clinton, Trump tied in likely November matchup, record un-favorability. Two polls released Sunday show Democratic presidential front-runner Hillary Clinton tied with presumptive Republican nominee Donald Trump in a likely general election race, after having a double-digit lead just months ago. Clinton leads Trump 46-to-43 percent in a NBC News/Wall Street Journal poll, compared to a similar one in April in which Clinton had an 11-point lead. The new poll also shows Clinton primary rival Vermont Sen. Bernie Sanders leading Trump by 15 percentage points, 54-to-39 percent, in a hypothetical November matchup. 'Clinton Cash' doc set to stir up controversy as it debuts at Cannes.

CANNES, France — A massive police force will be guarding the Cannes Film Festival this year. But the only scuffle on the horizon may come in response to the right-wing producers of a devastating new documentary about Bill and Hillary Clinton’s alleged influence peddling and favor-trading. That film, “Clinton Cash,” screens here May 16 and opens in the U.S. on July 24 — just before the Democratic National Convention. The allegations are as brazen as they are controversial: What other film at Cannes would come up with a plot that involves Russian President Vladimir Putin wrangling a deal with the alleged help of both Clintons, a Canadian billionaire, Kazakhstan mining officials and the Russian atomic energy agency — all of which resulted in Putin gaining control of 20 percent of all the uranium in the U.S.? RELATED: Latest anti-Clinton book promises to be most ‘fantastic’ yet It packs the kind of Trump-esque mainstream punch that may have the presumptive GOP nominee salivating.

Hillary’s atrocious race record: Her stances over decades have been painful and wrong. 6 times Hillary Clinton lost her cool. Quotations From Madame Hillary. Inevitability Lost: the Clintonites Strike Back. I never thought I’d see the day, I don’t think anybody imagined it would happen, but, by late December, Bernie Sanders’ campaign had caught on to such an extent that corporate media and National Public Radio, corporate media’s fellow traveler, could no longer pretend that it wasn’t happening. We do not need another Clinton administration. If only Sanders would say it. Bernie Sanders has already done more to advance Social Democratic values and policies than anyone in U.S. American history, and for that I treasure him. He has a gut-level passion about inequality, poverty and injustice. He fights for equality with a tenacity surpassing any elected official since the New Deal.

He is rightly outraged that the tax system is skewed to make equality worse, that the megabanks have become too-big-to-fail hedge funds trading on their own accounts, and that Republican leaders are bent on destroying Medicare and Social Security. Sanders is the most morally serious candidate in the presidential race by virtue of pressing so strongly on these issues. Hillary Clinton Calls Out GOP 2016 Hopefuls Who Backed Republican Letter To Iran. Former Secretary of State Hillary Clinton, who is widely considered to be a potential Democratic candidate for president in 2016, criticized GOP presidential hopefuls who threw their support behind a letter sent to Iran by Republican senators. EXPERT: Hillary showed 'high level of discomfort' during press conference - Business Insider. To Avert Repeat of 2008, Clinton Team Hopes to Keep Bill at His Best.

“After dedicating a few hours in the morning to drawing a lot of focus, laying groundwork, and calculating risks, Mrs. 15 Awesome Lies About Hillary Clinton. Clinton comes out swinging in first major 2016 speech: ‘When women are held back, our country is held back’ Campaign 2016: Hillary Clinton's Fake Populism Is a Hit. Hillary Clinton ran onto the playing field this week, Rock and Roll Part 2 blaring in the background, and started lying within minutes of announcing her entry into the presidential election campaign. "There's something wrong," she told a crowd of Iowans, "when hedge fund managers pay lower taxes than nurses or the truckers I saw on I-80 when I was driving here over the last two days.

" Oh, right, that. The infamous carried interest tax break, the one that allows private equity vampires like Mitt Romney and Stephen Schwartzman to pay a top tax rate of 15 percent while all of the rest of us (including the truckers Hillary "saw" – note she didn't say "hung out with Bill and me over chilled shrimp at the Water Club") pay income taxes. The carried interest loophole is an absurd, completely unjustifiable handout to the not merely well-off but filthy rich, and it's been law in this country for about three decades. We'll come back to that in a minute. Man Pleased To Find Most Of His Mid-’90s Anti-Hillary Rant Still Usable. Candidate Profile: Hillary Clinton. On Hillary Clinton's Age, Republican Rivals Imply. The Beltway’s Clinton derangement syndrome: What I saw inside a Hillary campaign briefing. Hillary in Free Fall: What Happens Next? Newly Released Emails Show Obama Aides Knew Of Hillary Clinton's Private Email As Early As 2009.