Log In - New York Times. As the Russians gradually assumed control of Uranium One in three separate transactions from 2009 to 2013, Canadian records show, a flow of cash made its way to the Clinton Foundation. Uranium One’s chairman used his family foundation to make four donations totaling $2.35 million. Those contributions were not publicly disclosed by the Clintons, despite an agreement Mrs. Clinton had struck with the Obama White House to publicly identify all donors. Other people with ties to the company made donations as well. And shortly after the Russians announced their intention to acquire a majority stake in Uranium One, Mr. Photo. Think You Know How Bad the Clintons Are? © Jack Cashill AmericanThinker.com - October 24, 2016 “The White House is like a subway. 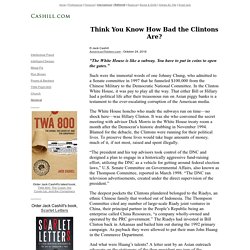 You have to put in coins to open the gates.” Such were the immortal words of one Johnny Chung, who admitted to a Senate committee in 1997 that he funneled $100,000 from the Chinese Military to the Democratic National Committee. Hillary Clinton and the Brutal Murder of Gaddafi. On October 20, 2011, Libya’s Muammar al-Gaddafi was brutally murdered by a mob of NATO-backed ‘rebels’, after first being beaten and violated in the most barbaric fashion. 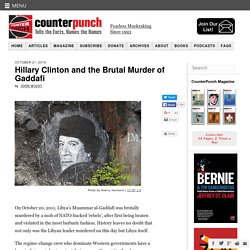 History leaves no doubt that not only was the Libyan leader murdered on this day but Libya itself. The regime-change crew who dominate Western governments have a long indictment sheet against their names. Since 9/11 they have wrought havoc and human misery on a grand scale in their determination to reshape and own a world that has never been theirs to own. Afghanistan, Iraq, Libya – Syria currently embroiled in a pitiless conflict for its survival as a secular, non-sectarian state – this is the miserable legacy of nations which speak the language of democracy while practising the politics of domination. 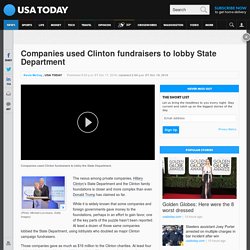 The nexus among private companies, Hillary Clinton’s State Department and the Clinton family foundations is closer and more complex than even Donald Trump has claimed so far. While it is widely known that some companies and foreign governments gave money to the foundations, perhaps in an effort to gain favor, one of the key parts of the puzzle hasn’t been reported: At least a dozen of those same companies lobbied the State Department, using lobbyists who doubled as major Clinton campaign fundraisers. 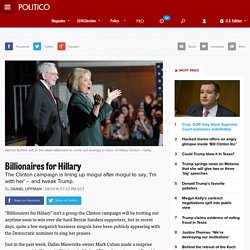 Just in the past week, Dallas Mavericks owner Mark Cuban made a surprise appearance with Clinton in Pittsburgh, Michael Bloomberg slammed Donald Trump at the Democratic convention in Philadelphia last week and on Monday night, investing guru Warren Buffett, the “Oracle of Omaha,” touted Clinton at a campaign stop in his Nebraska hometown. Story Continued Below Buffett, introducing Clinton at a rally at an Omaha high school, goaded Trump to release his tax returns and mocked his explanations for why he couldn’t release them before the election. It’s all a concerted effort to undercut one of Trump’s main campaign messages: that he’s a successful businessman who can make America's economy hum again. 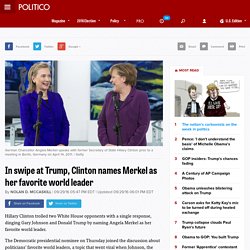 The Democratic presidential nominee on Thursday joined the discussion about politicians’ favorite world leaders, a topic that went viral when Johnson, the Libertarian nominee, drew a blank when asked Wednesday to name a world leader he looks up to and respects. Story Continued Below “Oh, let me think. Look, I like a lot of the world leaders,” Clinton said, bursting into laughter initially when asked about her favorite world leader during a gaggle with reporters aboard her campaign plane in Chicago. “One of my favorites is Angela Merkel because I think she’s been an extraordinary, strong leader during difficult times in Europe, which has obvious implications for the rest of the world and, most particularly, our country.” Someone using Tor breached email account on Clinton server. An unknown individual using the encrypted privacy tool Tor to hide their tracks accessed an email account on a Clinton family server, the FBI revealed today. 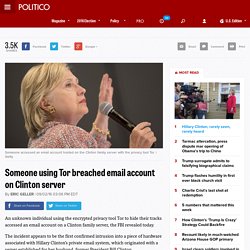 The incident appears to be the first confirmed intrusion into a piece of hardware associated with Hillary Clinton’s private email system, which originated with a server established for her husband, former President Bill Clinton. Story Continued Below. Hillary faces voters' wrath for alleged ethnic slur. State Dept. misplaced $6B under Hillary Clinton: IG report. NY Times: Hillary Clinton Approved Russian Uranium Deal After $2 Million Donation to Clinton Foundation. The New York Times is suggesting Hillary Clinton took actions as secretary of state because of financial donations that were made to the Clinton Foundation by Russians pushing for a Canadian uranium company. 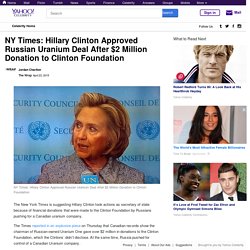 The Times reported in an explosive piece on Thursday that Canadian records show the chairman of Russian-owned Uranium One gave over $2 million in donations to the Clinton Foundation, which the Clintons’ didn’t disclose. At the same time, Russia pushed for control of a Canadian Uranium company. A Kremlin-connected bank promoting stock in the company also reportedly paid Bill Clinton $500,000 for a speech in Moscow. Eventually, the Russian-Canadian uranium deal was approved. Cash Flowed to Clinton Foundation as Russians Pressed for Control of Uranium Company. Beyond mines in Kazakhstan that are among the most lucrative in the world, the sale gave the Russians control of one-fifth of all uranium production capacity in the United States. 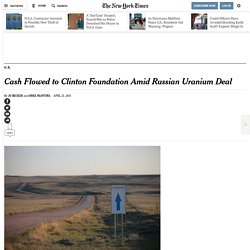 Since uranium is considered a strategic asset, with implications for national security, the deal had to be approved by a committee composed of representatives from a number of United States government agencies. Among the agencies that eventually signed off was the State Department, then headed by Mr. Clinton’s wife, . As the Russians gradually assumed control of Uranium One in three separate transactions from 2009 to 2013, Canadian records show, a flow of cash made its way to the Clinton Foundation. Uranium One’s chairman used his family foundation to make four donations totaling $2.35 million. And shortly after the Russians announced their intention to acquire a majority stake in Uranium One, Mr. Photo. 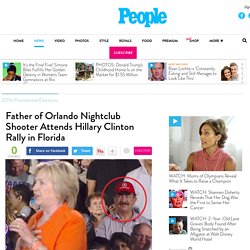 Go Inside a Protest at the DNC With This 3D 360-Degree Video. Hillary Clinton and Electoral Fraud. Exit Polls: Why They Have Been Significantly Off “Over the past decades, exit polling has evolved into an exact science. 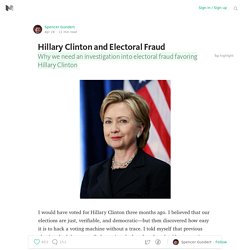 Indeed, among pollsters and statisticians, such surveys are thought to be the most reliable…Exit polls in Germany, for example, have never missed the mark by more than three-tenths of one percent. ‘Exit polls are almost never wrong,’ Dick Morris, a political consultant who has worked for both Republicans and Democrats, noted after the 2004 vote. Such surveys are ‘so reliable,’ he added, ‘that they are used as guides to the relative honesty of elections in Third World countries.’ In 2003, vote tampering revealed by exit polling in the Republic of Georgia forced Eduard Shevardnadze to step down. There are two main types of election polls: pre-election and exit. Pre-election polls predict how people will vote; exit polls tell how people voted. When the polls close in each primary, media organizations release the full exit polling data.

As Robert F. Libyan Oil, Gold, and Qaddafi: The Strange Email Sidney Blumenthal Sent Hillary Clinton In 2011. Two weeks after France began bombing Libya, in March, 2011, Hillary Clinton's old friend and advisor Sidney Blumenthal passed her an intelligence memo that supposedly revealed France's true — and quite unflattering— motivations for toppling Libyan dictator Muammar Qaddafi. While France's then-President Nicolas Sarkozy publicly said he wished to free the Libyan people from tyranny, Blumenthal's memo argues that he was driven by a cocktail of less lofty incentives, including a desire for Libyan oil, and a fear that Qaddafi secretly planned to use his vast supply of gold to displace France's primacy in the region.

Libya watchers aren't so sure that Blumenthal was passing the US Secretary Of State solid intelligence. "For me, it's not credible," former French diplomat and Libya expert Patrick Haimzadeh told VICE News when asked about the Blumenthal memo. Anonymous Just Blew The Lid Off Of Hillary Clinton's Past. Face It: A Vote for Hillary Clinton Is a Vote for War. Can we please stop kidding ourselves that the likely Democratic candidate is different from most of her would-be Republican rivals? Less than a week out from the next Democratic debate—and less than a month from the Iowa caucuses—it’s time for all of us to acknowledge what is plainly true: A vote for Hillary Clinton is a vote for war. Liberals shouldn’t kid themselves that the presumptive Democratic presidential nominee is very different from the Republican frontrunners on this score.

Conservatives should stop pretending too, so they can get on with digging into areas where true policy differences between the Democrats and Republicans might actually mean something. And the rest of us who are appalled at the incalculable human costs of a demonstrably failed, bipartisan, interventionist foreign policy that has accomplished next to nothing for all of the 21st century can get on with figuring out how to fight back against persistent war hysteria. Hillary Clinton lying for 14 minutes straight. (SFW Version) Clinton Email: Assad Must Be Toppled to Protect Israel. Get short URL.